Is there any truth to the commonly held perception that Pakistan has a love-hate relationship with the US?

This is a popular sound byte. But relations between countries are not the same as inter-personal relations. They are neither about love nor hate. Countries, including Pakistan, follow that well-known maxim: “There are no permanent friends or permanent enemies in international relations; there are only permanent interests.”

But it is also true that Pakistan-US relations have had a roller-coaster character, marked by an erratic stop-go pattern in which Pakistan has swung between being America’s “most allied ally” and “most sanctioned friend,” to “disenchanted ally.” This is what has fed the popular perception you refer to.

What have been the major irritants in this relationship?

Issues of friction have varied at different times and phases of relations. In the 1990s for example, disagreements were over Pakistan’s nuclear programme. For Pakistan, its security took precedence over all else, as it would for any other country. In the post 9/11 period, the issue of contention was terrorism — how to counter it, America’s conduct of the war in Afghanistan and the manner in which this was pushed into Pakistan with destabilising consequences.

Issues of contention have varied — and each country will pursue its own interests. But the episodic nature of our ties has also reflected the fact that this has, for the most part, been an event-driven relationship. In its current phase, Pakistan has felt that Washington has tended to deal with it solely through the prism of Afghanistan and expected Islamabad to subordinate its interests to America’s shifting goals next door. Pakistan wants America to have a Pakistan policy in the future so that relations are predicated on Pakistan’s intrinsic importance, not a third country.

What were the challenges you faced in your tenure?

I had two tenures. In the first during the 1990s, my task was to defend Pakistan’s interests on the nuclear issue and to persuade Washington and the US Congress to end discriminatory sanctions. We were able to live up to this challenge.

My second tenure was more challenging in that I was there when 9/11 happened, so dealing with that situation while protecting Pakistan’s interests took me and my team into uncharted territory. The biggest challenge in ‘working’ Washington is to deal with multiple centres of power and influence that determine foreign policy. This is complex and never easy.

It is generally believed that:

a) Republicans are more supportive of Pakistan than Democrats

b) All US governments are more comfortable working with military governments.

The historical record doesn’t quite support your first or even second question. There is significant bipartisan consensus in America on foreign policy. Relations have lurched between engagement and estrangement and gone through ups and downs under both Republican and Democratic administrations, and on the Pakistani side, under democratic and military governments alike. This means that irrespective of any government’s complexion on either side, our relations have been determined by interests — and their periodic alignment or clashes.

In the context of the war on terror in Pakistan, the US has continued to ask Pakistan to do more and more. Is there any understanding or realisation of what Pakistan itself has suffered in the war or terror?

First of all, I think we should retire this unfortunate term ‘war on terror’ that is deeply flawed in how it conceives the threat and frames the response. Almost every country has dropped the phrase, but we still use it. On your question, yes, Washington acknowledges the heavy price — in lives, treasure and social stability — Pakistan has paid to fight militant violence. But in both countries, popular perceptions mirror the other. Each side thinks the other could have “done more” or “done things differently.” These mutual perceptions have created a negative context for the relationship, undermined ties and impeded cooperation.

This government, as also previous ones, has talked of trade not aid from the US. Is this a realistic demand given the situation in Pakistan?

Market access is what Pakistan badly needs. Looking ahead, this should be the test of whether there has been a reset of relations after Prime Minister Nawaz Sharif’s October visit to Washington. He was right to say Pakistan doesn’t want aid. I strongly believe an aid relationship has a corrosive impact on ties. It has also fuelled the view on Capitol Hill that Pakistan is some sort of “hired help.” Aid reduces Pakistan to a supplicant. Trade is a legitimate expectation.

In his book Shooting for a Century, Stephen Cohen maintains that the US policy apparatus for South Asia has been severely deficient and dysfunctional. Do you agree? Also that the US policy of dehyphenation in the context of India and Pakistan has worked in India’s favour. Should Pakistan be feeling insecure about the US’s growing links with India?

The policy framework the Obama administration adopted, epitomised by the ‘AfPak’ construct, was deeply flawed. This hyphenation was a policy convenience, not a reflection of reality. It lacked strategic rationale and sent all the wrong signals to Pakistan. The most damaging was that Pakistan would be treated as a function of Afghanistan and not in its own right. This reinforced the impression that Washington pursued relations from a transactional and tactical perspective.

The revival of the strategic dialogue between the two countries aims to get past this by according primacy to bilateral relations, and not as a subset of regional concerns. Let us see how this progresses and whether it leads to dehyphenation from Afghanistan.

As for dehyphenation from India, yes this has had a deleterious impact on our relations. But then reality can’t be wished away by policy constructs. Pakistan has felt Washington has been insensitive to its security concerns vis-a-vis India, practicing double standards on the nuclear issue, and uninterested in a ‘Kashmir spring,’ while extolling the virtues of democracy elsewhere.

Do you see the US using its offices to push for a Kashmir solution despite Indian resistance?

US reluctance over the years to play a role stems from its unwillingness to annoy Delhi. Washington also claims not to have sufficient leverage. Again, reality dictates that a just solution be found to Kashmir — with or without third party help. Without movement on this and other disputes, Pakistan-India normalisation will not achieve its full potential.

“Dehyphenation from India has had a deleterious impact on our relations. Pakistan has felt Washington has been insensitive to its security concerns vis a vis India, practicing double standards on the nuclear issue, and uninterested in a ‘Kashmir spring,’ while extolling the virtues of democracy elsewhere.” 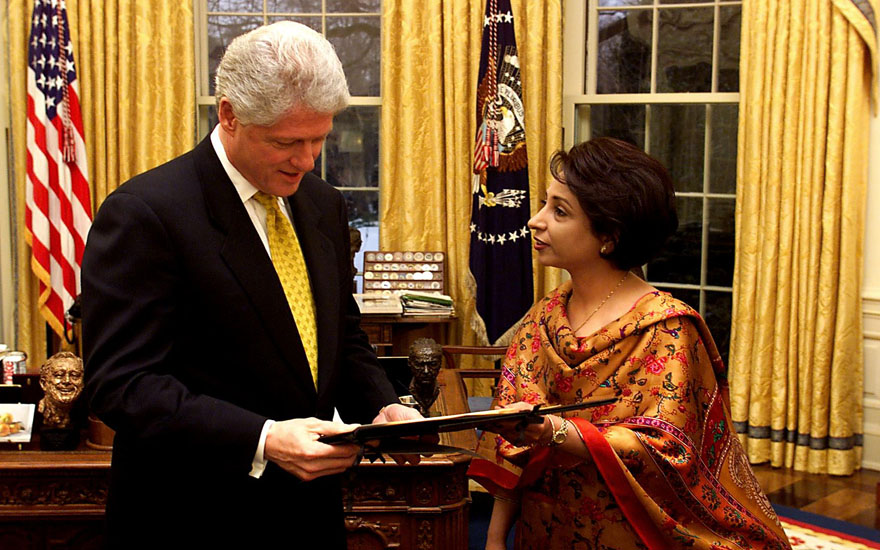 Does the US see Pakistan as a help or hindrance on the road to peace in Afghanistan?

America acknowledges that Pakistan has a vital role to play in efforts to bring peace to Afghanistan. Islamabad played a key role in the Doha process that aimed to install a full-fledged Afghan peace process. Sadly, that process stalled. Islamabad wants a revival of Doha but in the meanwhile, it has reached out to Kabul to offer help in support of the reconciliation effort to achieve an inclusive political settlement. But we should guard against exaggerated expectations.

The Americans will be leaving Afghanistan next year. Do you fear, as most Pakistanis do, that Pakistan will suffer the same fate, or worse, that it did post-1989, following the end of the Cold War?

Today, Afghanistan is at another critical juncture with three key transitions ahead — political, security and economic — that constitute part of NATO’s exit strategy. Pakistan has a deep interest in these because peace and stability in Afghanistan is linked in multiple ways to peace and stability in Pakistan. But whereas these transitions were to be underpinned and glued together, in mutual reinforcement, by progress in Afghan peace talks, they have yet to even start. The transitions are unfolding in an uncertain fashion which is accentuating Pakistan’s security anxieties.

Pakistan wants the fighting to end in Afghanistan, well ahead of December 2014. If it doesn’t, the danger looms of turmoil in post-2014 Afghanistan. Pakistan does not want 2014 to become another 1989 or 1992. It should do everything to help avert such an outcome but it should be prepared for the worst.

Which areas do Pakistan and the US need to particularly work in to develop a measure of trust?

The advent of the Nawaz Sharif government offers a fresh opportunity to redefine post-2014 relations. We need to build on areas of convergence and address or manage areas of divergence. Relations need to be predicated on a more normal, stable and predictable footing. Shared strategic objectives include: 1) defeating Al Qaeda and violent extremism 2) promoting a peaceful settlement in Afghanistan and 3) strengthening peace and stability in nuclear South Asia.

But there are also differences that need to be addressed. They include: 1) continued US drone attacks 2) allegations of ‘safe havens’ in Pakistan 3) Pakistan’s concern about use of Afghan territory by TTP militants and 4) discriminatory US nuclear policy towards South Asia.

The strategic dialogue later this year will be the first measure of whether trust is being rebuilt. 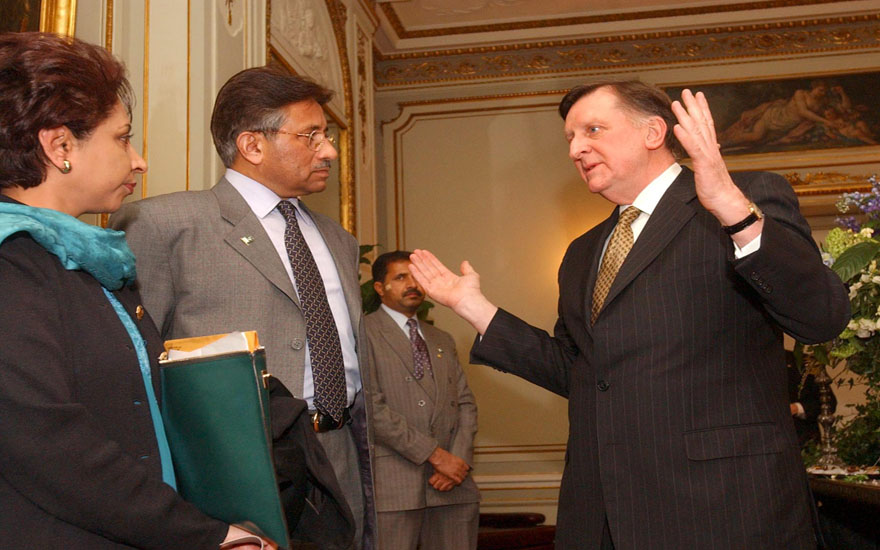 “Market access is what Pakistan badly needs. Looking ahead, this should be the test of whether there has been a reset of relations after Prime Minister Nawaz Sharif’s October visit to Washington. He was right to say Pakistan doesn’t want aid. I strongly believe an aid relationship has a corrosive impact on ties. It has also fuelled the view on Capitol Hill that Pakistan is some sort of ‘hired help.’

Ostensibly Prime Minister Nawaz Sharif failed to secure any concessions, any promises from President Obama on his trip to the US: drones, Kashmir, Afia Siddiqi. Both agreed to disagree. Would that be a correct assessment?

This visit should be assessed from a broader perspective. Both in terms of public optics and outcome, the visit was positive. It marked the start of a reset of relations after years of crises. The joint statement charted out areas of future cooperation. Both want to get past the past and reconfigure ties for the post-2014 era, even as they jointly negotiate a challenging year ahead. This opens possibilities for a new chapter in relations. This doesn’t mean areas of contention have disappeared. But with an improved tenor in relations and better atmospherics, there is a new opportunity to reconcile differences.

Whoever foots the bill calls the shots. Is this not a recurring reality in the US-Pak relationship?

If this were true, Pakistan would never have become a nuclear power. We braved sanctions, censure and embargoes to achieve what we regarded to be in our supreme national interest. No carrot or stick tempted or deterred Pakistan from securing that objective.