On September 24, 2013 at around 4:30 pm, an earthquake hit Awaran in Balochistan in which reportedly 400 people died and thousands became homeless. The district is thinly populated and incidentally a large number of people had already emigrated to safer places because of an impending drought and a low intensity insurgency situation in the area. Had they not, the death toll would have been much higher. 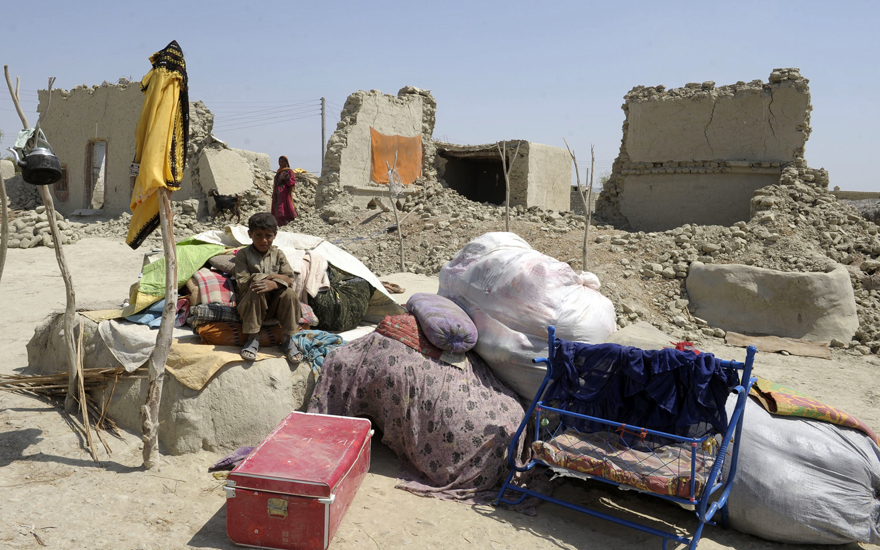 Calamity strikes: Thousands of people are displaced by an earthquake.

Such calamities are, however, not new to the province. Quetta was almost completely devastated in 1935 by an earthquake, and in 1945 a strong quake caused a tsunami that hit the coastal belt, uprooting the Pasni coastal town, not far from Awaran. The recent quake has already created a mystical history with the surprising emergence of a mysterious island off the Gwadar coast.

This is not the first time something like this has happened. The first recorded case of this kind was after the 1945 quake when three of these Atlantises made an appearance near Malan on the same coast between Ormara and Pasni towns. Balochistan is prone to such frequent and violent seismic activity. Not surprisingly, while its strategic location has been the subject of much military and political debate, the province also has a tectonically important location as well. It is unique that Balochistan consists of three tectonic plates. These form the western boundary of the Indian plate, and are also absorbing immense pressure from the Arabian plate in the south, which is subducting under the Eurasian plate in the Makran Subduction Zone.

Subduction occurs when, in the case of two plates, a head-on collision and crumpling is avoided as one plate starts to creep or slip under the other. This movement does not, however, come without some crumpling and chances of frequent seismic activity. The seismic events caused by all the tectonic movements around Makran have been studied and researched, by the seismologist Charles Francis Richter, from whose name comes the term ‘Richter Scale.’
Awaran, where time has frozen and life is at a standstill, is a godforsaken barren land, which was known as Gadrosia in ancient times. It used to be an ancient land route between Persia and India, from where many invaders and travelers have criss-crossed through centuries. But due to the harsh climate and hostile environment no traces of any historic activity are left intact except for the grave of the legendary Sherin Ferhad, which lies on a hillock on a main road.

According to the Greek author Arrian of Nicomedia (who wrote Anabasis), while retreating from India in the autumn of 325 BC, Alexander led his men through Gadrosia (the present day coastal belt of Makran including Awaran) desert. Many soldiers, women, merchants and animals died in the terrain. No one had ever succeeded in bringing an army safely through the land, neither the legendary Queen Semiramis, wife of Nimrod the King of Babylon, on her retreat from India, nor Cyrus the Great, son of Cambyses.

It was again the same Gadrosia (later known as Makran) which was conquered by the Arab forces in Hazrat Umar’s era, who sent a dispatch to his headquarters saying that it is a difficult land to rule, as a small force would be crushed and large force would die of hunger and thirst. Again it was the same region where, during the Great Baloch migration, the Baloch legendary hero Chaker Khan was born. The famous Baloch political stalwart Mir Ghous Bakhsh Bizenjo was also born in this area. 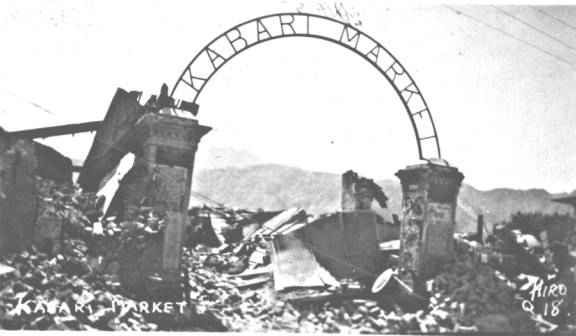 The land is situated strategically, facing the serene waters of the Arabian Sea near the strait of Hormuz, the jugular vein of Gulf Oil export from to the world. It is a five-hour drive from the country’s glittering megacity of Karachi. It was almost entirely unknown to the outside world till the afternoon of September 24 this year, when the earthquake occurred. News of the devastation of the tiny impoverished settlements of this desolate Baloch land was flashed by the electronic media and made headlines globally. 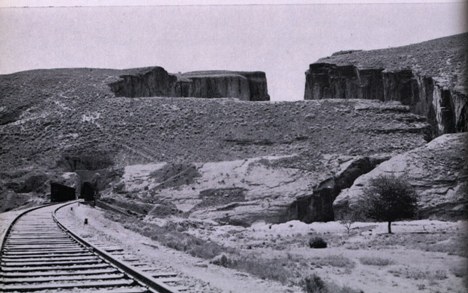 Awaran is an arid zone. Its only source of living is livestock and very meagre agriculture produce. The life here depends only on rainwater, which is scanty. Most of the people are peasants, tilling the land for the few petty landowners. Thanks to Iranian smuggled diesel oil, some irrigation is done through tube wells. Its sand dunes are reported to be rich in uranium, for now buried deep down and only to be unearthed at the time of need.

It is no secret that this is one of the biggest routes of drug and human trafficking and the kingpin of the smugglers of the regions has his safe heaven here in this desert — well known yet undisturbed.
There is little infrastructure in the district and what is available is in shambles. Also there is no electricity throughout the district, save for some electricity generators, which are used by only a few lucky ones. The area has had elected representatives of its own but alas their feet have not touched the soil from where they derive their fortune and instead they live in luxury in bigger cities. 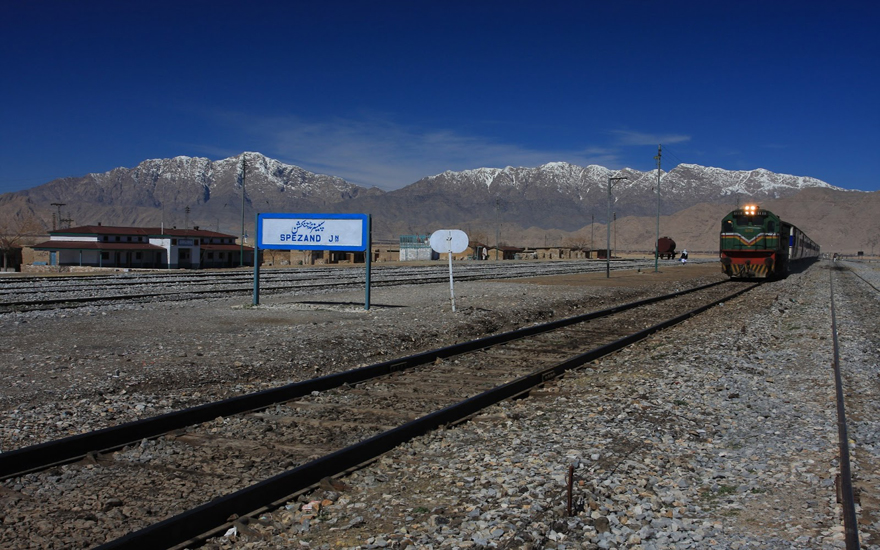 Bad luck struck the area during the British Raj when a plan to construct a railway line from Karachi through Lasbela, going up to the north of Balochistan all the way to Seistan (a Baloch Town in Iran) — which would have connected India to Europe — was dropped. It was due to the sudden death of one of the British Empire builders, Robert Sandeman, the famous architect of The Forward Policy (a policy on managing the frontier), in Lasbela, where he had gone to discuss the plan with Baloch leaders. One can only imagine how that ambitious plan would have changed the fate of this and many other godforsaken hinterlands.

Today a portion of the proposed Gwader-Kashghar High Way passes through here. It is only a narrow, debilitated shingle road which starts from Turbat and goes to Karachi through Lasbela. Millions have been spent on this road and the process will perhaps continue in the same way in the days to come. It is worth mentioning here that some decades ago a contract of billions of rupees was awarded to the son-in-law of a late president for construction of this road, but except for a few culverts and pillars of a few bridges there is no trace of any work, and no one was made accountable. 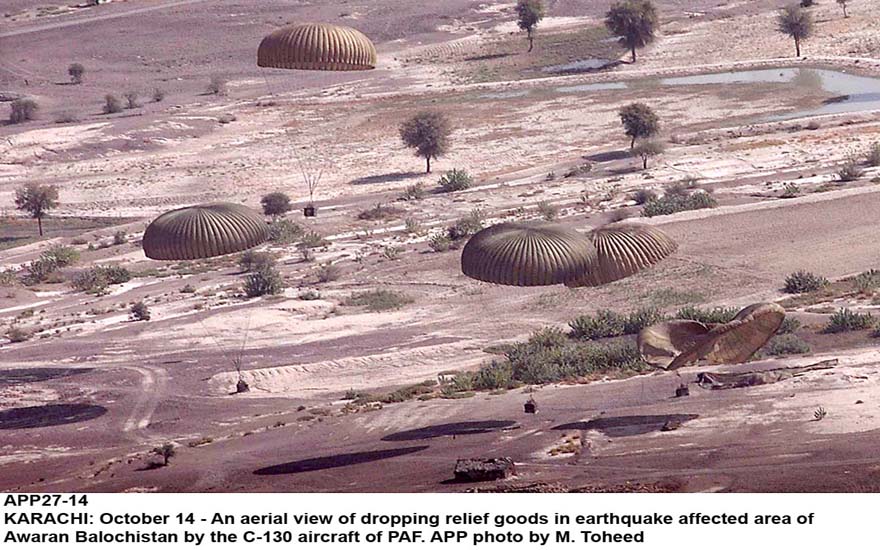 In need of relief: Food and medicine packages being dropped in Awaran.

With the jolts of earthquake, two things came into the limelight for the world to see and ponder. First the extreme poverty of the Baloch and, second, the ongoing low intensity Baloch insurgency. Poverty has always existed in the Baloch hinterlands. It is a chronic affliction of Balochistan, which manifests itself in periodic episodes at times of drought resulting in extremely high rates of mortality and mobility.

In 2002, Nawab Akber Khan, while talking of Balochistan rights, was dealt with brutal force, persecuted and ultimately killed. And this triggered an insurgency, unparalleled in history, whose ramifications can be seen all over Balochistan.

However, at the moment there are reports everyday about roadside mines blasts, rocket fires and targeted shootings at insurgents and vice versa. The government authorities complain that insurgents are creating obstructions in rehabilitation work but the LEAs give press statements that they will continue to carry out humanitarian work despite rocket attacks and firing by miscreants. Further, the insurgent sources say that the LEAs are using the rehabilitation work as a cover, and are actually penetrating deep in the area, establishing new posts and shifting arms and ammunition in the hope of escalating the ongoing operations. They also say that the LEAs are planning to launch a large operation, but the LEAs catagorically deny any such plans. It is apparent that there is a trust deficit and hostile activities are on the rise on both sides. There will be a bloody confrontation and it is evident that the rehabilitation work will suffer.

There are many difficulties in the path of rehabilitation work. The distances, weak infrastructure, scattered population and, above all, the precarious law and order situation are all strong obstacles in the way of rehabilitation work. As far as the disaster management work is concerned, one keeps one’s fingers crossed. Generally speaking, such work in the country has always been far from satisfactory. Beside other factors, pilferage, misappropriation and wastage are common occurrences in such calamities. In fact, disaster management work in Balochistan has never shown any tangible efficiency in its performance in the past, and the results of the present work are yet to be seen.
There is news that the donors from the non-governmental sector, specially foreign donors, are facing difficulty in getting NOCs from the authorities to distribute their donations directly to the people. The government insists on carrying out this task through its own system, be it because of the law and order situation or a policy matter, but the donors feel uneasy.

One must admit that response for help is laudable and donations are generous but due to lack of organisation and coordination, the distribution is sluggish. Soon the harsh winter will strike. The shelters for the victims are not likely to be available any time soon and the helpers will also eventually pack up and leave.
The death toll, it appears, will only rise.