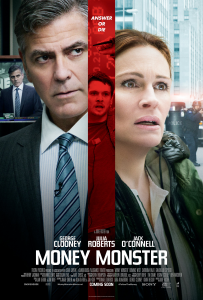 The message of Jodie Foster’s gripping thriller about systemic corruption, ravenous greed and moral bankruptcy will resonate with Pakistani film-goers who are likely to view Money Monster as an indictment of the country’s politicians, bureaucrats and businessman and not as a telling tale of the global financial industry.

Money Monster tells a simple story, more or less in real time. Lee Gates (George Clooney) is the host of the titular show in which he gives financial advice in between vintage film clips, cheesy dance numbers and comedy acts. Gates’ ego matches his popularity; his disrespectful treatment of his crew is a part of his routine. The show is produced by the very capable Patty Fenn (Julia Roberts) who is on the verge of leaving the show, having had enough dealing with Gates and his unmanageable ways. The action begins when a young truck driver named Kyle Budwell (Jack O’Connell), carrying explosives and a gun, breaks onto the set during a live transmission. Budwell, it is revealed, lost all his money on one of Gates’ stock tips and is looking for revenge, an apology and, most importantly, an explanation. He demands that cameras keep rolling as he exacts answers. The network is happy to oblige by getting ready to televise what may end up as a ratings-friendly live execution.

The lean, efficient and engaging Money Monster covers familiar territory. It combines some of the elements of Dog Day Afternoon, Network and The Big Short, but it lacks the vivid characterisations, vibrant energy and irreverent humour of the hostage drama, Dog Day Afternoon. Unlike Network, it fails to make viewers angry about the ratings-obsessed world of television and some of the topics it touches upon. Moreover, it does not have the narrative momentum, insight and wit of last year’s The Big Short. Yet, all its shortcomings notwithstanding, Money Monster delivers, with confidence, clarity and authority, a simple and potent message — the accumulation of wealth by the rich and the powerful is always at the expense of the poor; it is not a part of capitalism but a crime with tragic real-world consequences. The message is tremendously relevant in today’s post-Panama Leaks world and the film’s greatest strength. It gives Money Monster an edge over three superior films with similar themes.

Geroge Clooney’s and Julia Roberts’ pitch-perfect performances are another strength of Money Monster. Clooney and Roberts have terrific chemistry and light up the screen whenever they appear together. Clooney’s self-loathing TV show host has more bluster than acumen. He plays the part with remarkable flair and unshakeable charm. His smile, of course, is more effective here than his histrionic abilities. Roberts, in a woefully underwritten role, is effective, in control and extraordinarily calm as she takes charge of a potentially volatile situation. She peppers what could have been a dull performance with a sense of irony, defiant serenity and imperturbable maturity.

One scene stands out in Money Monster. It takes place when, in a bid to help Budwell recover their losses, Gates appeals to the kindness of viewers and tries to persuade them to buy worthless stock owned by Budwell to help raise its value. Gates’ speech imploring viewers to buy a failed stock for humanitarian reasons is solemn in its sincerity but laced with a selfish desire for survival. It is one that can only be managed by an actor of Clooney’s enormous charm. The subsequent moments, directed flawlessly by Jodie Foster and shot impeccably by Matthew Libatique, represent Money Monster at its best.

The rest of the movie, unfortunately, does not do as well. It loses its way as it moves into an increasingly preposterous second half. It veers between the genres of thriller, drama and satire, but fails to make a mark in any one. Fortunately, it makes the truth about the depredations of the rich and the powerful crystal clear. In their quest to accumulate more money and more power, they lie, they cheat, they commit fraud and then set up smokescreens to hide their misdeeds. The message, delivered in a blunt and straightforward manner, more than anything else, is what makes Money Monster a worthwhile film.