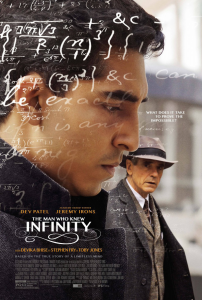 Matthew Brown’s The Man Who Knew Infinity cannot expect viewers to be fascinated by the work of Indian autodidact and mathematician Srinivasa Ramanujan (Dev Patel), who left behind a monumental body of work on the theory of numbers. The film seems reluctant, if not loathe, to describing the significance of the work that continues to be studied and applied almost a century after it was developed. Showing a few neatly written equations and two notebooks as proof of the mathematician’s greatness, is not enough.

The Man Who Knew Infinity is a very conventional and far too predictable biopic of one of the most inspiring men in the world of mathematics.

The film introduces Ramanujan as an intensely poor 25-year-old living away from his wife, Janaki (Devika Bhise), in Madras, India, in 1913. After considerable struggle, he finds a humble job as a clerk in a shipping company. The job allows him to bring his wife and mother, Komalatammal (Arundathi Nag), to Madras and continue with his first love: mathematics. His kind boss, Sir Francis Spring (Stephen Fry), gives him the encouragement he needs to pursue his work and to travel to England to get his work published. Ramanujan writes a letter, with excerpts of his work, to G.H. Hardy (Jeremy Irons) at Trinity College, Cambridge. The professor recognises Ramanujan’s genius and invites him to pursue his studies at the college and get published. Ramanujan travels to England, leaving behind his supportive wife and possessive mother.

Once in Cambridge, he forges a strong bond with Hardy, who encourages him to rigorously prove the formulas he has developed empirically using intuition and, in his own view, divine guidance. The young mathematician braves institutional bigotry, racism, reactionary conservatism, war, illness and much else to eventually gain a fellowship at Trinity College before returning to India, only to die a year later at the age of 32.

Ramanujan’s story has tremendous cinematic potential; it is a veritable goldmine for the study of culture, intellect, intelligence, love, friendship, and religion. Sadly, The Man Who Knew Infinity treats each area in a perfunctory manner. The cultural conflict between East and West, the British subjugation of its colonies, the loving relationship between Ramanujan and his wife and the adversarial relationship between his mother and wife are all given dutiful nods but are never explored. The film spends some time on the relationship between Ramanujan and his mentor, the tug of war between academic substantiation and assertion and the protagonist’s religious beliefs, but fails miserably in treating any of them with insight or understanding.

The performances in The Man Who Knew Infinity are its biggest strength. Jeremy Irons and Dev Patel are at the top of their game but it’s the very talented Toby Jones, as scholar J. E. Littlewood, who delivers the film’s best performance. However, Infinity suffers from many flaws.

Firstly, its treatment of the intensely close but platonic relationship between a gay mentor and his straight protÃ©gÃ© is not honest. In fact, the film does not even mention Hardy’s homosexuality.

Secondly, the film conveniently ignores the fact that Ramanujan’s wife was 10 years old when he married her at the age of 21. The moral, ethical and cultural issues related to marrying a minor cannot be ignored, especially in a film ostensibly respectful of truth and integrity.

The Man Who Knew Infinity’s third major fault is that it ignores a critical fact: the British did not treat their subjects as intellectual equals and were, in fact, intimidated by their brilliance. Not everyone was as lucky as Ramanujan; a lot of brilliant minds were relegated to menial jobs, thanks to the guilt-ridden insecurities of their British rulers. This deserved a mention in a film based on Ramanujan’s life.

In fact, Srinivasa Ramanujan’s remarkable story deserved a better film than The Man Who Knew Infinity, which never attempts to be more than a formulaic biopic.