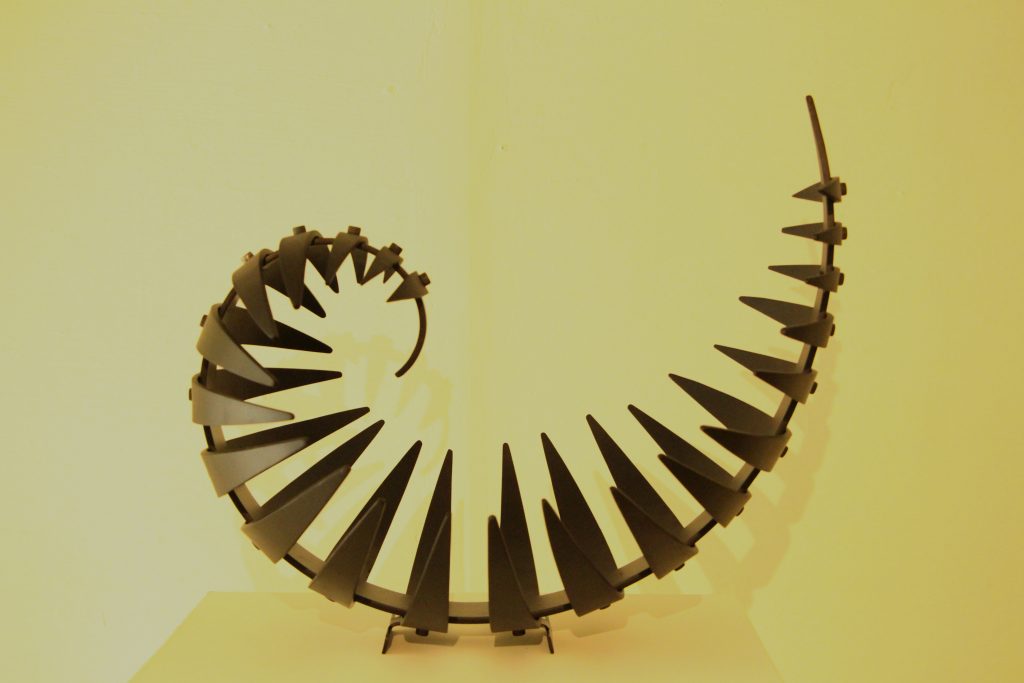 It was refreshing to visit Koel Gallery’s show of sculptural works by Fahim Rao. Nine metal pieces in brass and stainless steel were on display, under the title Shab-o-Roz. The three-dimensional works were of moderate size and beautifully finished. Not only did they engage the eye by their shape and symmetry, but their dynamic visual impact resonated in the imagination as well. The symbolism inherent in their conceptualisation was also highly engaging.

Fahim Rao’s geometrical constructs have a powerful biomorphic quality. The biomorphic shape exists in the whole rather than in the constituent parts. They tease the mind into making association with natural forms, even though there is no formal resemblance to the associative object. The forms are open and airy, and the empty spaces within the solid parts also form a relationship by the interplay of light and shadow. Each sculpture has at least one line of symmetry.

A rounded, wall-mounted brass sculpture is reminiscent of a snail shell or a segmented dome. A black piece sits on a wooden pedestal and has extensions come away from the central spine which curves up at one end. Vertebrae or scorpion? The ambiguity is pleasing, inviting even.

There is a shiny star-burst. Yet another quasi-spinal form curves inwards like a comma or even a fetus. The proportions almost correspond to the curved line within the rectangle of the golden ratio.

There is, however, an underlying unity to the construction of these diverse forms. The pointy edges common to all these 3D sculptures provide a clue, as does the title of the exhibition. Fahim Rao has used the shape of the crescent as his basic building block. By juxtapositioning, overlaying and interlocking the crescent shape, he has created these varieties of forms. 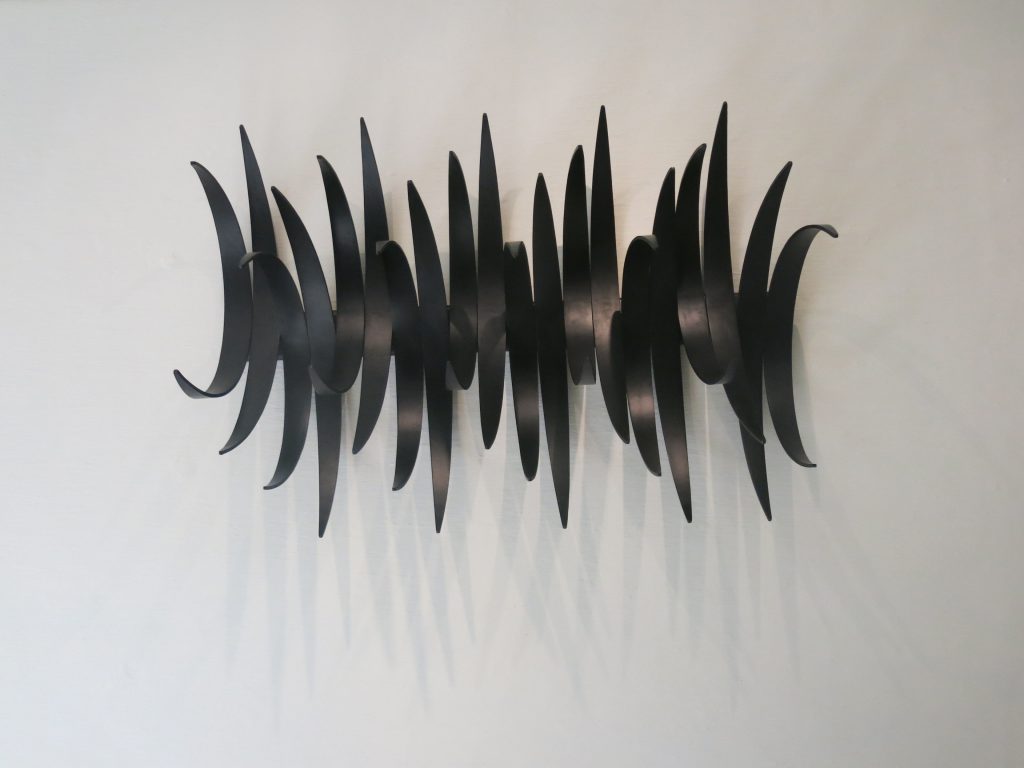 Shab-o-Roz or Night-and-Day becomes integral to the conceptual unity of the work once the building block has been identified. Shab or Night is apparent from the use of the lunar motif. The element of Roz or Day is more subtle. As one views the pieces from different angles, the relationship of the shadows between viewer and object alters. The viewer is cast in the role of the sun — hence Roz — whose movements recalibrate the pattern of light and shade.

The most obvious association of the crescent symbol for Pakistanis is with Islam and its representation on the national flag. This, however, is only the most recent iteration of ancient cosmological practices. The waxing and waning of the moon was used to mark time by the lunar calendar. The crescent also morphed into the horns of the bull in proto-Indo-European culture. The seals from Mohenjo Daro, which show the humped bull or zebu, testify to these ancient links.

In addition to the metal sculptures which are the mainstay of this current show, there is also a fiber glass installation of five crouching figures. This installation is part of an earlier series titled Panchwan Period which was on show at the Koel last year. 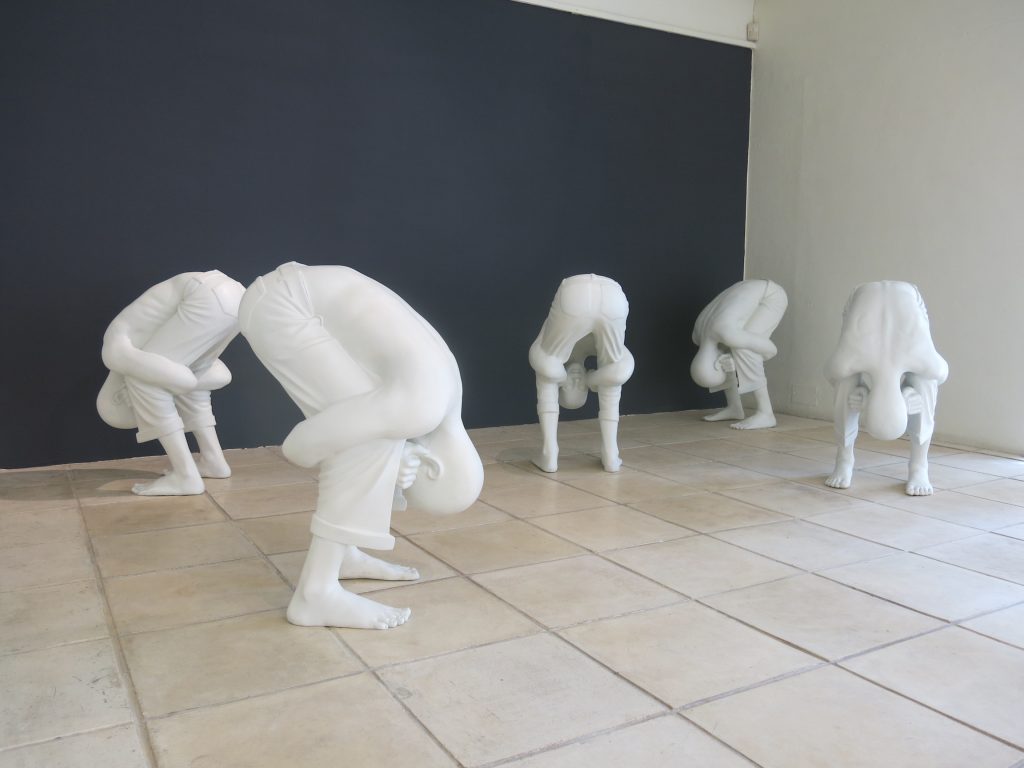 The figures are bent in the punitive “murgha [rooster]” position, a typical punishment meted out to schoolboys. They are colourless, completely white. The detailing on their bodies and trousers is precise. Their beauty belies the imperative to punish that has led to their assuming this humiliating posture.

The installation of these five identical figures — youthful men in trousers and bare-chested — is very different in mood, material and concept from the metallic sculptures in the Shab-o-Roz series. This difference is testament to Rao’s versatility as a sculptor. He has studied Fine Arts at the Central Institute of Arts and Crafts in Karachi. It is hugely exciting to view work of such finesse especially in the domain of sculpture which has been a rather undersubscribed field in the practise of Fine Arts in the country.