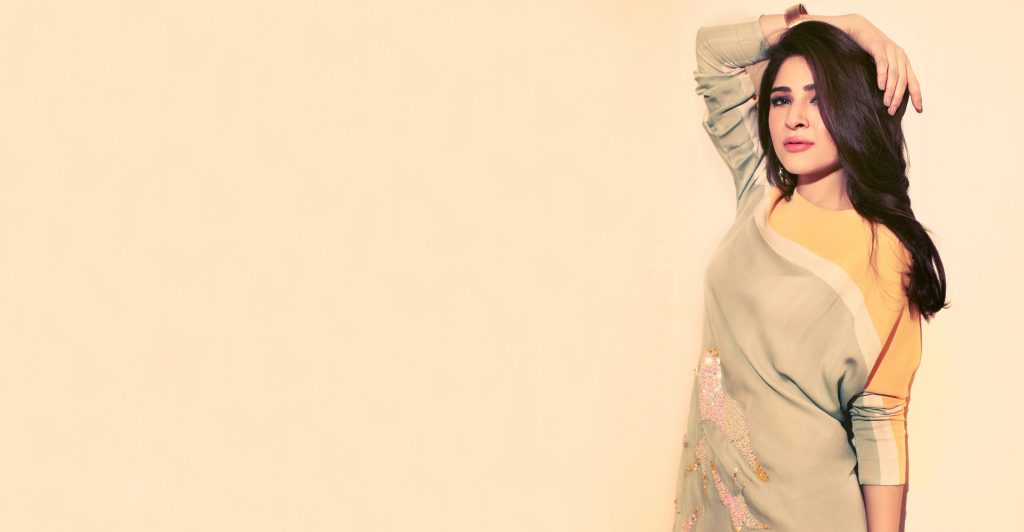 It is that said Ayesha Omar’s approachability and bubbly nature almost precede her. Meanwhile, I was floored by how forthright she is. We met during the shoot of Bulbulay, the show that made Khoobsurat (Ayesha’s character) a household name in Pakistan, and even has a fan following across the border. Considering her larger-than-life presence in the television, film, fashion and music industry — and she paints as well — the petite, matter-of-fact, and surprisingly unintimidating Omar clearly has a will of steel. That perhaps can explain her success. While she maintains she has never planned a day in her life, life obviously has plans for her. And once she has dived into a project, she gives it everything she’s got. So what begins as an adventure, morphs into a full-time commitment.

Clearly high-energy, Omar talks quickly: “December is mad, tonight there’s a gig at [CafÃ©] Flo, then there’s a friend’s wedding tomorrow and then another friend’s the day after,” she says, rolling her eyes, before sitting down with a slice of Xander’s gluten and sugar-free red velvet cake. By the sounds of it, her friends are a big part of her life and heart.

And her family? Omar says her mother has always been her greatest champion. She has a younger brother, who, she proudly announces, is currently completing his PhD. And the well-respected poet Kaleem Omar, was her paternal uncle. So maybe the talent she so obviously has is part of her genetic make-up.

Now Omar is the new face of Maybelline. She smiles, saying, “God has been so kind.” There’s some modesty in that statement. Despite the cosmetic contract and the endless compliments, she does not think she is in any way beautiful. “In this business, people very quickly tell you what your biggest weaknesses are. And I know I don’t mould to any conventional concept of beauty vis a vis the industry. God has given me a functioning body and brain so I am more than grateful for that. I don’t want to change anything, but, of course, I wouldn’t begrudge anyone who does.”

So where does she find the amazing self-confidence she obviously has? “My father died when I was a year-and-a-half, and my mother raised my brother and me single-handedly. I did well in school, I was a good student; I would work hard and also, I would paint. I think I was meant to paint as a profession. Acting was a side thing I did to support my mother. That was my focus.”

I ask her what she plans to do with all the offers she gets from across the border. She is unequivocal: “I owe this country so much, and besides, I couldn’t go to Bollywood when the Pakistani industry needs me.” She feels that after working across the border one’s ambitions and aspirations change somehow, and she just can’t see that for herself — at least, not yet.

We’ve all seen Ayesha the actress, the singer, the model, the cosmetics spokesperson, but what about the self-professed painter within? I ask. She says her mother wanted her to be a journalist, but when she saw her artistic skills, she supported a career in the fine arts for her daughter. That didn’t happen. “And that,” laughs Ayesha, “epitomises my life so well. It’s never taken a straight line. I’ve always gone with the flow, with my instinct, and, Alhumdollilah, that has not steered me too wrong.” However, career aside, paint she still does. Her canvases are larger than life, 6-7 feet. When she starts an art project, she says it can take her weeks or even months to finish. And she has so many projects going on simultaneously, that she feels she cannot do her artwork the justice it deserves. “If I can’t create something I am truly happy with, I will never put it before the public. So right now, until I can give it the time and effort it requires, I have pretty much put painting on hold.”

I wonder, as a single woman, does the career she has adopted pose any specific challenges? Omar says after all the chatter about the Pepe Jeans advert she did with her beau, Sikander Rizvi, and the ‘item-number’ she performed in her film Karachi Se Lahore, and then the heartbreaking Qandeel Baloch murder for a misplaced notion of ‘honour,’ she really began to question how free women in Pakistan actually are to exercise their will in regard to how they live their lives.

Her latest project is the webisodes that she will be releasing on healthy eating. “How can you not care about something that will impact your thoughts, energy, focus, even your disposition?” she maintains. We watch the pilot episode of the show on YouTube together, and she says it is everything she wants it to be.

We talk about marriage. Omar believes the decision to take the plunge should be based entirely on finding someone you cannot live without, someone you love wholeheartedly. “It should not be something you jump into just because that’s what society thinks is the only natural course for a woman’s life.” Omar discloses she faces no pressure from her mother to marry — instead, she says, she is encouraged by her family to go and pursue her Masters. But she acknowledges, she does want to “eventually settle down.”

Also, Omar wants to sing more. She says that is something she wants to take further than Coke Studio. And that, she says, is what brings her real joy. n