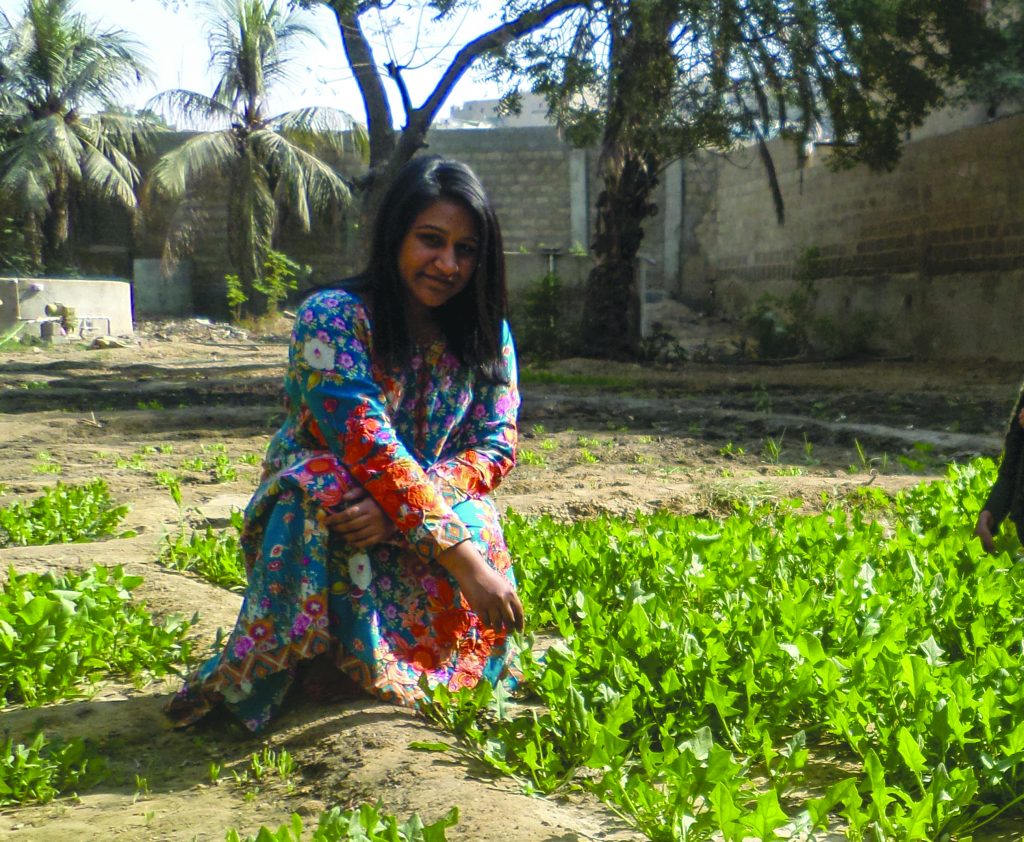 Coming from a close-knit family, Sahar Ismail was always familiar with the work of her maternal aunt, Parveen Rahman — social activist and director of the Orangi Pilot Project Research and Training Institute (OPP-RT), an NGO that began low-cost socially innovative programmes in Orangi’s impoverished settlements in the 1980s. “Khala was in OPP longer than I have been alive, and both she and my mother (Aquila Ismail, current chairperson of OPP) spoke a lot about their work, so I knew its philosophy from the beginning. I lived abroad with my parents between the ages of 13 – 30 and only returned to Karachi a year-and-half ago. But my family would take every opportunity to visit Karachi during the holidays.”

Moving away from her family for higher studies gave her an even clearer perspective on the deep-rooted issues that plagued Pakistan. She took several courses and wrote papers on Pakistan, and graduated with a Masters in Economics from New York’s Syracuse University.

“One of the reasons I chose economics was because eventually I hoped to return to Karachi. The city is embedded in me — it’s home; sure its has its flaws, every country does. But I was never going to live in the US.”

In between her studies in 2008-2010, she got a chance to work on small projects at OPP and learn about the environment. “If I was to work in this sector, it would have to be in Karachi and in OPP. It was a no-brainer, but before I could return with the family, everything went to hell.”

Sahar was referring to Parveen Rahman’s murder on March 13, 2013 — she was gunned down while returning from work at night. Two months later, on May 13, Rahman’s colleague and OPP associate, Abdul Waheed, was killed outside his home. In January 2014, Rahman’s successor, Saleem Alimuddin was targeted with a grenade when he was travelling in a car. Alimuddin miraculously survived the explosion and continues to head OPP. Following the continuing attack on OPP workers, and threats to the family during the Supreme Court hearings of Rahman’s murder case, Sahar and her family waited for the right time to return.

“We don’t feel the threat as much as we did earlier, as the violence in Karachi abated after the Rangers began their clean-up operations. I can see a visible difference between 2008-2010 and now, especially when I started going to OPP since September 2015. The Supreme Court’s decision that even the petitioners of the Parveen Rahman murder case couldn’t withdraw, helped to protect the family and the 70-80 people working in OPP.”

Sahar’s arrival in Karachi remains a blur because she started working in OPP even before she could fully unpack. Following in her famous aunt’s footsteps, she launched new initiatives, and her first one as the Director of Programmes — Environment, Educator and Skill-training, was in collaboration with the Karachi Biennale 2017 — peace-building by bringing art to public spaces. An innovative media art workshop was organised for eighth graders from different schools in Orangi called `Technology for Life,’ in which two German trainers conducted a three-day workshop, teaching children about energy through open source technology and how to apply that knowledge in their personal lives. “You could see what a difference it made to the kids who were from the low-income category.”

Other initiatives included teaching organic farming and coaxing leafy and other vegetables from Orangi’s lifeless earth on the office property, despite brackish water. Sahar is setting up a successful model for recycling water at the head office through a natural filtration process i.e. a bio-sand filter. “We are following OPP’s philosophy to make a low-cost model first, figure out the kinks, and then teach people to do it themselves.”

She has also introduced a Women’s Saving Programme that teaches women to pool their monies and use it to set up small businesses or take loans from it, and a teachers training programme in collaboration with the Oxford University Press for grades one to five that includes lesson-planning and classroom management. “The plan is to conduct such trainings every two months and build the capacity of 500 teachers a year from the 60 government schools and thousands of low cost private ones in Orangi.” Sahar is also following up on art education for teachers — originally an idea of Rahman’s.

In December 2016, a new three-month theoretical Cargo Port Services course was started for intermediate college students, which is designed to train 100 students a year for the next five to 10 years. It is part of five other skill-training programmes, including baking and different types of embroidery. For the courses that require practical training such as those of electricians, plumbers and air conditioning repairmen, the students are placed with skilled professionals and helped with transport costs. “Our hope is that all our skill-trainings turn into livelihood and entrepreneurship programmes.”