By Niilofur Farrukh | In Memoriam | Published 5 years ago 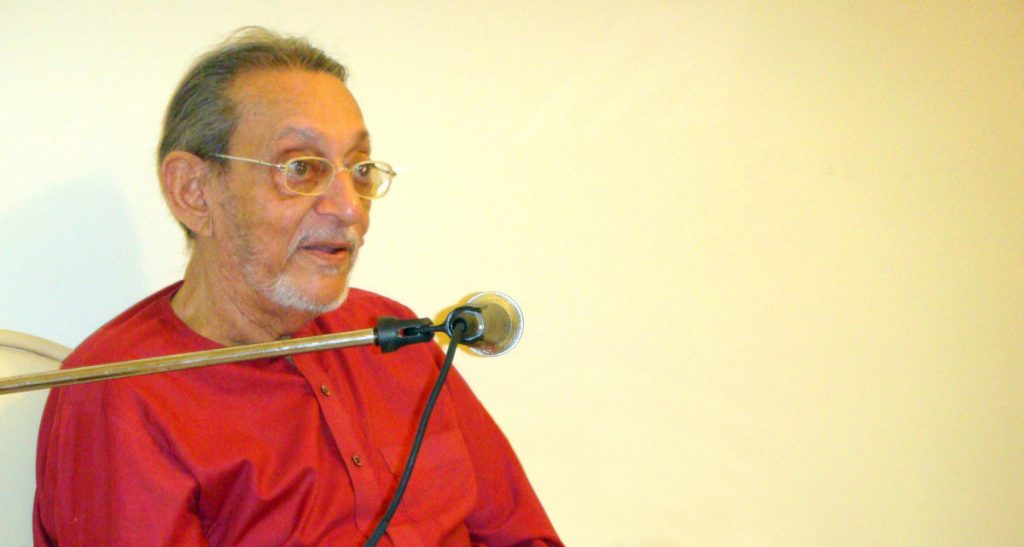 For over four decades, Dr. Naqvi had been a commanding figure on Pakistan’s art scene. A man with a brilliant mind for history and critical thinking, he was someone many admired but very few got the opportunity to dialogue with. With time, the gap between him and his admirers grew wider, so when news of his death reached them, many had the sense of losing him for the second time, for many years ago he had receded into his inner sanctum.

Akbar Naqvi’s critical writings inspired me to write on art in the 1970s, when I was exposed to them as an art student; his dense art speak challenged me to ‘de-code’ the content and soon his articles, which were packed with references, led me to other writers and opened up the world of art criticism to me. It was from people like Dr. Naqvi, Rasheed Araeen and Gayatri Spivak that I learnt that art criticism had to follow an independent cultural compass to end , what Dr. Naqvi called, ‘the one-sided territorialisation of art.’

While Spivak in the US spoke about the ‘epistemic violence’ of the colonisers that destabilised people’s confidence in their intellectual traditions, Araeen with his Third Text in London, struggled to legitimise the discourse from non-western contexts and create space for it in art’s power corridors. Akbar Naqvi, located as he was on home ground, could spearhead the change from among the people who experienced the day-to-day fallout of post-colonialism.

Akbar Naqvi’s book Image and Identity was an art history of Pakistan with cultural continuity at its core that made it a radical departure from what already existed. While the lingua franca of art remained English, his contextual shift complicated the exclusivity of the Eurocentric discourse in art criticism. For Naqvi, Pakistani Modernism could not be delinked from Sufic and literary philosophies. He saw the resonance of Malamati Sufism in the practice of some artists, particularly Sadequain, where belief, intellect, ritual and custom seamlessly fused in art and echoed the syncretic roots of his civilisation.

I still remember the contradictory emotions of respect and anger with which the book was received when it came out in 1998. The artists who read personal remarks in Dr. Naqvi’s critique turned their back on the book. The art critics, who were confronted with a new discursive template, admired the writer’s intellectual breadth but failed to grasp its potential as a seminal text. In his introduction to the second edition of the book, Dr. Naqvi wrote with bitterness of how his book had faced a wall of silence and few people bothered to review it. Frankly, the reason behind this was was more than plain indifference. To review Image and Identity was a big challenge, for it encompassed four disciplines — Urdu literature, English Literature, History and Art Criticism — and very few people had the capacity to do this complex tome justice.

With Dr. Akbar Naqvi’s passing we have lost an important cultural thinker. His evocation of the culture of Al Hind (Indian Subcontinent/South Asia), with its deep-rooted tolerance, is particularly relevant today. He locates art practice within its roshan khayal tradition or enlightenment, that consciously assimilated new ideas and cultural influences for millennia. In his texts he elaborates on rawadari, goodwill between Muslims and Hindus, based on cultural protocols that respected each other’s religious practices, something systematically destroyed by the divide-and-rule policy of the British.

Besides influential scholarship, Dr. Naqvi’s most vital contribution has been a persistent focus on enlightenment and tolerance as the foundation of our civilisation — a timely reminder at a juncture when we need it the most.