Is the resurgent Supreme Court, led by Chief Justice Iftikhar Chaudhry, the greatest threat to democracy in Pakistan? Will the restored justices — in their messianic zeal to establish the writ of the apex court — become tools of the real establishment and take down the elected government?

Some pundits feel the Iftikhar Chaudhry-headed court is exacting vengeance upon the PPP government for its earlier reluctance to restore the judges ousted by Musharraf. They feel the present lot of justices became heavily politicised during the Lawyers’ Movement and have lost all sense of judicial restraint — they believe these restored judges feel no compunction in forming covert alliances with political leaders and other power-brokers — their decisions are dictated, not by law, but by political agendas and populism. Moreover, the mass public support they received after being deposed by Musharraf has led them to the erroneous belief that they represent the people’s will more effectively than elected parliamentarians.

According to this view, the manner in which the Supreme Court has proceeded with the NRO case is a clear example of the bias of the apex judiciary against the elected PPP government and an unwillingness to operate within the constraints of the constitution.

Is this actually so? One needs to examine the court proceedings and orders in the NRO case dispassionately and absent from political rhetoric. Are there radical departures from traditional judicial norms and settled legal and constitutional principles?

It is worth remembering that by the time the challenge to the NRO was heard by the Supreme Court, the Ordinance itself had lapsed. The NRO was originally promulgated as a temporary ordinance by Pervez Musharraf. After November 3, 2007, permanent status was conferred upon the NRO (along with a host of other ordinances promulgated by Musharraf), firstly through the Provisional Constitutional Order (PCO) and subsequently through a constitutional amendment effected by General Musharraf, namely Article 270-AAA.

In the Sindh High Court Bar Association case, the Supreme Court held that Musharraf’s PCO was illegal and that General Musharraf had no power to effect constitutional amendments unilaterally. Thus, both the PCO and Article 270-AAA were held to be of no legal effect. Accordingly, all ordinances purportedly protected by the PCO and Article 270-AAA would require parliamentary ratification before they could effect a permanent change in the law. 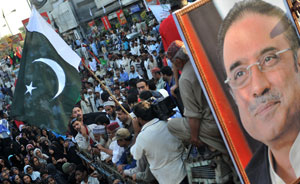 The only question that remained before the Supreme Court, therefore, was whether the initial promulgation of the NRO by General Musharraf had been unconstitutional? Broadly speaking, the NRO provided an amnesty against criminal proceedings to holders of public office between January 1, 1986, to October 12, 1999. Many politicians and bureaucrats had managed to successfully end the criminal proceedings for corruption and other offences against them by using the NRO. If the initial promulgation had been unconstitutional, then any benefits extended to any persons under the NRO would be void ab initio.

Given the massive unpopularity of the NRO, the federal government refused to defend its constitutionality in court. Indeed, the Acting Attorney General, Shah Khawar, filed a written statement on behalf of the Federation stating that the NRO was “promulgated by the previous regime and I am under instructions not to defend it.” Similarly, Kamal Azfar, also appearing for the federal government, filed a written statement saying “the Federation’s view is that those who have benefited under the NRO should be proceeded against under the appropriate laws before the courts having competent jurisdiction.”

Thereafter, the Supreme Court proceeded to hold that the NRO was unconstitutional and void ab initio on the ground, amongst others, that it was discriminatory and violative of Article 25 of the Constitution and was promulgated to provide amnesty to a particular category of persons rather than being aimed at genuine national reconciliation. One of the materials relied upon by the Supreme Court in reaching such a conclusion was Benazir Bhutto’s own description of the manner and the reasons behind the promulgation of the NRO in her book, Reconciliation: Islam, Democracy and the West.

In the circumstances, the Supreme Court proceeded to hold that any criminal proceedings against any person ended or withdrawn by taking benefit of the NRO would stand revived. Similarly, since the letters sent to the Swiss authorities by the former attorney general, Malik Qayyum, withdrawing the requests for legal assistance in respect of proceedings against, inter alia, Asif Ali Zardari were also premised on the NRO and the attorney general had no power to withdraw such requests. The Supreme Court also directed the revival of the original requests to the Swiss authorities.

Seen from a purely legal perspective, the Supreme Court’s judgment in the NRO judgment was unexceptionable. The government’s subsequent protests and applications for review aside, it is a matter of record that the government had itself conceded that all proceedings ended under the NRO should stand revived. Once the judgment had been passed, surely the Supreme Court cannot be faulted for insisting upon its enforcement.

As far as the question of constitutional immunity to President Asif Ali Zardari under Article 248 is concerned, that should have been raised by the government counsels in the NRO case itself. It should have been argued that revival of the Swiss cases — given the office currently held by Asif Ali Zardari — would amount to a continuation of criminal cases against the president of Pakistan in violation of Article 248. At the relevant time, however, the proceedings went undefended for political reasons.

In any event, it is still open for the counsels for the government to press this specific point in an application for review of the NRO judgment. Unfortunately, the present PPP government seems to prefer a course of obstructions and prevarications to pressing the formidable legal point available to them. Rather than trying to gain political mileage through press conferences by alleging bias and victimisation, they would do better to directly argue the matter before the Supreme Court on the touchstone of the Constitution. If, however, the previous approach of the government in the NRO case is any guide, it appears President Zardari and Prime Minister Gilani shall — to their ultimate detriment — continue to allow the course of their legal arguments to be dictated by their political advisors.