Pakistan is home to some of the oldest civilisations known to mankind and, interestingly, the remains of these civilisations dot the river courses. Their rise and fall were inextricably linked to the change in the course of the river. This is true of Moenjodaro and Bhambore in Sindh, and of innumerable sites across the country.

It is unfortunate that we do not have an ‘official’ archaeological map of the country, but history buffs are aware of the cave paintings dating back to 18,000 BC, discovered by Dr Fazal Dad Kakar, present DG Archaeology, in Zhob district. Interestingly, artifacts found in Soan Valley near Rawalpindi predate even these, and evidence of the Paleolithic, Mesolithic and Neolithic periods (old, middle and new stone age) are found in many areas.

This land housed Hindu, Jain, Buddhist, Sikhs and Muslims, and their rich religious and cultural heritage dot the historical landscape. Six of these sites have been recognised for their uniqueness and placed on the World Heritage List of UNESCO. These are Lahore Fort and Shalimar Gardens — taken as one site despite the distance — Moenjodaro, Rohtas Fort, Takht-e-Bahi, Makli necropolis and Taxila, and are consequently on the organisation’s watch list for proper maintenance and management.

But the changing constitutional status poses a great danger to the management and preservation of heritage sites in the country.

After the passage of the 18th Amendment and with the abolition of the Concurrent List, there is likely to be massive confusion over the question of ‘ownership’ and management of the museums and archaeological sites across the country, prior to which the Federal Archaeology Department was managing all the affairs.

Article 70 (4) shows the Federal Legislative List Part I and II, and the Concurrent List. According to this now, museums will be managed by the Federal Archaeology Department, while the surrounding site will be managed by the province. How that will work out, no one knows yet. To cite a case in point, Taxila Museum, as well as the two UNESCO Heritage sites in Taxila Valley will be federally managed. However, control of the rest of the sites in the Taxila Valley will be divided geographically between Punjab and Khyber Pakhtunkhwa, because some of them are on the road beyond the Khanpur dam, which falls in Khyber Pakhtunkhwa. If that isn’t a recipe for confusion, then what is!

The matter of safe and efficient management of our national heritage according to internationally acceptable standards is too important to be left to political machinations. Whatever the new mode of devolution that comes into play after the 18th Amendment, care must be taken that political correctness does not override matters that should transcend these changes. 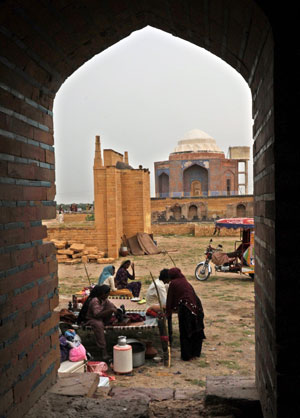 However, proper management is not the only concern: it is also pertinent to establish whether the floods have affected the archaeological heritage of the country in any way.

Even two months after this catastrophe, there has been no assessment of the damage in this sector. In Khyber Pakhtunkhwa, where roads and bridges have been washed away, it is difficult to access archaeological sites high up in the mountains. Some damage is reported to have occurred to the wall of the Rohtas Fort, but since the army has control over it, it carried out the repairs soon after the water level receded.

There was concern about Moenjodaro as well, due to the raging waters of the Indus that came very close to it. Mercifully, the site remained undamaged, though another archaeological site, Amri, in Sindh lies submerged, and the damage will only be assessed after the water recedes. The final damage assessment can only take place once all the places are accessible. As far as the Makli necropolis is concerned, it has been converted into a massive relief camp, and only after the IDPs depart can any kind of assessment be made of the damage, if any, caused to it by the human habitation of the area.

We will only get a clearer picture — and know the extent of the damage — once the UNESCO team, that arrived on October 9, completes its survey and publishes its findings.