The rain may have stopped, but the pain and devastation continues. And they are likely to continue for a long time. This article is one of seven in Newsline‘s special coverage of the ongoing humanitarian crisis brought on by the floods of 2010 and how it is affecting the lives of Pakistan’s most vulnerable citizens, the country’s food supply, the fragile economy and the neglected environment, as well as what Pakistan’s politicians and bureaucrats are doing about it all. More articles will be published over the coming days.

We are victims of the waderas’ actions. If they had not breached the bunds (embankments) to suit themselves, the river would not have compelled us to live like refugees,” says 70-year-old Dildar, a resident of a relief camp in Hyderabad. He squarely lays the blame on waderas (landowners) and politicians for the devastation caused by the floods in Sindh. And it is an ongoing disaster. More waters are inundating villages in the Dadu and Badin districts, largely due to the politicians/landlords directing the flow of water to save their own lands through illegal methods.

The widespread devastation owes in large part to the mysterious breach that was made on August 7 on the right bank of River Indus at Tori Bund. That innundated Kashmore, Kandhkot, Jacobabad, Shikarpur and Dadu districts in Sindh, and the Jafarabad and Naseerabad areas of Balochistan. The huge flood not only washed away scores of villages and standing crops, but left a large number of fatalities and displaced millions of people in their wake.

Several influential landlords/politicians have been accused of diverting the flow of the raging river to save their own lands by making cuts in dykes and embankments. Most of these have been made on the right bank of the Indus. The Federal Minister for Labour and Manpower, Khursheed Ahmed Shah, for example, has been accused of breaching the Tori Bund because he wanted to save his farm and factories rather than making a cut in the dyke at Ali Wahan near Rohri, which could have prevented a great deal of damage in the area.

However, it is also alleged in some quarters that the Tori Bund was breached by army personnel because it was feared that the water would submerge the Sunghi Bund, which would in turn have washed away the Pano Aqil Cantonment, along with many commercial units belonging to the army and other influential landlords of the area. 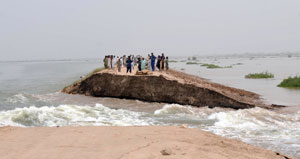 It is interesting to observe that while the waters were rapidly innundating villages in Sindh, and influential politicians were creating diversions of water flows, officials of the irrigation department were conspicuously absent. “We have been drowned by Pir Mazhar and Rafique Jamali who did not allow the MNV drain to be breached at the Karo Mori site because it did not suit them, consequently innundating Khairpur Nathan Shah, a taluka of the Dadu district,” says MPA Imran Zafar Laghari.

In the absence of the irrigation department, locals equipped themselves with whatever weapons they could find in an attempt to resist the machinations of the influential politicians of the area. However, the provincial government refused to take any decision, and in the latest example of the department’s inaction by not breaching the Manchar Lake to divert its water to the river in time, the department caused serious damage to neighbouring villages.

Apart from the breaches and diversions made by the waderas of the area, resulting in the wide-scale devastation, the pressure on the original embankments by the huge flow of water increased due to private embankments in the bed of the river Indus that were constructed by landlords to protect their ketis and farms. Widespread encroachment on forest land by locals, often at the behest of their waderas who wanted to acquire the ‘no-man’s land’ on the river bed, created by years of drought and a narrowing of the flow of the river, and construction of protective bunds by them along the narrowed river bed, became an invitation for disaster. The pressure created by the surge of the river in full throttle was further exacerbated by the private bunds. When these burst, the water flowed out with even greater force, causing massive breaches on the outer embankments. “I managed to save a great deal of land by destroying 63 illegal private embankments constructed in the Thatta district alone, thereby getting the floodwaters to flow into the sea,” said Shuja Junejo, the Sindh secretary irrigation to reporters.

“According to reports, in the initial days of the flood, local landlords resisted the demolition of these illegal bunds. Despite instructions by the chief minister to demolish private dykes in Sakrand taluka, for example, the irrigation department was offered fierce resistance by a local influential landlord who had built a protective bund along his 200-acre banana farm.

The landlords’ construction of illegal dykes and equally unlawful breaching of bunds has been compounded by the irrigation department’s gross mismanagement. 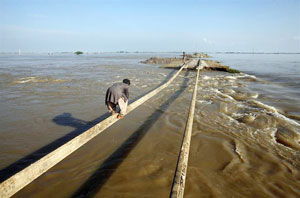 During the super flood in the month of August, the B.S. Feeder was completely closed, while Ghotki Feeder received 7,886 cusecs instead of the expected 10,000 cusecs and the Pat Feeder canals were provided a mere 6,184 cusecs instead of the 14,000 required. Irrigation experts are of the view that more than 80,000 cusecs of water could have been discharged into the Rohri, Nara and Ranto canals. Furthermore, Chotiari reservoir in district Sanghar, which has a capacity of 0.7 million acre feet, is still empty. In the Mirpur Khas division, hundreds of farmers are blocking the highways, demonstrating against the irrigation department and demanding water. Realising the sensitivity of the situation, Minister for Agriculture, Ali Nawaz Shah led a delegation to meet with the chief engineer of the Nara canal in a bid to obtain water for the lands at the tail of the canal. The shortage of water is not only being felt in lower Sindh, but also in upper Sindh where the rice crop direly needs water at present.

The small farmer, who has neither influence nor staying power, is as always, the biggest victim.