Huddled over a makeshift desk in a dimly lit office, the life led by Shah appears a world away from the fabulous luxuries enjoyed by cricket’s corrupt match-fixers. Only the shrill tone of the seven mobile phones at his disposal and his sharp suit give a hint that the 35-year-old’s business is special.

As a bookie working the illegal betting rings, Shah — not his real name — takes home in a year what it would take the average man a lifetime to earn.

We are told that if Mumbai is Mecca then Karachi is Madina for bookies. It is this chaotic setting that the illegal bookies (the ones behind the dodgy bets, rigged matches and endemic corruption that are eating away at the “gentleman’s game”) call home.

For days we had been trying to set up a meeting with one of the illegal bookies in Pakistan’s financial capital. They seemed to have vanished into thin air. We were told most of them fear reprisals following widespread anger at the allegations surrounding the Pakistan Test team. But eventually one, Shah, agreed to be interviewed.

Involved in cricket betting for five years, Shah is deeply embedded in match-fixing. So long as we kept his identity a secret, he was happy to explain how he makes nearly six to eight crore rupees (80 million rupees) a year, tax free. A staggering sum in a region of the world where earnings average between Rs 60,000 — 100,000 rupees per year (around $700 — 1,200 a year).

He lives a playboy’s lifestyle, with a luxurious property and flashy cars. “We rent out different flats around the city since what we do is totally illegal,” says Shah. “I have dozens of people in a room on phones all the time. When people say they will pay up over the phone, it’s as good as a contract. It’s all about trust in our business.”

“The reason I’ve managed to do so well here in Pakistan is because people will bet on anything in cricket. Cricket is the perfect sport, much better than football, because there are so many aspects of a match you can give odds on,” he says.

Last month’s revelation that Pakistan’s bowlers allegedly threw no-balls to order was no shock to Shah (see poll below). He takes bets on no-balls, which opening batsmen will make 50 — and even who will win the toss. Another seemingly rigged bet is when people predict the score after a certain number of overs, or what the final score will be at the end of a game.

Among his regular punters, about 20% already know the outcome when they place their stake. His biggest gamblers, collectively, often wager up to three to four crores on apparently long odds. Shah can read the tell-tale signs of a fix. “The players’ body language is the key sign,” he explains. “Whenever there is a sudden batting collapse or the captain chooses strange field placing, you can assume there is something going on.”

Bookmakers make their money through the unsuspecting betters, who are not privy to insider information and who unwittingly provide a pot for pay-outs to fixers, dishonest players and a cut for the bookies.

So widespread is the desperation in some parts of Karachi that punters place wagers on incidents that take place on the streets. One syndicate insider revealed a recent instance in which a bookie took bets by a cemetery. “He was giving odds on whether the person in the coffin was a male or a female. The gravedigger confirmed the sex of the person he was burying before the bookie paid out. Another time, a guy took bets on the colour of the next motorbike to crash at a busy junction. There are smashes all the time so they were able to see several in a few hours.”

To make so much in such little time, Shah has to be ruthless. He is very matter-of-fact about meting out punishment beatings. “My average bet is probably over two million,” he reveals. “I deal with rich people and also people who haven’t really got much money. “Sometimes I am a gentleman with my clients, sometimes I have to get tough. If people keep coming up with lame excuses I have to use force. I have some big guys who do that work for me and occasionally we even use the police.”

Shah has to pay off the bigger bookies first, for he may need their help to procure loans in order to pay off punters when a rigged bet comes in. Our fixer told us these bookies are ultimately answerable to the notorious Dawood Ibrahim. Thought to be worth billions now, Ibrahim is believed to ultimately control cricket match-fixing.

The Indian-born outlaw, said to be currently living in Karachi, allegedly made most of his money through drug-trafficking and extortion. His daughter Mahrukh is married to Junaid Miandad, son of Pakistan’s legendary former cricket captain Javed Miandad, although there is no suggestion that either of them have been involved in any illegal activity.

The network of illegal betting syndicates stretches from Pakistan and India to London and Johannesburg, says Shah. He claims politicians are involved in match-fixing and that local police take bribes from bookies. 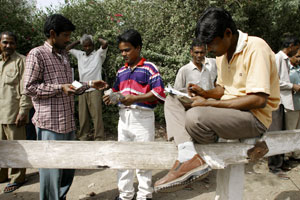 Shah was not shocked by what allegedly happened at Lords. He adds: “If Mazhar Majeed (the sports agent under investigation for match-fixing) is guilty, he is just small fry. The rumour is that he has been hung out to dry by one of the big syndicates that operate here and in India. The big fish are never caught.”

“No one bets on league matches in Pakistan,” he says. “It’s always the internationals.” Shah claims that teams have even thrown away a series of matches after players were tempted by backhanders. “One team was supposed to lose three matches and it did,” Shah claims with pride. “There will always be players tempted by the money.”

With that, Shah’s phone rings again and he gets up and leaves the table to take another wager from a mysterious punter.

Before he disappears, there’s just enough time to ask him if he’s scared of jail. He scoffs at the query. “The courts would probably just hold me overnight. I’d pay bail, then be freed.”

Vote in the poll: