The rain may have stopped, but the pain and devastation continues. And they are likely to continue for a long time. This article is one of seven in Newsline‘s special coverage of the ongoing humanitarian crisis and how it is affecting the lives of Pakistan’s most vulnerable citizens, the country’s food supply, the fragile economy and the neglected environment, as well as what Pakistan’s politicians and bureaucrats are doing about it all. More articles will be published over the coming days.

The raging floods in Sindh continue to wreak havoc, sweeping away everything in their wake. Besides displacing eight million people, wiping out a standing crop on hundreds of thousands of acres and seriously damaging the economy, the deluge in the province has also had a hugely deleterious effect on the livestock sector.

Officials in the provincial livestock department estimate that the livestock sector has, to date, suffered losses of five to six billion rupees — and counting — and hundreds of thousands of people associated with the sector have lost their jobs.

At least 19 districts in the province — which had a majority of the province’s livestock — have been submerged. Livestock officials reveal the total livestock population in Sindh was about 35 million before the floods hit. They calculate that given the pattern of the floodwater’s spread in the province, a huge number of the cattle heads have perished and 25% of the surviving livestock has been hit by a variety of diseases and is also facing an acute shortage of fodder. What does remain of the latter is mostly wet, rotting and full of fungus.

“It is estimated that millions of surviving animals are now facing severe food shortages,” says an additional secretary in the provincial livestock department, requesting anonymity. “Additionally, there is a severely reduced availability of clean drinking water, and the emergence of disease and shortage of veterinary medicines, coupled with the fact that there is no plan or system devised by the provincial livestock department to monitor their health, poses a serious threat to the surviving animals,” he adds.

Echoing these sentiments, a veterinarian in Thatta district, Abdul Ghani Goraho, said, “The cattle that did not drown are now battling several diseases.” So far he has administered over 4,300 anti-virus vaccinations to the buffaloes, cows, goats and sheep in Thatta district at a veterinary medical camp set up by an NGO near Makli hills. 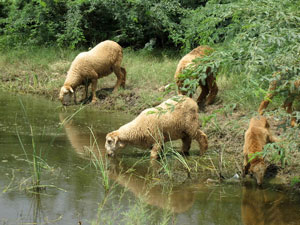 The medicines notwithstanding, cattle owners are complaining of several diseases, including an outbreak of malaria among their livestock, and there is a growing fear among them of an outbreak of assorted epidemics.

The General Secretary of the Pakistan Veterinary Medical Association (PBMA) adds to the fears. He maintains that the outbreak of foot-and-mouth disease among the flood-hit cattle cannot be ruled out. “If concerted efforts are not taken for protection of the affected livestock’s health, the outbreak of this disease is almost inevitable and could cause 100% mortality among those affected.”

Lending credence to these ominous predictions are the statistics. The department’s latest assessments indicate that 264,000 cattle heads have perished and 4,736,000 hit by disease. The fate of many more is yet to be known. Senior officials in the livestock department contend that the mortality figures will inevitably rise dramatically, once the livestock mortality survey results from other districts come in.

Livestock makes up about half of Sindh’s agricultural gross provincial production, and for the rural farming communities, livestock is standby cash. As David Doolan, a senior Food and Agriculture Organization officer, put it, “In good times, people build up their herds and in bad times they sell livestock to generate cash.” Of course, it is not only a source of livelihood for nearly half the rural population, but also a source of protein for millions in the province. 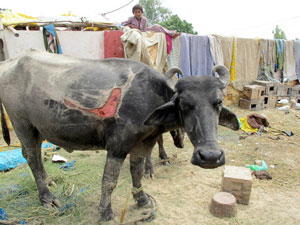 Prices have not been the only casualty. Rumours of butchers settling meat from the carcasses of dead cattle that litter the interior’s flood-ravaged area, have resulted in a reluctance in many quarters to buy or consume meat.

Against this backdrop, recovery will inevitably prove an uphill and long-drawn-out task for the meat industry.

This was originally published under the title of “Meatless Days” in the October issue of Newsline.