From diapers to the Taliban and synchronised wedding dances to gym workouts, there wasn’t much real-life terrain that Sami Shah didn’t cover to ensure his unfamiliar audience was in fits of laughter.

But it didn’t start out that way.

It was a Sunday, the last day of the three-day event, and the hall was rather full. At first, the comedian started off on a shaky footing. Perhaps, Shah was still settling in for his first series of performances in the city, and perhaps he was trying to get a feel for the crowd — which on this night was full of students and young professionals.

Some of the best moments in stand-up come from the extempore humour that stems from interacting with the audience, and after the first 20 minutes, Shah seemed to be in his element.

Which is why this attendee was a little confused when reading a review published in a local daily in which the writer described Shah’s “Seriously Funny” routine — which was indeed ripe with bathroom humour and kinky jokes — as “cringe-worthy” and “geeky wit.” Interestingly, the writer also went on to impart her wisdom on the comedian, suggesting that Lahoris needed “Action. Music. Dancing” to be enthralled. Um, as far as I know, stand-up comedy isn’t a Broadway show, or a Bollywood movie. The best stand-up routines revolve around sex jokes and bathroom humour.

Stand-up comedy isn’t for prudes. It’s meant to be in-your-face humour, which is, let’s face it, vulgar. But that’s what makes it so immensely popular with audiences. Few people want sterile humour. People respond to the freedom of many brave comedians and often the high shock value of their jokes and “observations.”

Months ago, in January, I attended a well-known stand-up comedian’s show in New York City. Russell Peters’ sold-out show at Radio City Music Hall was a colossal hit with desi and foreign audiences that night. It is unsurprising that Shah’s routine was replete with vulgar, yet immensely funny, jokes. Like Peters, Shah delivers a routine that consists of intelligent and bizarre humour that is interspersed with cheeky vulgarity. So what? It sells. And it sure as hell is funny.

As such, Shah’s not-so smooth beginning may have been impossible to miss, but it seems as though people won’t remember him just for that. Many in the crowd thought he eased into his routine halfway through. Others compared Shah to Saad Haroon, a well-liked comedian who was also in Lahore earlier in 2010 for a stand-up show.

Shah’s late-September show at Ali Auditorium was presented by Pakistan Today and Origami.  Shah’s act followed a performance by the band Laal and its brand of political rock. Not everyone was enamoured with the opening act with its serious socialist messages. And it is not hard to understand why: Laal seems like an odd choice to warm up an audience for an evening of silliness and irreverence. Though, for this critic, watching Taimur Rahman on stage with the rest of his band members, stomping his feet to “Utho Meri Duniya” was a treat. The song was upbeat, while its undercurrent, rather moving.

But more importantly, seeing Laal and Sami Shah collaborate was Rs 350 well spent: proceeds from the fundraising shows were promised to go towards flood relief. 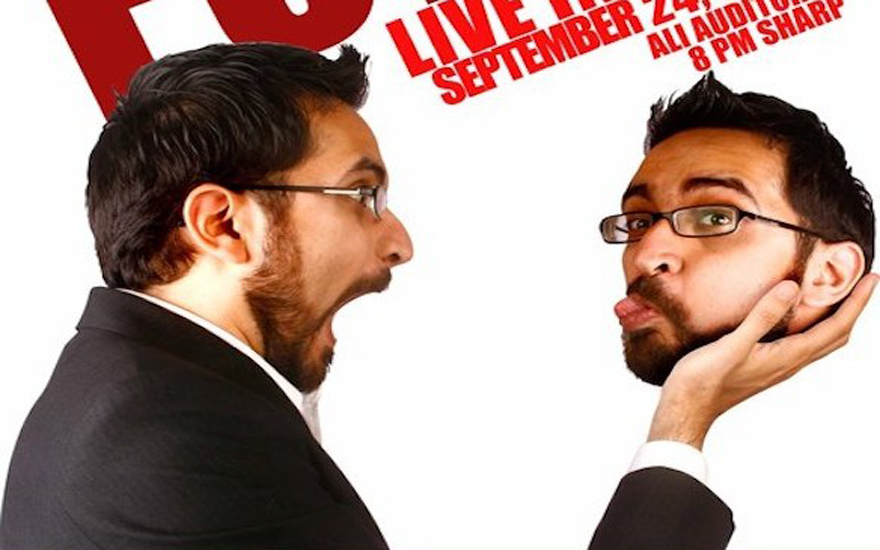