Poppy Seed from its very inception has been trying to devise shows with innovative and scholarly approaches to art, and its practice of holding literary readings and talks in tandem with its art exhibitions is very much in keeping with this stance. The gallery’s current show, ‘Framing the Local Context,’ directly references these sessions as sources for visual metaphors voicing notions of the here and now.

Based on a series of readings held from February to May 2010, the exhibition evolved out of a conscious examination of literary and cultural traditions to discover and build original forms/imagery, as opposed to borrowing and improvising western constructs. Curator Sumbul Khan persuaded artists Danish Raza, Syed Faraz Ali, Salman Hassan and Hajra Haider to come on board as participants, and senior artist Mehr Afroz, who has always derived inspiration from the vernacular and the indigenous, agreed to mentor the complex act of interpreting and translating literary text into visual imagery. Art critic Amra Ali also sat through most of the lectures. Assimilated thoughts were given practical implementation during the summer break and ‘Framing the Local Context’ came forth as a composite show espousing personalised expressions of art that speak of today, but in the light of the artists individual understandings of those readings.

Having read Tilism-i-Hoshruba in his childhood, Danish Raza found resonance in Asif Farrukhi’s lectures, particularly his description of ‘mussawir jadugar’ and the power of the artist to change the reality around him. Rather than opt for ‘good magic’ which he feels may not be able to counter the adversities hitting us, his turbulent paintings imagine an ‘evil mussawir jadugar’ wreaking havoc to portray the chaos and destruction surrounding us. Raza’s embrace of the fantasy epic character sits well with his surreal art leanings. Positioned somewhere between a graphic artist and a miniature painter, he has brought new meaning to his penchant for embossed pattern and metallic paint. While the menacing waters in the ‘Great Serpent of Sorrow’ spell the devastating floods and the reality of ‘Killing Targets’ hits right at the heart of Karachi, it is the intricate ‘Garden of Death’ prayer rug (simulation) which draws you in. Bordered with a minute edging of mosque domes and minarets on one side and dripping droplets on the other and an explosive rehash of oriental design in between, the work, prosaic at first glance, is quite a twister. But it is in ‘Mother of Lies’ that the artist moves away from tentative modulations to give a free rein to his flair for fantasy to craft a fictional monstrosity. As an artist, Danish Raza has responded intelligently to this exercise of accessing graphical and painterly descriptions from cultural and literary sources. 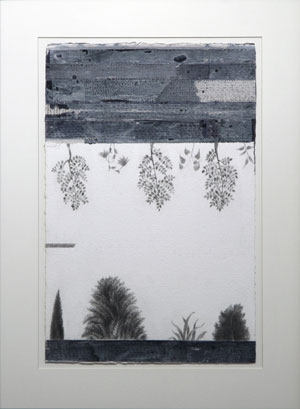 Veteran Mehr Afroz’s Gulistan Hamara series is a sombre but potent take on the cliched concept of paradise as a garden. Drawing inspiration from the pictorial imagery found in Urdu and Persian poetry, particularly compilations like Gulistan (Rose Garden) or Bostaan of Saadi, she has inverted the pleasurable sentiments of natural splendour by intersecting the frames with images of missiles and warheads and pain-inflicting agents such as thorns and nails. This inversion is common fare in today’s terrorist-induced art, but it is Afroz’s adroit manipulation of the symbols and use of the paradise garden as it appears in literature, miniature and architecture that makes the works a well-articulated series. Technically, Afroz’s choice of motifs, style of page-making, the element of stitch craft and the drawn images reference the ancient craft and art of album-making and theoretically she plays with the positive and destructive sensibilities the ‘garden’ concept can generate in people. In ‘Sabz Bagh Dikhana’ she critiques the clerics for prompting suicide bombings with false promises of paradise. 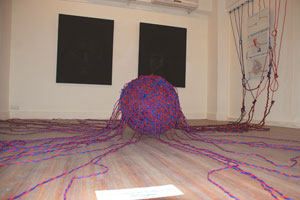 “Living in four centuries at the same time,” a point made by Dr Wahab Suri, struck a chord, with Hajra Haider. But her outsized installation — a ball of rope threaded in red and blue — was a somewhat unresolved attempt to describe this possibility. Syed Faraz Ali’s attention was drawn to the role of common people in our lives during the lectures, which resulted in portrait paintings of the support staff at his work place. But they were not very exciting — one expects more from this artist. Photographic prints translating a verse of Faiz Ahmed Faiz, by Salman Hassan, needed extended engagement to be understood in context.

The Poppy Seed endeavour points out that studying, owning and evaluating home-grown ideologies as points of artistic references is a direction that needs to be pursued with serious intent and purpose if we desire to bring authenticity to our art. Kudos to the curator for envisaging and implementing this programme.