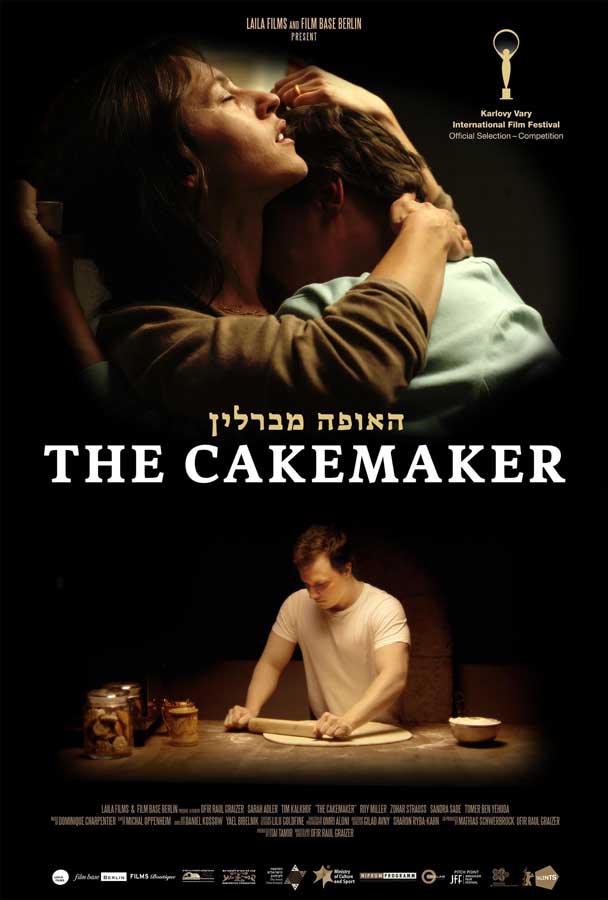 Anat (Sarah Adler) runs a cafÃ© in Jerusalem. Thomas (Tim Kalkhof) owns and operates a small bakery in Berlin. Oren (Roy Miller) is an Israeli engineer who lives in Jerusalem, but travels frequently to Berlin for business. Anat and Thomas both love Oren. Oren enjoys a happy marriage with Anat in Jerusalem and a steamy gay relationship with Thomas in Berlin. He also manages to keep his two lives separate, but the neat arrangement falls apart when he dies in an accident and his lover and wife come together, looking to deal with the loss in their own individual ways, and getting close to each other in ways that neither of them had imagined.

This very unusual love story unfolds in writer-director Ofir Raul Grazier’s outstanding debut feature film, The Cakemaker, primarily because he eschews passion for feelings, and tells the story with intelligence, elegance and restraint. He treats the film’s viewers as adults, letting them interpret the story in their own way, without imposing any readings of his own. The dispassionate, non-judgemental style allows for an intelligent exploration of the many themes — deception, infidelity, duplicity, sexual fluidity, grief and loneliness — of the film, leaving plenty of room for differing opinions and individual interpretations of the twists and turns of the film’s well-constructed storyline and the emotional, moral and ethical behaviour of its characters.

The Cakemaker is based on the real-life story of a friend of Grazier’s who was married and had three children. “He was having affairs with men, and nobody knew about it,” recalls Grazier, according to The Jerusalem Post. “[His wife] didn’t find out about it until he died, and I got the idea to make a film about this. I thought about this woman, she has to mourn, but you can’t really mourn if you have to be angry at the same time. I thought of the perspective of the lover, too. He has a different kind of grief. I thought, I’ll put them in the kitchen together and see what happens.”

And it is in the contrast between the mourning of the wife and lover that The Cakemaker finds its emotional and intellectual heft. Anat is sad and angry, looking for answers, trying to make sense of the life she has led. Thomas is sad and lonely, looking for love, trying to retain a connection to his dead lover. Their specific — and very different — strains of grief bring the two characters together and makes each one a part of the life of the other. That the film finds a plausible, gratifying and heartwarming resolution to their relationship is a triumph of great storytelling.

The Cakemaker’s greatest strength — and the film has many — is its powerful characterisation. Grazier has carefully drawn characters that are nuanced, complex and detailed; a lot is, nevertheless, left to the imagination and intelligence of the audience. The backstories are specific but sketchy; not everything is said and told; motives and goals are murky; and characters are allowed to keep secrets from viewers.

The writer’s reticence adds both mystery and authenticity to the characters that are richly realised on screen by a set of actors on the top of their game. Kalkhof and Adler, in particular, turn in pitch-perfect performances, revealing everything that the audience needs to know about the characters of Thomas and Anat, but not anything that would take away from the enigmatic aura of the two characters.

They struggle to understand themselves and each other, their own feelings and emotions, and, more than anything else, their needs and desires. Their fears and foibles are but human and make them real, believable and, if you will, likable characters. Thomas’ lies and omissions, as well as Anat’s selfish willingness to shun suspicions that are clearly warranted, are likely to endear the two to viewers instead of alienating them, such being the power of their tender, heartwarming performances.

The story of The Cakemaker unfolds in the cities of Berlin and Jerusalem. Cinematographer Omri Aloni captures both cities with great specificity, creating a sense of time and place that is truly remarkable. Different lens and cameras — an Amira in Berlin and a Sony F7 in Jerusalem — were used to shoot the two cities to accurately capture and contrast their cultural texture and mood.

The colour palette of The Cakemaker not only enhances the mood of the film but also supports its plot and storyline. “I wanted to create through colours and other recourses a shift in the point of view of the film,” says Grazier, in an interview with Variety. “To start it with kind of romantic colours, or even those of fantasy as it turns on the protagonist and the love story. Then to make a strong cut when the film gets to Jerusalem. There it’s rough, cold, grainy. Then when Jerusalem starts to become part of Thomas’ life and reality is changing for Oren’s widow Anat, it becomes warmer, more colourful, more vibrant, though some of the roughness remains.”

Aloni uses the old-fashioned and very charming device of the zoom very effectively.  The camera zooms in frequently on the faces of the principal characters, revealing, thanks to the histrionic abilities of the actors, much more than dialogues ever could.

The film has won scores of awards all over the world and been recognised not just for the story at its centre but also for the areas — contemporary Israeli-German relationships, friction between religious and non-religious Jews, the treatment of gentiles in Israel, divisions created by sexual, religious and national identities, life in a country defined by religion, and many others — that it explores. According to the LGBT newsletter, The Washington Blade, Grazier says that the film is “about food and love and lust.” He is wrong. There is much more to it. The Cakemaker is a powerful film about love, loss and mourning, made by one of the most promising filmmakers of his generation.