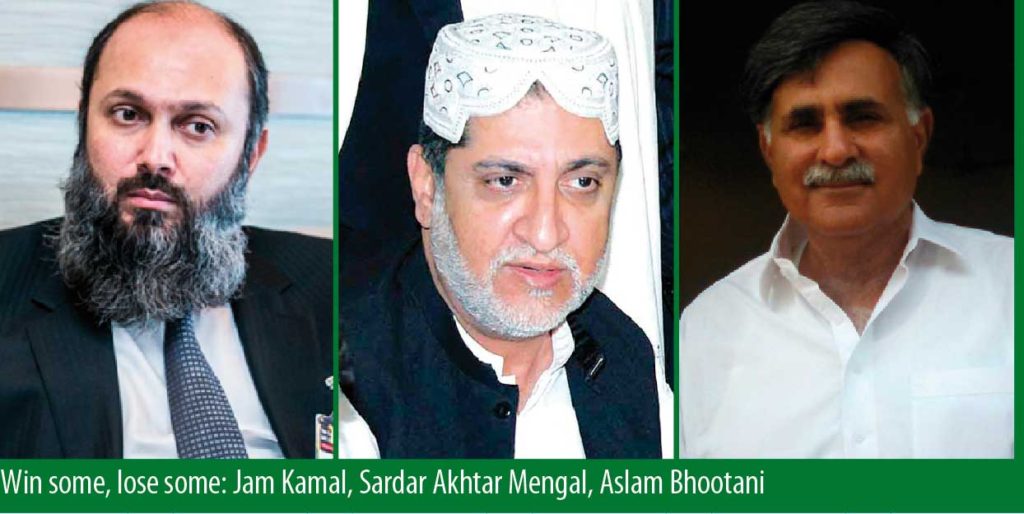 On July 25, the people of Balochistan went to the polls to elect their representatives to the national and provincial assemblies for the next five years. The polling concluded at 6pm, but it took the Election Commission of Pakistan (ECP) 64 hours to release all the election results from Balochistan. The results revealed some unexpected victories and defeats.

The first major upset was the defeat of Jam Kamal, President of the Balochistan Awami Party (BAP), and Sardar Akhtar Mengal, a former Chief Minister of Balochistan and President of the Balochistan National Party (BNP), at the hands of Aslam Bhootani from NA-272 (Lasbela-Gwadar). However, both Kamal and Mengal won their provincial assembly seats PB 50 and PB 40, respectively. Kamal is the leading contender for the post of Balochistan Chief Minister. Mengal is also in the race for the chief ministership of the province.

Aslam Bhootani, on the other hand, has served as speaker of the Balochistan Assembly, and as a political leader he was ranked far below Kamal and Mengal. Yet he managed to bag the NA-272 seat. Analysts believe that he won due to his firm stance on the rights of Balochistan in the China-Pakistan Economic Corridor (CPEC). In his political rallies, he would say, “No truck will pass from Gwadar to Kashghar, if CPEC does not give the people of Gwadar their rights.” Bhootani’s rhetoric paid off and he emerged as the representative of Gwadar in the National Assembly.

The second major upset was the defeat of Pakhtunkhwa Milli Awami Party (PMAP) Chairman, Mahmood Khan Achakzai, from NA-265 (Quetta). Achakzai lost to his junior, Qasim Khan Suri of the Pakistan Tehreek-i-Insaf (PTI). Achakzai had developed the stature of a national leader in the last assembly and was expected to retain his seat from NA-265. However, Achakzai not only lost, but ended up in the third position.

Achakzai claims that his mandate was snatched away from him as the elections were rigged. He has joined the anti-rigging bandwagon led by Maulana Fazlur Rehman. However, the ground reality is that NA-265 has an urban population, with whom the PTI was very popular. Secondly, the PMAP’s role in the last government has made all its party leaders, including Achakzai, very unpopular. There is not much substance in the rigging claims made by him regarding NA-265. 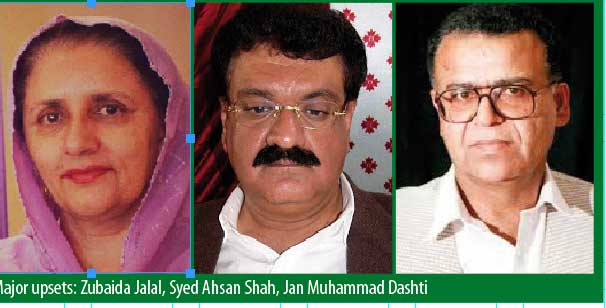 The third major upset was observed in NA-271 (Kech), where Zubaida Jalal of the BAP emerged victorious. Jalal had served as federal minister from 1999 to 2007. She had remained politically inactive since then, and it was only recently that she announced her decision to contest from NA-271. She was facing Syed Ahsan Shah of BNP-Awami and Jan Muhammad Dashti of BNP-Mengal. Syed Ahsan Shah was expected to win. However, the results shocked everyone. She is the only woman to have won a general seat from Balochistan. However, her victory is being disputed. Opponents of Jalal allege that the government machinery was used to facilitate her win.

Another surprise was the result of PB-10 (Dera Bugti). Sarfaraz Bugti, the outspoken voice on security issues in Balochistan, lost this seat to newcomer Gohram Bugti. Sarfaraz was considered to be a favourite of the establishment and was expected to win. However, the election results proved otherwise. Gohram Bugti, grandson of the late Nawab Akbar Bugti, won owing to his family background. Ostensibly the elections in PB-10 were transparent this time round. Sarfaraz Bugti and his eloquent defence of the country’s security policies as home minister will be missed in certain quarters.

The result of PB-09 (Kohlu), the epicentre of the ongoing Baloch insurgency, was also unexpected. In 2013, Changez Marri, the eldest son of the late Nawab Khair Bux Marri, had won. This time round, too, he was being seen as a winning candidate due to his closeness to the establishment. However, just after the close of polls, Marri announced a boycott of the elections, giving rise to the rumours that something had gone terribly wrong. Naseebullah Marri from the PTI, a lesser known politician, defeated the current chieftain of the Marri tribe. 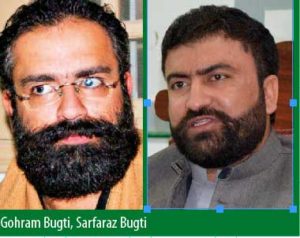 Journalists and civil society activists in Kohlu said that Changez Marri was not a people’s person and spent most of his time in Karachi. He hardly ever visited Kohlu and voters of his constituency could rarely get to meet him. Even in this election, he just sat at home and did not bother to campaign. Being the head of the Marri tribe, he was overconfident of his victory. The results, however, have almost ended his political career.

Although the electables dominated the elections in Balochistan this time, not all of them could win. Four evergreen electables, who always managed to win their seats, lost. They include Jaffar Khan Mandokhel (PB-2), Sardar Dur Muhammad Nasar (PB-5), Sardar Aslam Bizenjo (PB-39), and Mujib Ur Rehman Muhammad Hassani (PB-41). All of these defeats were totally unexpected.