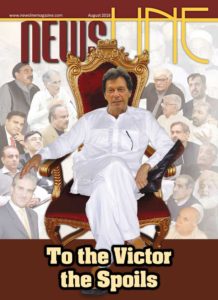 Uneasy lies the head that wears the crown. Imran Khan has finally made it to the coveted throne, after a
22-year struggle, but his first stint as Prime Minister will be far from a cakewalk. He faces a formidable opposition, led by PML-N, PPP and MMA stalwarts, who are reeling from their defeat in what they call a ‘rigged’ election,
engineered by the establishment and the ‘khalai makhlooq.’ They are threatening to take on their nemesis, both inside and outside parliament — and give him a taste of his own medicine. The PML-N, in particular, has not forgotten the captain’s many dharnas.

The captain, meanwhile, in a desperate bid to boost his slim majority at the centre and race ahead of the PML-N in the Punjab — where the latter led by a few seats — was forced to take on board all shades of politicians and political parties.

But juggling the ‘electables,’ plus assorted parties, plus the independents, with some of his own disgruntled team members, is proving to be an onerous task. All want to extract their own pound of flesh in return for their support to the PTI.

The MQM-P, that was at one point anathema to the PTI chief, is also on board — but at a price. And neither of them is happy at what is being seen as a ‘forced marriage’ of sorts. Imran is learning the hazards of being in the driving seat — the hard way.

His party cut a sorry figure as two weeks after the elections, it had still failed to name its cabinet members in the centre, Punjab, and even Khyber Pakhthunkhwa, where it enjoys a clear majority. Stories of scrambles and squabbles within the PTI ranks over the top slots were rampant.

The party cannot afford to lose any more time. It has to move fast and get down to the business of governance. The country is faced with insurmountable problems. The economy is in shambles; some parts of the country are facing 16 to 18 hours of load-shedding and some have gone without water for months. There is a long list of to-dos.

And what’s more, terrorism has reared its ugly head once again. Post-election, more than a dozen schools in Diamer district in Gilgit-Baltistan and one in Balochistan were vandalised and burnt.

Any attempt to destabilise the next government at this critical juncture would have devastating effects for the country. The Grand Opposition Alliance (GOA) needs to step back and rethink its decision to “give PTI a tough time.” The country cannot afford it. Instead of settling scores, it needs to settle down to the gigantic task of putting the country back on track and move forward on all the reforms — above all, judicial and electoral reforms — they keep talking about. ‘Parliament ko izzat do’ should be GOA’s new slogan. Given the poor attendance record of the last prime minister — and the incoming prime minister — in the last National Assembly, this is essential.

As Pakistan celebrates its 71st birthday on August 14, all Pakistanis harbour the hope, as always, that it will spell the beginning of a better Pakistan, a happier Pakistan — the Pakistan of their dreams.

Given the country’s fractured polity, will Imran Khan be able to fulfil his promise of a ‘Naya Pakistan’?