For many years, political analysts and think tanks have been discussing in depth a phenomenon perhaps unique to Pakistan — the military-mullah alliance. To this equation, one more ‘m’ now needs to be added — i.e. the media (or a significant section of it). It completes the axis that is exercising an undue influence in Pakistan. It has become a willing ally of the power-hungry mullah and the military.

A lot has already been written about the complicity of much of the Urdu language media in inciting the killing of the Punjab governor, Salmaan Taseer. In fact, in recent years many private channels have turned into virtual electronic pulpits. The opinion of the bearded ones is sought on every issue, relevant or not to religion. Some of the private channels have gone to the extent of offering a platform for the justification of murder. Just as mixing religion with politics has turned out to be a deadly cocktail, the media’s promotion of religiosity has led to the spread of bigotry and intolerance.

The first instance of incitement to murder was probably during Amir Liaqat’s programme on Geo TV, Alim Online, in September 2008. When somebody asked a question about the fate of those denying the finality of prophethood, one of the participants advocated murder. The host went a step further by insulting the founder of the Ahmaddiya movement. Within the month, three Ahmadis had been killed in three different cities of Sindh.

If the private channels had done a bit of soul-searching at the time, the trend towards the promotion of extremist points of view may have been somewhat checked. But the belief that they are giving audiences the kind of programming they demand, has prevented any steps towards reform. It is exactly the kind of arguments used by Pakistani filmmakers in the past to justify incredible plots, violence and an overdose of song and dance. The realisation hasn’t sunk in that it is a vicious circle of getting audiences hooked on religion and then giving them even stronger doses.

In the case of Salmaan Taseer, the mullah-media campaign started shortly after his visit to Aasiya Bibi in prison in early December and his declaration that the laws relating to blasphemy need to be amended. On December 5, Nawa-e-Waqt editorially accused him of blasphemy and, during the same period, Meher Bokhari on Samaa TV allowed a participant in a discussion programme to proclaim that the killing of Taseer and Sherry Rehman (who has worked on a bill for reforming the laws) was justified. This is exactly what many mosques across the country were advocating at the time. It is this nexus of bigotry between the media and the mullah that ultimately led to the tragedy on January 4, when Taseer’s young guard shot him in cold blood.

However, neither the media nor the mullah campaign ended with the assassination of the Punjab governor. While the mullahs have been out on the streets glorifying the killer and threatening more killings if there was any talk of amending the Blasphemy Law, sections of the electronic media have not been far behind. In fact, a generally apathetic PEMRA finally had to impose fines of one million rupees each on Samaa and Waqt for broadcasting interviews of Mumtaz Qadri. The image of the killer smiling smugly and being showered with rose petals is also being repeatedly telecast — an image that would be repugnant to most civilised people. Never mind that the semi-official Saudi newspaper Arab News called Taseer a ‘martyr,’ many anchorpersons here implied that Taseer had asked for it by speaking against the Blasphemy Law.

Some private channels, however, have made an attempt to widen the debate and not concede the ground to the extremists. In fact, Nasim Zehra invited a few of the ones campaigning on the streets, to her programme Policy Matters on Dunya TV in an attempt at rational discussion. The two programmes I watched left different impressions. In an equal representation of liberals versus clerics broadcast on January 14, the latter out-shouted the former. The three — Ayaz Amir, Javed Jabbar and Iqbal Haider — in spite of appeal to reason and humanity were unable to counter the irrationality of the clerics. However, in a subsequent programme on January 21, with a panel in which liberal opinion was in majority, the extremists’ position was more effectively challenged. Panelists Farida Shaheed, Nazir Naji, Hasan Nisar, Abid Hasan Minto and Dr Khalid Zaheer (who quoted from the Quran extensively) did succeed in putting the two — Farid Paracha of Jamaat-e-Islami and Ameer Hamza of Jamat-ud-Dawa — squirming in their seats.

However, as post-Taseer discussion on television has indicated, the liberals seem to have already lost the argument in favour of any significant reform in the Blasphemy Law. Repeal, of course, is now unthinkable. Most of the panelists are now reduced to pointing out that agitation on the streets is not justified in view of the government’s repeated reassurance that any amendment is out of the question. The clerics have, so far, not even conceded that the law is man-made and open to widespread abuse.

Dr Pervez Hoodbhoy has recently written, with anguish, about his experience as a participant in a programme hosted by Asma Shirazi on Samaa TV. He was faced with two opponents, Farid Paracha of JI and Maulvi Sailvi of Sunni Tehrik. Hoodbhoy reports that the audience of about 100 students, while unresponsive to his reasoned arguments, wildly clapped when the clerics called for death for blasphemers. This programme, like innumerable others, demonstrates how the private channels have contributed to brainwashing young minds.

So under the circumstances, what is the way forward? Athar Abbas, in his programme Column Kar on Express TV on January 8, demonstrated how a rational debate could be carried out even with the presence of a cleric. He invited Allama Ashrafi, Chairman of the Pakistan Ulema Council, who was openly critical of the hypocrisy and deviousness of religious leaders. In fact, he not only put forward cogent arguments but revealed how, in the process of Barelvi-Deobandi feuds, what is defined as ‘blasphemy,’ has been committed by those keen to denounce the likes of Salmaan Taseer. 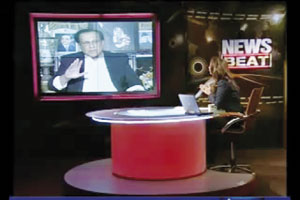 Many anchors on private news channels incite violence and have contributed to the brainwashing of Pakistan’s youth with unreasoned and extremist ideologies.

This is a model that other talk shows can emulate. If a faith-based argument is to be aired, let it come from a moderate mind rather than an extremist. Inviting religious extremists to participate in talk shows on blasphemy is akin to the Ku Klux Klan being asked by mainstream American channels to discuss the rights of blacks in the United States. A moderate or liberal interpretation of religion on prime time television may help to cleanse the prejudice ingrained in the minds of the majority.

Of course, censorship of programmes is no solution. The need for putting in place a self-regulation mechanism has been debated without any meaningful outcome. PEMRA, however, could initiate a system of responding to citizens’ complaints. If PEMRA does not have the resources to monitor all programmes, it should encourage citizens to send in complaints, along with video links and details of transmission which could then be cross-checked and action accordingly taken. Similarly, CPNE could respond to complaints against publications.

In an interview with BBC Urdu Service on January 10, Athar Abbas, in reference to Salmaan Taseer’s assassination aptly remarked: “Yeh qatil media hai.” This is a strong wake-up call for all those responsible for media accountability.