Although contemporary art tends to reflect upon personal experiences and current political situations, it often seems as though modern art avoids exploring the spiritual dimension of the genre. Art that contemplates a personal, metaphysical understanding of Islam appears to have been relegated to the past, as if it is somehow unfit for the modern era.

The recent exhibition of calligraphy and illumination at the Koel art gallery, entitled An Ocean within a Bubble, strived to achieve a two-fold goal. The first aim of the show was to reinvigorate the practice and the appreciation of traditional forms of calligraphy and illumination. But just as important was the attempt to showcase traditional poetry that explores the deeper truths of Islam. Organised by Baytunur, a trust that promotes the understanding of the Sufi method of tariqat, this exhibition seamlessly wove together the art forms of poetry, illumination and calligraphy in order to achieve a greater understanding of Islam. 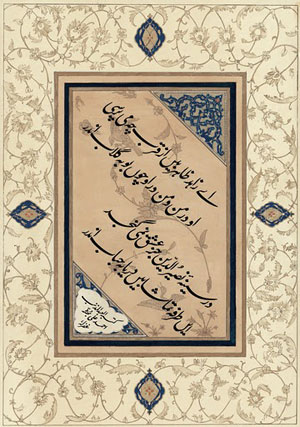 The show featured the work of several Pakistani illustrators and calligraphers — who reinterpreted the work of classic poets — divided into two sections of Arabic and Persian Poetry. The three most striking pieces consisted of just black calligraphy and tea wash on paper. The two smaller pieces, ‘Hu-He (Allah)’ and ‘Haqq-The Truth,’ were made by the calligrapher Ustad Khursheed Alam Gohar Qalam in Mirrored Thluth script, and the larger work, ‘I Am the Truth-Anal Haq,’ was done by the calligrapher Ahmed Ali Bhutta in Jeli Thuluth. These pieces brilliantly showcased the majesty of calligraphy at its most simple and minimal.

The exhibition was extremely effective in that it provided information of the work displayed, creating a highly educational as well as aesthetically pleasing experience. Alongside each piece of art was a plaque offering translations of the poetry. Additionally, these plaques provided greater insight into the life of the poet and analysis of the poem’s message.

As I walked through the gallery, which so effectively celebrated the works of traditional poets and traditional forms of art, I couldn’t help but imagine what a modern version of this exhibition would look like. It would be interesting to see a show in the future, which used contemporary Pakistani poetry with modern styles of illumination and calligraphy to create a new discourse on Islam.