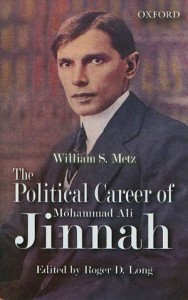 Biographies of Mohammad Ali Jinnah are nothing new to Pakistan. One need only stroll into the local bookstore to find entire shelves dedicated to his life — from his personal and political life, to critical studies concerning his key moments in office. What distinguishes William S. Metz’s The Political Career of Mohammad Ali Jinnah is first, the time in which it was written, and second, the manner in which Jinnah’s life is assessed.

Part of the first generation scholars of South Asian studies in the 1950s, Metz’s account of the political life of Pakistan’s founder is quite fascinating. Making use of a number of primary and secondary sources, Metz interest lies not so much in charting the details of Jinnah’s life as it does with the marked shifts in his political outlook. Hence, his study seeks to investigate why the secular-minded Jinnah — the ‘ambassador of unity’ — who worked initially for an independent India in which would reside both Hindus and Muslims transformed into the founder of a Pakistan reserved primarily for Muslims as envisioned in the two-nation theory. Breaking away from his contemporaries, who viewed his life rather negatively, Metz’s sensitive treatment of Jinnah does not only provide for a beneficial read for those interested in the lives of notable figures, but also historians seeking to chart marked shifts in South Asian historiography alongside understanding present times.

To understand fully Metz’ work, it should be placed within its historical setting. The question he seeks to answer — why Jinnah changed from the ambassador of unity to the propeller of the two-nation theory — is one that had been addressed by scholars preceding him. Three distinct opinions were popularly cited concerning the dramatic shift in his political outlook. The first, espoused by the scheduled caste leader Dr B.R. Ambedkar held that Jinnah’s political outlook was the result of deeply entrenched spiritual, historical, and cultural currents. The change in outlook reflected a larger force of antagonism common throughout Hindu-Muslim history in South Asia, which he was really not responsible for. The second, advanced by the feminist writer Bourke-White, looked at Jinnah’s personal life, and saw his marriage to his young Parsi wife as the cause of his initial nationalism. The sadness he felt when she left him and her early death, brought about a dramatic change in him. His pride, as Bourke-White saw it, could not face his old nationalist friends, and hence sought to carve out a vision separate from his earlier one. The third of the views, by Jawaharlal Nehru, saw Jinnah’s inability to fully understand Gandhi’s satyagraha, and his haughty, elitist and secular attitude, as the chief reasons for turning him away from the new make-up of the Indian National Congress and towards the two-nation theory and, consequently, the nation-state of Pakistan.

But according to Metz, none of these views clearly explain why Jinnah’s initial praise for unity changed to one calling for two separate nations. How could some uncontrollable spiritual force, personal tragedies, or misunderstanding of Gandhi’s philosophical view be the only reason for his changed view, when such positions are merely hypothetical and lack any real evidence? Rather, Jinnah’s change in political vision was a response to the changes which were occurring around him, pushing his position of authority into the margins. Specifically, the Indian Congress’ alliance with Gandhi’s politico-philosophical vision rather than practical politics, the disappointing Delhi Muslims Proposal and the Nehru report, the failure of the Congress Roundtable talks and later Congress meetings in the mid-1930s and the growing power of the Congress, which only increased Hindu-Muslim antagonism, made Jinnah realise that the two-nation plan might work best for safe guarding Muslim interest and minority status from the majority Hindus.

Jinnah, in Metz’s reading then, was not a stooge dancing to the whims of surrounding forces. Though his decisions were shaped by the larger politics around him, Metz attempts to argue that Jinnah’s dynamic character and leadership pounced on the various unpredicted events to establish and entrench both his own position of authority as well as the interests of the larger Muslim community. Hence, occurrences such as the ‘moth-ridden’ plan for partition which Jinnah was forced to accept at the last minute, did not really occur. Rather, through careful observation of political trends and by making the most of the various opportunities that presented themselves to him, Jinnah was able to secure a place for Muslims in the new nation-state of Pakistan.

Given that Metz’ work attempts to unscramble a very turbulent period in South Asian history, a number of problems are sure to creep up. For the most part, the South Asian scholar Muhammad Reza Kazami’s foreward points out many of the flaws existing in the work. For instance, he points out that while Metz consulted a number of primary and secondary sources while compiling his work, he had not travelled to India until after he had completed the present biography, he was not exposed to the political realities of India prior to partition and the newly emerged Pakistan after it. Further not having met Jinnah personally, or interviewed anyone who had known him, the studies’ reliability is greatly hampered. Also by not delving into Jinnah’s relationship with such people as Nehru or Liaquat Ali Khan, Metz’s work misses aspects very central to the moulding of Jinnah’s political vision, and potential reasons for changed political outlooks, so central to the overall inquiry being made.

One may also critique Metz’s work for placing too much emphasis on Jinnah’s personal character and not enough on the various people around him. Such people, locals and officials, could very easily have laid the groundwork or dictated, knowingly or unknowingly, Jinnah’s actions and change of opinions. Were Metz to have analysed his question of inquiry not by placing Jinnah at the centre, but rather fellow locals and colleagues, insightful observations could potentially have been made.

But this is not to say that the work should be dismissed. Readers of various backgrounds can benefit from reading it, as well as historians and general readers. Besides countering hypotheses propounded by the scholars of his time, Metz’ rendition of Jinnah’s life, from his early years as a law student in England to the last moments of the enactment of the Two-Nation theory, would interest those moved by the lives of influential leaders, or with South Asian history more generally. Metz’s own refusal to conform to his predecessors rather negative portrayal of Jinnah, offers useful information for anyone interested in the charting of South Asian historiography — perhaps more so for specialists attempting to understand how South Asian history has been written, what factors contributed to its overall shape, and when, or if at all, a break occurred between the orientalism of the past and the critical and unbiased inquiry of the present.

If read as an individual’s response to the challenges of marginalisation, a need for asserting power, or tackling communal disputes, Metz’s work also has the potential of shedding light on factors which force or drive people in authority to make the decisions they choose to make. While one may disagree with Metz in placing Jinnah in so central a position to the overall make-up of Pakistan, his rendition of the charismatic and far-sighted Jinnah bringing about changes and leaping on unforeseen events offers a model for leadership — relevant for present times and needed in regions troubled by crisis, confusion, and political turmoil.

Metz’s The Political Career of Mohammad Ali Jinnah is then a work of much benefit. The portrayal of Jinnah as an assertive leader who very aptly responded to the challenges around him is a pleasant break from the negative scholarship commonly found surrounding him in present-day Jinnah studies. It pairs nicely with the date Oxford University Press decided to publish it: around the time of Jinnah’s 63rd anniversary.