I often find myself saying that we Pakistanis need to identify ourselves. We need to look at our surroundings and locate the things that root us, give us identity and celebrate who we are ­— not dwell on the loss of past glory or remain saddened by the thought of some future we could have had.

Whether it’s due to disillusionment, or a studied disengagement, Pakistani art these days seems disconnected from our roots and reality. This loss of groundedness in artwork is particularly marked in our country, compared to others such as Sri Lanka. Perhaps this in part is because the global village has us awash in influences, and in part because the process of creating art is increasingly less organic and more contrived.

Guest curator at the Poppy Seed Gallery, Nafisa Rizvi had a sense of this, which resulted in the conception of the recent show titled Tea House.

She felt that the gallery setting was over time becoming very nuclear and that this might be causing artwork emerging these days to slide away from reality. For this show, Rizvi’s curatorial process started with a selection of seven artists. She then asked each one of them to select a non-gallery person to work alongside on a body of work. Each artist chose a person according to his or her liking, someone who complemented the technique that they were already employing. This complementary companionship resulted in a joint sense of purpose, giving birth to works of art rooted deeply in our space. The non-gallery person brought with him/her an outside sensibility, aiding the process of grounding that artists sometimes lose due to working alone.

The couples started work and after many discussions and engaging dialogue over the next two months, the artwork grew and began to take shape. 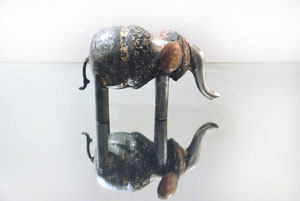 The artistic process was not easy considering that the couples consisted of an art school-trained contemporary artist and a completely non-artistic person. At many points the couples had to find a way around conflicting ideas and arrive at valid and stronger points of connection embodying the purpose of the show.

The manifesto of the show read: “While we cannot dwell on the past with nostalgia or sentiment, there is no reason we should throw the baby out with the bath. The commonalities that the tea house extracted from the diverse range of people and the ideas that were born from the heated, noisy dialogues had merit because they resonated with a sense of mutual exchange and an ostensible agreement to disagree. In the present show, we hope to re-create the aura of the tea house with a visual activity to substitute the once vocal din.”

On entering the gallery, the first thing that catches one’s eye is the sculptural work by Munawar Ali Syed, an NCA-trained sculptor, and Ismail, a welder. Ismail recently tragically lost the use of his legs, ending a promising career. Nonetheless, his positive attitude and sense of humour survived the physical tragedy. The titles for the reliefs and sculptures reflected the fun that these two men must have had. ‘Book of Physicality,’ ‘How to Become a Beast’ and ‘Main Bara Ho Kar Titly Banoon Ga’ series point towards the tongue-in-cheek sensibility of this body of work.

Durriya Kazi, Ayesha Alesworth, a law student, and Ali Hassan, a media art student, worked together on the popular SMS culture and how we are informed, addicted and irritated by this non-stop beeping process. Statistics show that 95 million out of 170 million Pakistanis use mobile phones. They examined the SMS as a means of communication and presented these SMSes on a screen as the day’s news. This work encouraged viewer interaction, urging the gallery audience to text a mobile number that was printed under the screen.

Sohail Abdullah’s works, installed in the form of a backdrop for a stage performance, were done in collaboration with Sameer Khan, a doctor. The two bonded over their love for words and poetry. These works show the wonderful overlap of interests in such diverse professions as visual art and medicine. It reminds one of never writing something or someone off at face value.

According to Madiha Sikander, an NCA-trained miniaturist, and Taimoor Shahid, a translator and scholar, “We both work with books. While I am primarily concerned with the book as visual space, Taimoor is concerned with the modes of reading. In this collaborative project, we dissolve the demarcation between image and word, texture and text. This makes the task of perception simultaneously sensory and cognitive, a process of meaning-making that is as much a part of the artwork as the artwork itself. When visual space melts into the textual, while the text freezes into an image, perception becomes laborious and thus akin to the arduous process of creation.”

Madiha and Taimoor discovered a common point in their family histories, finding a cross section between their joint histories and the larger picture of the events around the world. They executed their artwork on old maps and the binding of a book.

Ahsan Jamal, a miniaturist from NCA, befriended Salman Elahi, the sociologist. Salman is visually impaired and the two worked together on art that was facilitated by Ahsan’s eyes and Salman’s senses. The artwork produced gave a pure, clean feeling as though done by an uninhibited child. In this journey, the visual artist claims to have learned a whole lot from his non-visual partner in terms of observing the world around him.

Mariam Agha, the multimedia artist, and Dilshad Ahmed, the embroidery artisan, together expressed their love for Karachi by celebrating wall chalking, interpreting it through their own media. The quirky and relatable quality of these canvases easily make one smile.

Amir Habib, a multimedia artist, and Rehan, a mechanical troubleshooter, spoke through their work about the societal issues that they observed using found objects. Their work, displayed on mirrored surfaces, created that extra dimension and reinforced the value of the work, which essentially reflected on the problems and warped values that we see practiced around us.

The Tea House exhibit was a thought-provoking effort, but the question is, can the tea house as a symbol of a bastion of thought and discourse endure?