Every time there is an act of extremism, the liberal among us want to somehow counteract it or wish to go on record as opposing it. Why this desire to go on record? Because the liberal do not want the state to assume that the majority approves of extremism as a norm. Extremism has a natural tendency to create events of great outrage, like the killing of innocent people in the name of high principle when the Penal Code is silent. The liberal wants to demonstrate that the act was not only illegal, but that it was not supported by the people.

Yet, the truth is that the liberal among us are not in a majority. In fact, the category of ‘liberal’ is extremely difficult to define. Often, when political parties are described as liberal or conservative, they wriggle out of the label by acting on the basis of opportunism. The PPP is considered a liberal party, but its apostatisation of the Ahmadis was not a liberal act. In the realm of ideology, the PPP can act in an extreme fashion as it did when it nationalised the country’s economy. The MQM, labelled liberal at times, can support Aafia Siddiqui for political reasons and refuse to say fateha for governor Taseer in the Senate.

In Pakistan Terrorism Ground Zero by Rohan Gunaratna and Khuram Iqbal, the following paragraph tells us about Aafia’s involvement in terrorism: “Majid Khan, an American national, and Arab commander Ammar together planned to smuggle explosives to the US from Karachi using a Karachi-based textile import and export firm. Aafia Siddiqui, who also lived in Karachi, joined them. Forming a ruthless operational group, they ensured the survival of Al Qaeda in FATA and its ability to strike after the loss of Afghanistan. Against the odds, the Karachi cell members functioned as Al Qaeda’s foremost operational base and carried out many acts, from murdering Daniel Pearl to facilitating major attacks in Karachi, Tunisia, Indonesia and worldwide.”

It is difficult to skew the definition of the liberal. It can be described as an individual inclination to be found in all group designations. For instance, there can be a ‘liberal’ cleric (Javed Ghamidi) among clerics upholding hardline Islam. There can be a ‘liberal’ Muslim Leaguer and there can be a conservative member of the PPP. The very nature of the liberal militates against group alignment; he wants to retain his separate platform in the middle of two extremes, making concessions to either side on the basis of his ‘generous’ and ‘tolerant’ worldview. 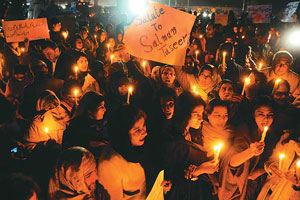 It is completely wrong to label someone as a ‘liberal fascist’ because the liberal is incapable of being a groupie, and fascism implies iron-clad organisational grouping with suspended individual judgements. This can happen among those dedicated to the manifestos of the political parties and the conservative person who usually finds himself in large groupings led by politicians and radical clerics. The liberal will always be entangled in ‘strategic’ inaction. He simply cannot agree with his fellow liberals on a collective plan of action.

The liberal is wrong when he equates his cause with civil society. The big split came in 2009 when some liberals supported the lawyers’ movement for the restoration of Chief Justice Iftikhar Muhammad Chaudhry in the shape of collaboration with ‘civil society.’ The liberal lawyers made the same mistake when they joined the majority of the lawyers dedicated to the extremist-religious worldview of their small-city background. Soon enough, a section of liberal lawyers separated from the lawyers’ movement because of the dominance of religious conservatism among the lawyers. (Lawyers in general supported the religious fanatic who killed governor Taseer). Not all the liberals were supportive of the movement after that.

Where does extremism spring from? If you take liberal ‘uncertainty’ and ‘doubt’ as your norm, then one can say it springs from certitude. In doubt, there is freedom to make concessions for those who think differently. Doubt here includes self-doubt to allow for a measure of altruism. It is also from doubt that moderation emanates: the instinct of standing in the middle when everyone is taking sides and is getting ready to clash. Among Muslims, faith (iman) and certitude (yaqeen) are considered synonymous even when their etymology points to different definitions. But my Lughaatul Quran says the Holy Book wants us to consider them synonyms (mutaradif hain).

The conservative is surer of his thinking because it is connected to the known past; the liberal is less sure-footed because he wants to question the entrenched attitudes of the past. It is certitude that inclines us to punish those who don’t agree with us. The liberal will appeal to us to consider his argument but will not threaten us if we reject him. The misapplied term ‘liberal fascist’ implies ‘power’ that the liberal does not wish to possess because he knows that his thinking is too individualistic for the formulation of a group capable of wielding the power to punish.

In Pakistan, extremism has morphed into an activism internationally defined as terrorism. The basic tenet of terrorism is the creation of fear. When non-state actors were massacring innocent people in Mumbai in 2008, their ‘guide’ was giving them just one instruction on the cellphone: create ‘khauf’ (fear) and kill as many people as you can to spread it among the living. Pakistani society lives under this fear which is more precisely called ‘intimidation’. If the state is weak — which it is, after dividing its sovereignty and monopoly of violence among jihadi outfits — it cannot protect its citizens against the kind of intimidation that warlord Fazlullah exercised over the people of Swat for two years.

That is why when the extremists rallied in favour of Salmaan Taseer’s assassination, their posture was that of intimidation. Media anchors and hosts became careful while facing this threat and allowed their discussions to tilt in favour of the man who had killed governor Taseer. The Urdu press was uniformly in favour of the killing for two reasons: the opinion of the editors and their fear of being punished on the basis of the terrorists’ ability to read only Urdu. The politicians were quiet because their profession exposes them to public places where they can be gunned down. The phrase “I could have been killed too” was uttered by many liberals scared of losing their lives.

The liberal has to be protected by the state because he claims the right of having his own opinion in the face of pressures of consensus. He cannot gang up with other liberals because he has equally the right to disagree with fellow liberals. Liberalism is not a creed, but an attitude. Pakistan’s Constitution is still liberal and therefore a butt of criticism for the clergy and Al Qaeda’s deputy leader Aiman al Zawahiri, whose critique of it produced an alternative Constitution — being distributed by the madrassas — based on the ‘certitudes’ of faith as related to discriminatory treatment of non-Muslims and clear disqualification of women to be prime ministers.

The liberal will always suffer from the ‘dilemma of strategy.’ He has been betrayed by the lawyers, who largely supported the killing of Salmaan Taseer. He was betrayed by MQM on Aafia Siddiqui. All he can do is gather with his small group to protest a wrong he wants righted. He wants to be the conscience of a country that has abandoned the path of doubt and has chosen certitude followed by a will to enforce laws that are clearly ‘black laws.’ In Pakistan, there is no liberal-extremist debate because there is no liberal-extremist polarity. When the extremist is in the field of combat, there are no liberal opponents willing to face him. The liberal can be the sacrificial lamb the extremist can munch on, after he has purged himself of violence.