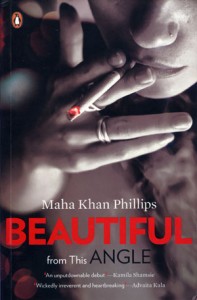 For a novel that has a lot to say about sex, Maha Khan Phillips’ Beautiful From This Angle prematurely blows its wad in less than 20 pages. Just the first chapter is packed with illicit drugs, lustful sex, copious drinking and a near gun-fight. The upside of this is that it gives the readers a fair warning of what’s to come. If you read for titillation and have run out of Jackie Collins’ novels, this could be the book for you. If you want dialogue that sounds as if it is spoken by actual humans rather than mere caricatures of humanity, a few pages should be enough to make you fearful for the future of the written word.

The plot of Beautiful From This Angle, although packed with incident, in my view, exists only to advance the author’s actual aim: to shock and scandalise readers. So, you have best friends Amynah and Mumtaz, the former a sex-crazed, pill-popping socialite and the latter a straight-laced do-gooder, who eschew conversation for sloganeering. Here’s a typical quote from Amynah, in a heated exchange over gang-rape: “I don’t laugh at women who are gang-raped by tribal council for something their brother supposedly did, and then are told to go kill themselves to show they are honorable.” I’m not sure which circles Phillips’ moves in, but outside of op-ed pages in indignantly liberal newspapers, no one talks like this.

Even the most apolitical person would have caught the Mukhtaran Mai reference in the above quotation. And that sums up perfectly the cynical marketing rationale behind Beautiful From This Angle. If you throw in enough culled-from-the-headlines references and drop a bonanza of brand names,

character no longer matters. At one point a character says, “This is such post-9/11 bullshit, and you’re benefiting from it.” Given that Phillips manages to shoehorn gang-rape, the Taliban and the assassination of Benazir Bhutto in a slim 200-page volume, she can be credibly charged with doing the same.

Once it’s been established that this is a book about sex, Pakistan’s debauched elite and hypocrisy, the plot slowly begins to come into focus. Mumtaz, with a mixture of cynicism and idealism, wants to make a documentary about ‘honour’ killings and women’s rights with help from “It” girl Amynah. With considerable embellishment, they decide to tell the story of a domestic abuse victim, Nilofer. A secondary storyline focuses on a British reality show being filmed in Pakistan titled, ‘Who Wants to be a Terrorist?’ (How’s that for subtlety?)

It is hard to get too drawn into the story when the author makes it impossible to root for or care about any of the characters. Here’s how Amynah and her friend Henna are described: “Henna believes in duty, family and honour,” while “Amynah believes in cigarettes, alcohol and Hello.” The contrast is too perfect and shows only that we are dealing in archetypes.

That feeling is only reinforced by the cringe-inducing dialogue. Tell me if you have ever heard anyone, no matter how hedonistic, speak like Amynah and her boyfriend Khalid. Amynah decides to call him when she is visiting Henna in her village. Khalid tells her, “I love the sound of your voice. It’s throaty and sexy and perfect.” Amynah replies, “Well, Mr Khalid, you’ll hear it plenty later, when we have phone sex.” As seduction goes, this is worthy of nothing more elevated than a D-Grade snuff movie. And it’s about as believable as that too.

Still, even this is preferable to an earlier quote by Amynah, when she tells a friend in a crowded room, “I know you were my shag buddy for a reason.” Making people say what they should be thinking is a hallmark of Phillips’ writing. But showing rather than telling would require toning down the dialogue and the depravity would then seem more realistic. That is not something Beautiful From This Angle aims for.

The one thing the novel has going for itself is that it is a quick, relatively engaging read, even though the plot often seems too far-fetched. As a satire, Beautiful From This Angle doesn’t work. For satire to be effective, it has to be rooted in truth and realism. But read the novel as a farce, and the broad characters and cringe-inducing dialogue can be forgiven.

Even then, the novel isn’t very funny. It is filled with aphorisms that would give the ghost of Woodhouse a coronary. Meant to mock the standard portrayal of Pakistan, Beautiful From This Angle is guilty of the same crime. It exists only to sensationalise the country to shift copies.