The brutal assassination of Salmaan Taseer and the growing stridency of religious extremists in its aftermath have widened the ideological divide in the country. It is not the first time that Islamic parties have tried to exploit religious sentiments to promote their political agenda, but such militant rhetoric seen over the last few weeks is unprecedented. The leaders of the Islamic parties and clerics publicly threatened to kill anyone not subscribing to their obscurantist views. What is more worrisome is the abdication by the state of its responsibility of providing protection to its citizens. Some of the mainstream moderate political parties have also joined the bandwagon, whipping up zealotry for their narrow political interests.

What the extremists have tried to do is to create a sense of fear and suppress the voices of reason and moderation. With a spineless administration giving in to their militant rhetoric, the extremists seem to have widened their political space which they had failed to gain through the ballot box. They have also been helped by a section of the media to project their extremist narrative.

It was perhaps the most shameful moment for the nation when lawyers, who are supposed to uphold the rule of law, lauded a murderer calling him “a soldier of Islam.” Many others who were at the forefront of the lawyers’ movement — heralded as the “black coat revolution” that paved the way for the country’s return to democracy — maintained a criminal silence while their colleagues glorified the brutality. But the worst came when Federal Interior Minister Rehman Malik, who is responsible for the country’s internal security, declared that he too would shoot anyone who commits blasphemy, giving the zealots the license to kill.

Are the religious extremists winning the battle for the soul of Pakistan? The issue of the Blasphemy Law may have brought the squabbling religious and sectarian groups together, allowing them to demonstrate their street power, but the battle is far from over.

Though in small numbers, the moderate Pakistan is fighting back to stem the onslaught of the extremist forces. Expediency may have forced the religious right to come together, but this unity is fragile. Most of these clerics have been responsible for inciting religious and sectarian violence that has left hundreds of Muslims dead. They have turned Pakistan into the most intolerant society in the entire Muslim world. Many respected Islamic scholars who challenged the extremists and militants have either been killed or forced to leave the country. Even mosques and shrines have not been spared in the bloody sectarian war.

This is certainly not the country that was founded some 63 years ago by Mohammed Ali Jinnah. And this is not a battle between liberals and extremists, but between those who want to turn the country into a theocratic dictatorship and those championing the cause of democracy, rule of law and religious harmony. It is a battle that will ultimately decide the direction the country heads in. 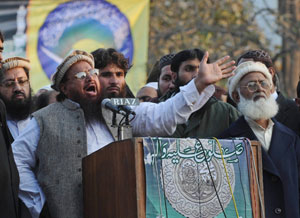 The power of the pulpit: Islamist parties, though never able to win a majority in parliament, have secured far greater influence than the number of their supporters justifies, preventing the development of a sustainable liberal democracy in the country. Photo: AFP

Throughout its history, Pakistan has been a state in search of its identity, and the struggle between religious extremists and moderates has remained at the centre of that quest. Though Pakistan was not founded as an Islamic theocratic state, from the start a battle ensued between moderate Muslims, who wanted a modern, democratic state, and religious extremists who agitated for a theocratic rule. Jinnah’s vision for Pakistan was of a modern democratic state, and Islamic fundamentalists opposed his demand for a separate Muslim homeland and considered him a heretic. Major opposition to the push for Pakistan’s independence came from the same elements that are now responsible for Pakistan’s descent into chaos.

Islamist parties, though never able to win a majority in parliament, have secured far greater influence than the number of their supporters justifies, preventing the development of a sustainable liberal democracy in the country. Largely due to the patronage of security agencies in the past, the forces of radical Islam have succeeded in infusing religion into the very fabric of the state. Despite their majority in parliament, the moderate and liberal parties have not been able to overturn discriminatory laws affecting religious minorities and women’s rights.

Since its birth, Pakistan has vacillated between periods of military rule and chaotic and corruption-riddled democratic regimes. The infusion of radical Islamic ideology into the civil and military institutions by General Zia’s military regime and policy of using Islamic militancy as a tool of foreign policy has largely been responsible for the rise of religious extremism, which now threatens to tear apart the social fabric. Claiming that he had a God-given mission “to purify and cleanse Pakistan,” Zia turned Jinnah’s vision of a liberal Pakistan on its head and created a theocratic state. The enforcement of so-called Shariah codes was used to dramatically curb civil liberties, especially women’s civil rights. The law that a defendant was innocent until proven guilty was reversed, putting the burden of providing evidence on the accused, which is now being used by clerics to prosecute anyone who they deem is “going against Islam.” 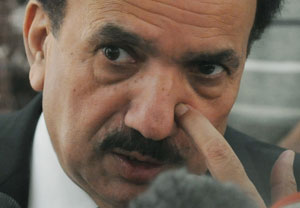 Leading by example: Federal Interior Minister Rehman Malik, who is responsible for the country’s internal security, declared that he too would shoot anyone who commits blasphemy, giving the zealots the license to kill. Photo: AFP

Even with the backing of the military regime, however, the Islamists failed to mobilise popular electoral support. The militant groups, which were created to fight Pakistan’s proxy wars, have now turned their guns inwards posing the biggest threat to the country’s internal security. Thousands of Pakistani soldiers are now battling the groups which were once developed as security assets. Some of these groups are still active and also participated in the recent rallies held in Karachi and Lahore. The continuing selective patronage by the security agencies to militant groups indicates that there has not been any change in the mindset despite the growing militant violence in the country. These armed jihadi militias now threaten the integrity of the country.

The extremists have also gained ground because of moral bankruptcy of our civilian leadership which comes from a feudal and tribal background. Their main interest is to protect their vested interests, which also explains the criminal abdication of the PPP government in the face of extremist violence. The government which claims liberal credentials does not realise that by giving in to extremists, it has also dug its own grave. It is now a battle to save Pakistan which demands a greater unity among the forces who want to revive the vision of Jinnah’s Pakistan.