Statistics are enough to make one shudder, but case studies reveal the even more ugly side of the picture.

Those who claim to be the defenders of the dignity of the Prophet (PBUH) and the sanctity of the Quran are the biggest offenders of the crime they accuse others of, unashamedly spewing lies and hatred in the name of the Prophet (PBUH) and religion. A look at the numerous — in fact too many — cases of blasphemy and of defiling the Quran reveals the dynamics at work and the ulterior motives behind the framing of such cases.

A resident of Mansehra, Nasreen had been turned out of her husband’s home by his second wife, and with no place to go, she made her way to the shrine of Data Ganj Baksh in Lahore. But something worse than homelessness awaited her. Nasreen Bibi was booked under 295-B by police officer ASI Bashir Ahmed, who accused her of burning portions of the Holy Quran. What had actually happened was revealed much later through advocate Pervez Aslam Chaudhry of the Legal Aid Centre for the Destitute who had taken up her case. When he met Nasreen in jail, she told him how the police officers had abducted her from outside the shrine, tortured and gang raped her when she had refused their advances, and to prevent her from lodging a complaint against them, falsely accused her of desecrating the Quran.

Another woman, who turned down the advances of her neighbour, had to pay the penalty like Nasreen. Naseem Bibi, along with her two sons, was booked under 295-B and all three were put behind bars.

While common spats are what lead to the filing of many such cases, there have been instances where charges were trumped up against co-workers based on professional rivalries. Akhtar Hameed’s is one such case. Remembered as the visionary behind the Orangi Pilot Project, Hameed was framed by an ex-employee whom he had fired and sued for misappropriation. In 1989, Mubin Afzal (who had links with the Jamaat-e-Islami) retaliated to his sacking by accusing Hameed of blasphemy, presenting Hameed’s interview in Takbeer (a Jamaat-run paper), as evidence. Numerous court cases and death fatwas followed, as well as an arrest without a warrant by a captain of the Pakistan Army. A year later, Maulana Ehteshamul Haq Thanvi also filed a case against Hameed for a poem he had written, claiming Hameed had insulted the Prophet (PBUH) and Hazrat Ali. Pressure by local and international rights groups, and a rare show of government support for the accused, as well as a verdict in favour of Hameed by a bench of 19 ulema, cleared him of all charges.

Niamat Ahmar, a Christian and the headmaster of a school in a district of Faisalabad, was accused by a fellow worker who wanted to move into Ahmar’s position. Ahmar became the victim of not only a false case, but also a brutal murder. In broad daylight, he was stabbed to death in the presence of many witnesses. The killer, who butchered Ahmar’s body to pieces, instantly became a hero for killing a “Christian blasphemer.”

Murders of those accused under the laws, in jails, during trials, outside courts or elsewhere, have been a constant feature. Iqbal Tahir, who was serving a jail sentence in Lahore, Robert Masih in Sialkot and Muhammad Yusuf Ali and Naseem Bibi in Kot Lakhpat Jail were all found dead in their cells. While jail authorities presented different reasons for their deaths, alleging suicide in Robert’s case and heart attack in Naseem’s, it is widely believed that fellow inmates killed them with encouragement from or the assistance of jail wardens.

Sometimes, verbal accusations serve as enough ground for murder. No FIR was lodged against 22-year-old Jagdesh Kumar, who hailed from Mirpurkhas but was working in a leather garments factory in Karachi. Instead, co-workers played judge, jury and executioner and beat the young man to death over an alleged case of blasphemy.

Occasionally, mob hysteria and the involvement of people from one’s neighbourhood or workplace, imams of mosques and members of sectarian outfits or religious political groups have been responsible for many such deaths and more. In 2002, Zahid Shah from Chak Jhumra was stoned to death. The charge levelled against Shah dates back to 1994, when he was booked under 295-B, on the basis of an FIR lodged against him by the village imam, who accused him of blaspheming against the Prophet (PBUH). Granted bail in 1997, he left his village and moved elsewhere. On his return to his former abode for a visit, he got into an argument with a few locals who reported the matter to the same imam who had filed the FIR against Shah. The imam responded by telling people to kill him. Four hours later, when the police arrived, Shah was already dead from the stoning. No arrests were made and Shah’s body was not sent for an autopsy either. The police maintained that since Shah’s family refused to file a complaint — evidently out of fear — no case could be registered.

The Sipah-e-Sahaba connection has been noted in the filing of many blasphemy cases, particularly in the Punjab. From lodging FIRs to flooding courtrooms during blasphemy trials to mobilising and instigating mobs to using physical force, they have been done it all. 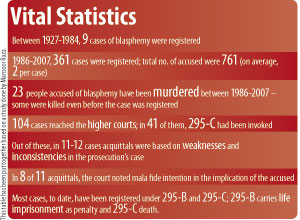 Following the arrest of Anwar Masih after a case was registered against him under 295-C, the SSP demanded instant justice — meaning instant death. The village of Summandri near Faisalabad came to a standstill after a strike call by the SSP, during which SSP’s student wing led a procession towards Christian homes, threatening to burn them down. While that threat did not to come to pass, unfortunately, like in Gojra, incidents of this nature have taken place.

In 2007, what began as a minor quarrel between children in the Bakhshi Park neighbourhood of Toba Tek Singh district, developed into a full-scale fight between the parents which was mediated by the elders of the neighbourhood but eventually assumed the shape of a blasphemy case. Without any investigations, one boy’s uncle, Abdul Ghaffar, with the assistance of police officials managed to slap charges against Salamat Masih and four other members of the Christian community under 295-A and 295-C.

And it didn’t end there. Abdul Ghaffar proceeded to instigate a crowd at a seminary by telling them that Christians had desecrated the Quran and trampled on the Prophet (PBUH)’s name with shoes. Upon hearing this, a mob of 80 attacked a Christian colony near Bakhshi Park. Several residents were injured and some homes were burnt down too.

Never has the law been applied against the perpetrators of such violence, as “investigations” lead nowhere and sufficient evidence or witness accounts are never available. Many of the falsely accused are forced to flee and take up residence elsewhere and, while they escape murder, they are confronted with a hand-to-mouth existence, and struggle for livelihood and subsistence.

Tariq Masih and Nargis, residents of Chakwal, had to flee their homes after being accused of desecrating the Quran. Tariq, who was an electrician, had to take up the job of packing spices for a company in Lahore, while Nargis, who was a nurse, ended up jobless in Islamabad.

In many of these cases, government officials were informed but remained silent to safeguard their vote banks. In one case, the SSP was able to broker a deal with the government, securing the release of some of their members. Often, lawyers have refused to fight cases — sometimes out of fear of repercussions and at other times from the conviction that the accused does not deserve to be represented. Judges, too, have cowered before pressure, especially when their courtrooms are filled with zealots who chant slogans and carry banners. And when there is one brave enough to mete out justice, like Justice Arif Iqbal Bhatti, who acquitted Salamat and Rehmat Masih, on death row as a result of a sessions court verdict, he is shot dead.

Muslim or non-Muslim, nobody is spared the wrath of those who use religion to justify murder and violence. Tragically enough, few question them.