It was inevitable that the United States would sooner or later resume the peace talks with the Taliban that President Donald Trump had abruptly ended on September 8.

And now Trump himself has announced that informal talks with the Taliban have already started. Before long, the peace negotiations would become formal and lead to the long-awaited deal that would ensure the withdrawal of foreign forces from Afghanistan in return for Taliban guarantees that no terrorist group with a global agenda would be allowed to use the Afghan territory for attacks against the US, its allies and perhaps other countries as well. 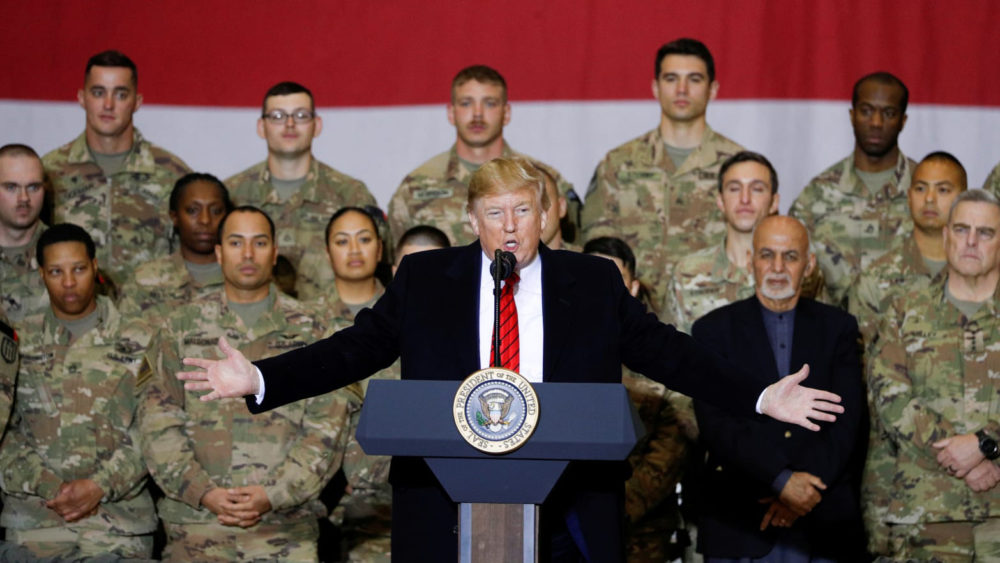 Trump made the disclosure on November 28, during his unannounced Thanksgiving visit to Afghanistan. Like the visits undertaken by previous US presidents, it was a night-time trip to the Bagram airbase that lasted about four hours and was made public after Trump had departed for home. All this was done for security reasons, but the way it was secretly conducted – even Afghan President Ashraf Ghani had to be brought from Kabul to Bagram to meet Trump – showed the insecurity prevailing in Afghanistan despite America’s longest, 18-year war in the country against the Taliban.

Trump’s announcement was not surprising as he had earlier hinted at resumption of the peace talks with the Taliban. It was only a matter of time that the two sides would revive their abandoned peace negotiations in a bid to conclude the deal. A military solution has long been ruled out as an option, but the US and its allies in the NATO took their time to admit this reality and start working towards a political settlement by talking to the Taliban.  Eventually, the US even accepted the Taliban condition to keep the Afghan government out of the peace talks.

In fact, the contacts between the Taliban and the US never really ended even after Trump declared the talks with the Taliban dead. Taliban sources are claiming that US officials had told them to wait as a change in Trump’s policy was possible. The breakthrough came in Islamabad when Pakistan managed to invite a Taliban delegation led by the group’s deputy leader, Mullah Abdul Ghani Baradar, and Zalmay Khalilzad, the US special envoy for Afghanistan Reconciliation, at the same time and facilitated their first meeting after the breakdown of the peace talks in Qatar. It was a signal that the Taliban and Americans were willing to explore the possibility of reviving their stalled dialogue.

The two sides then undertook some confidence-building steps, including exchange of long-held prisoners. Three important Taliban figures, including the Haqqani network founder, the late Maulvi Jalaluddin Haqqani’s youngest son, Anas Haqqani, who had been sentenced to death by a court in Kabul, his maternal uncle Mali Khan Zadran and colleague Hafiz Abdul Rasheed, were released in exchange for two western hostages, 63-year-old American, Kevin King, and Australian citizen, Timothy Weeks, 50, along with 10 Afghan Army soldiers. Anas Haqqani and Hafiz Rasheed had spent more than five years in custody while Kevin King and Timothy Weeks, who were professors at the American University in Kabul, had been kidnapped in August 2016. The kidnappings had been done by the Haqqani network, a powerful unit of the Taliban movement known for carrying out spectacular attacks, kidnappings and target killings, and the three Taliban members who were freed also belonged to the Sirajuddin Haqqani-led network.

The Haqqani network had earlier in June 2014 secured the release of five senior Taliban prisoners from the US-run Guantanamo Bay prison in exchange for Sergeant Bowe Bergdahl, the lone American soldier taken prisoner to-date in Afghanistan.

Though the prisoners’ swap, along with an earlier one in which 11 Taliban prisoners were freed by the Afghan government in exchange for three Indian engineers, put out of the way a hurdle in taking forward the fragile peace process and created a degree of goodwill, the US wanted more from the Taliban. Its two foremost demands have been Taliban willingness to hold direct peace talks with the Afghan government and observe a ceasefire.

The US has been calling for a permanent ceasefire or at least some reduction in violence to create favourable conditions for the peace talks. The Afghan government wants the Taliban to declare ceasefire to show a commitment to the peace process and to prove that the armed group’s leadership controlled the fighters in the field and continued to enjoy unity of command. The Taliban did not accept the US demands and ignored the beleaguered Afghan government’s conditions as the group does not recognise its legitimacy.

Though incidents of violence continued in Afghanistan, there apparently was some drop in the number of attacks for which the Taliban claimed responsibility. The attacks by the Afghan and US-led Nato forces also seem to have registered a decrease despite certain incidents in which civilians suffered casualties. It is possible that all sides, particularly the Taliban, realised that violence would have to be reduced to revive the peace talks leading to a workable deal.

If Trump is to be believed, which is difficult considering his record, the Taliban are now eager to strike a deal with the US and are even ready for a ceasefire. No such indication has yet been given by the Taliban, though the group knows that the peace deal that was negotiated with the US over a period of more than a year before Trump scrapped the talks is the best it could obtain in the prevailing circumstances. The Taliban will not let go of this opportunity to secure an agreement from the US that all foreign troops would leave Afghanistan as this has been their justification for fighting this war and primary demand since October 2001 when America invaded the country to avenge the 9/11 attacks. The withdrawal of foreign forces would give the Taliban a reason to declare victory and reassure fighters that their sacrifices over the past 18 years have not been in vain.

For the US, avoiding a total defeat and securing a face-saving pullout as a result of a political settlement with the Taliban would be the best bet in the given situation. Though Trump has always mentioned his intention to bring American soldiers home and abandon costly wars in faraway places such as Afghanistan, he still does not want to take the blame in case this country again becomes a haven for anti-US militants and terrorists in the aftermath of the US troops’ pullout. Though he has gradually curtailed the number of US troops in Afghanistan and brought it down to 13,000, he has also talked about maintaining a reasonable counter-terrorism force in Afghanistan to tackle global armed groups such as Al-Qaeda and the Islamic State (Daesh). Such a residual American force could also keep a check on the Taliban and monitor the implementation of a likely Taliban-US peace agreement.

However, much would depend on the Taliban and the anti-Taliban forces making up the existing Afghan political system for restoring peace and stability in Afghanistan. The two, bitterly antagonistic sides have to negotiate the future of Afghanistan as part of the intra-Afghan dialogue. The Taliban still do not want to recognise and talk to the Afghan government and continue to refer to it as a puppet of the US. President Ghani’s claim that the Taliban had agreed to hold talks with his government as part of the recent prisoners’ swap has neither been confirmed by the Taliban nor the US.

A lot more would have to be done to make things happen in the Afghan peace process as four decades of conflict have caused issues that cannot be resolved easily and quickly. In fact, 2018 was a promising year in terms of finally finding peace in Afghanistan due to the fact that the longest and the most serious and sustained peace talks between the Taliban and the US were taking place. The process continued during 2019 and a peace deal was almost clinched before the talks collapsed. It is possible 2020 would herald more hopes for finally achieving the cause of a badly needed peace in Afghanistan.