“Imagination is more important than knowledge. For knowledge is limited, whereas imagination embraces the entire world, stimulating progress, giving birth to evolution.”

The seeds of a Marcusian Utopia, sown in the late ’60s, endorsing political activism, upheavals and radical social transformation, seem to have borne fruit and gained solid ground over the past few decades. Interestingly, and perhaps by default, this growing emphasis on cultural relativism, structural inequalities and global capitalism, particularly post 9/11, has created numerous platforms and paved the way for Pakistani writers, artists and film makers, both home-grown and expatriates, in the international cultural arena.

While this has been a long-awaited and heartening trend, after years of invisibility, it usually comes at the cost of a compromised vision, one that generally tends to include the preferred motifs of fundamentalists, jihadists and burqas to fit into these divisive and reductive frameworks – the creative imagination has taken a back seat, dying a slow death, while artists increasingly take on the role of reporters, ecologists and sociologists, relying mainly on tricks and gimmicks; the visionary is fast becoming an anomaly.

This is not to say that pertinent or pressing issues should be overlooked or undermined in any way. Rather that, appealing to the imagination has always succeeded in hitting the point home, as opposed to the painfully overt, desensitising overtures, currently on offer. For instance, the timeless classic, Lord of the Flies by William Golding, still continues to evoke feelings of horror and discomfort from the resultant effects and aftermaths of war, without setting out to to be an anti-war novel – it jolts readers out of their ennui, by indirectly reaching the darkest recesses of their imagination, through its powerful symbolism and imagery.

Similarly, renowned Pakistani-American artist, Huma Bhabha, based in Poughkeepsie, New York, also defies this limited paradigm and falls into the latter category, relying solely on her creative power and unique vision to produce evocative and memorable works. Originally from Karachi, Huma went on to study art at the Rhode Island School of Design, USA in 1981, where she received a BFA in Print-Making and Painting in 1985. After spending two years in Pakistan, she returned to the US and attended Columbia University in New York City, where she earned her MFA in 1989. She was an assistant to the artist, Meyer Vaisman, in her second year at Columbia, gaining valuable insights into the professional art world.

While never formally trained in sculpture, Huma has earned much acclaim for her uniquely macabre figurative forms, the products of years of toil and experimentation. She is also equally prolific in creating intriguingly quirky and psychedelic mixed media drawings and photographic collages on paper. Her 3D experiments started with plastics, foam rubbers, spray paint and found objects to making paintings using wood and metal, while studying at Columbia, and moving on to also incorporating styrofoam, cork, rubber, paper, wire and clay, into her larger-than-life creations. She even worked with a taxidermist between 2002-2004, through which she gained access to more unique materials, such as discarded animal bones and skulls.

Huma’s extensive body of work has been showcased widely in museums and galleries across the US and Europe, from the Royal Academy of Arts, London and the Metropolitan Museum of Art, New York, to the State Hermitage Museum, St. Petersburg and the Venice Biennale 2015, among others. Her works are present in numerous collections which include the Museum of Modern Art, New York, Centre Georges Pompidou, Paris, Tate Modern, London, Metropolitan Museum of Art, New York and the Museum of Fine Arts, Houston, to name a few. She has also been honoured with a number of awards, including the Emerging Artist Award by the Aldrich Contemporary Art Museum, Connecticut, in 2008 and the Berlin Prize Fellowship in 2013. 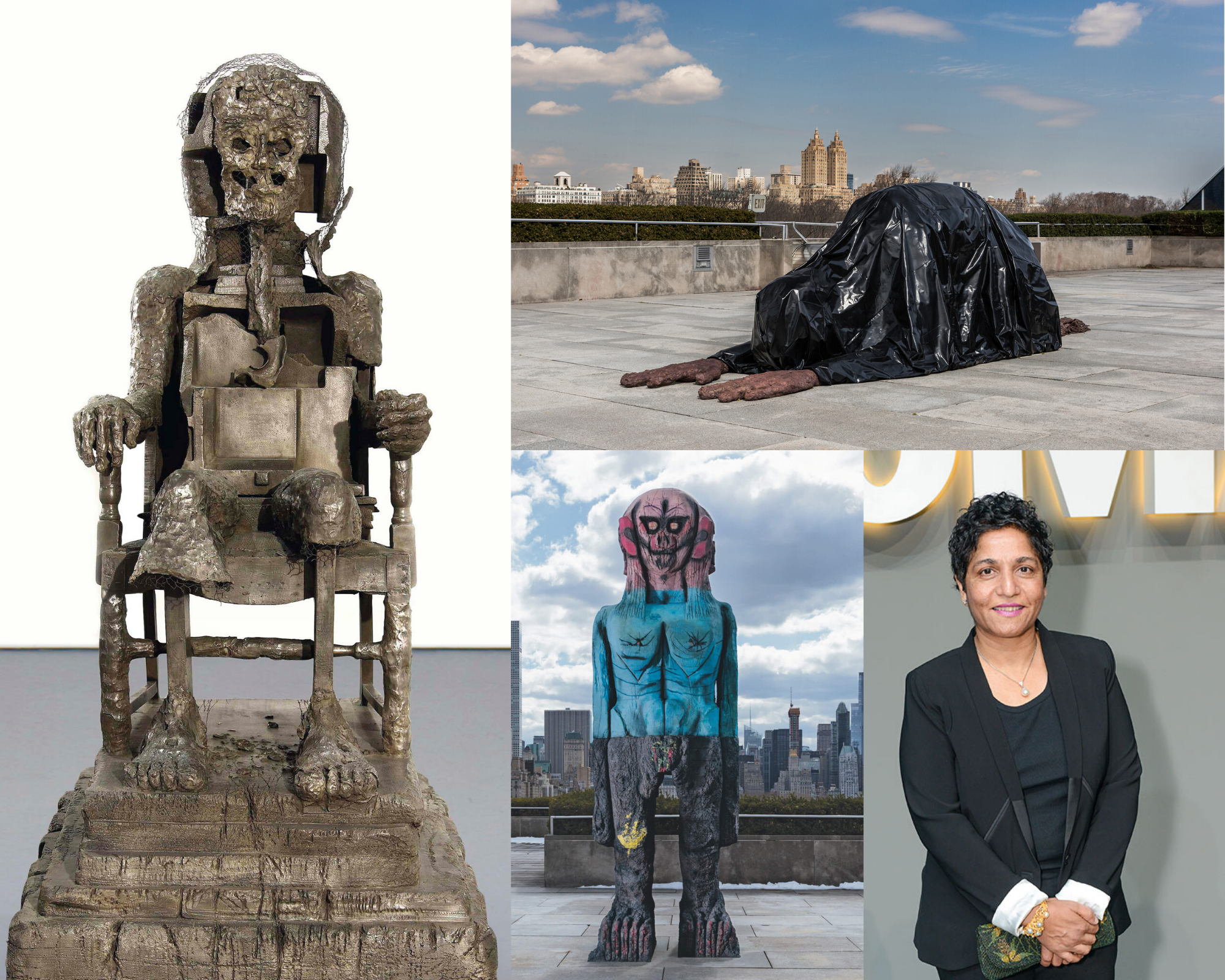 One of Huma’s most compelling and captivating exhibitions, was a show commissioned by the Metropolitan Museum of Art, New York in 2018, titled, ‘We Come in Peace.’ Installed on the rooftop of the museum, the show featured two gigantic figures, one standing tall, like an imposing totem pole, and the other, wrapped in plastic and prostrating before it. It immediately brought to mind that seminal moment from Stanley Kubrick’s classic film, 2001: A Space Odyssey, when primordial man bows before a monolith of alien origin. The supernatural realism of Huma’s standing figure was unsettling, like a being torn out of William Burrough’s, ‘Interzone’ or one of the ‘Nephilim’, from the Book of Enoch.

On a visit to Huma’s studio last month, I was able to talk more about this show and witness some of the labour and processes that are involved in creating these works. Her studio is housed in a large three-storied building in downtown Poughkeepsie, which was originally a fire house, constructed in 1906. She moved here from New York City in 2002 with her husband, Jason Fox, who is a painter. Huma’s studio is on the ground floor, while Jason’s studio is on the first floor; and they live on the second floor.

The biggest advantage about moving to this space was that it allowed Huma to work on a much larger scale than ever before. The figures for, ‘We Come in Peace,’ were pretty colossal, one around 12 feet tall and the other around 17 feet long. Both were created from two different processes as well as materials – the prostrating figure was modelled in clay, while the standing figure was carved out. Eventually, both figures were cast in bronze, using the lost wax process, at a foundry close to the studio.

While for Huma, ‘We Come in Peace,’ was very much an anti-war statement, she said she prefers to keep the meaning of this and other works ambiguous, to allow them to be open to the viewer’s own imagination and interpretations. She also deliberately chose to have only those two sculptures on the rooftop, to allow the works to have breathing space, with the stunning backdrop of the Manhattan skyline.

With so many shows in the West and many more to come, it’s a pity that Huma has been unable to show her work in Pakistan, barring a two-person show with her husband at a cafe gallery in Karachi, many moons ago. Without any funding or sponsors, the cost of bringing her work here would be astronomical and not really worth the trouble.

The visit to Huma Bhabha’s studio was one of the highlights of my trip to the US, not only because it was a pleasure to spend time with this intelligent and unassuming artist and see her work — but also, it gave me hope to see an artist of this calibre celebrated in an age where fools are generally put on pedestals and mediocrity is the order of the day.