The opening scene of Shamoon Abbasi’s latest film, Durj is reminiscent of The Silence of the Lambs, the psychological thriller in which Agent Clarice Starling (Jodie Foster), an FBI behavioral science trainee, is provided access to an incarcerated cannibalistic serial killer, Dr Hannibal Lecter (Anthony Hopkins). In Durj, Dr Farah (Maira Khan), a Pakistani psychologist, gets access to a notorious recaptured cannibal, Gul Buksh (Shamoon Abbasi), incarcerated in a high security prison. While in Agent Starling’s case the intent was to delve into Lecter’s mind and secure his help in capturing another twisted serial killer, Dr Farah’s is to find her missing journalist husband. And she strongly suspects Buksh might have the answer.

Throwing her professional career and caution to the winds, Farah manages to kidnap a chained Buksh from solitary confinement and takes him to a place where she can grill him. While the entire local elite police force is activated to search for them, Farah tries to elicit answers from the serial cannibal – but it is not that simple. Hardened by years of societal neglect and police brutality, Buksh responds to her aggression with amusement, and turns the tables on her, forcing her to listen to aspects of his life she would rather not know or hear.

If the hair-raising horror in The Silence of the Lambs made audiences feel fairly queasy, Durj does not indulge in depicting gory details – there are only suggestions of it. And yet the hideousness of digging up graves, hunting for humans and, cooking and devouring their flesh are all creatively implied – the hallmark of a talented director. Producer Shamoon Abbasi, has not only directed the film, but also written the screenplay and played the villainous lead as well. 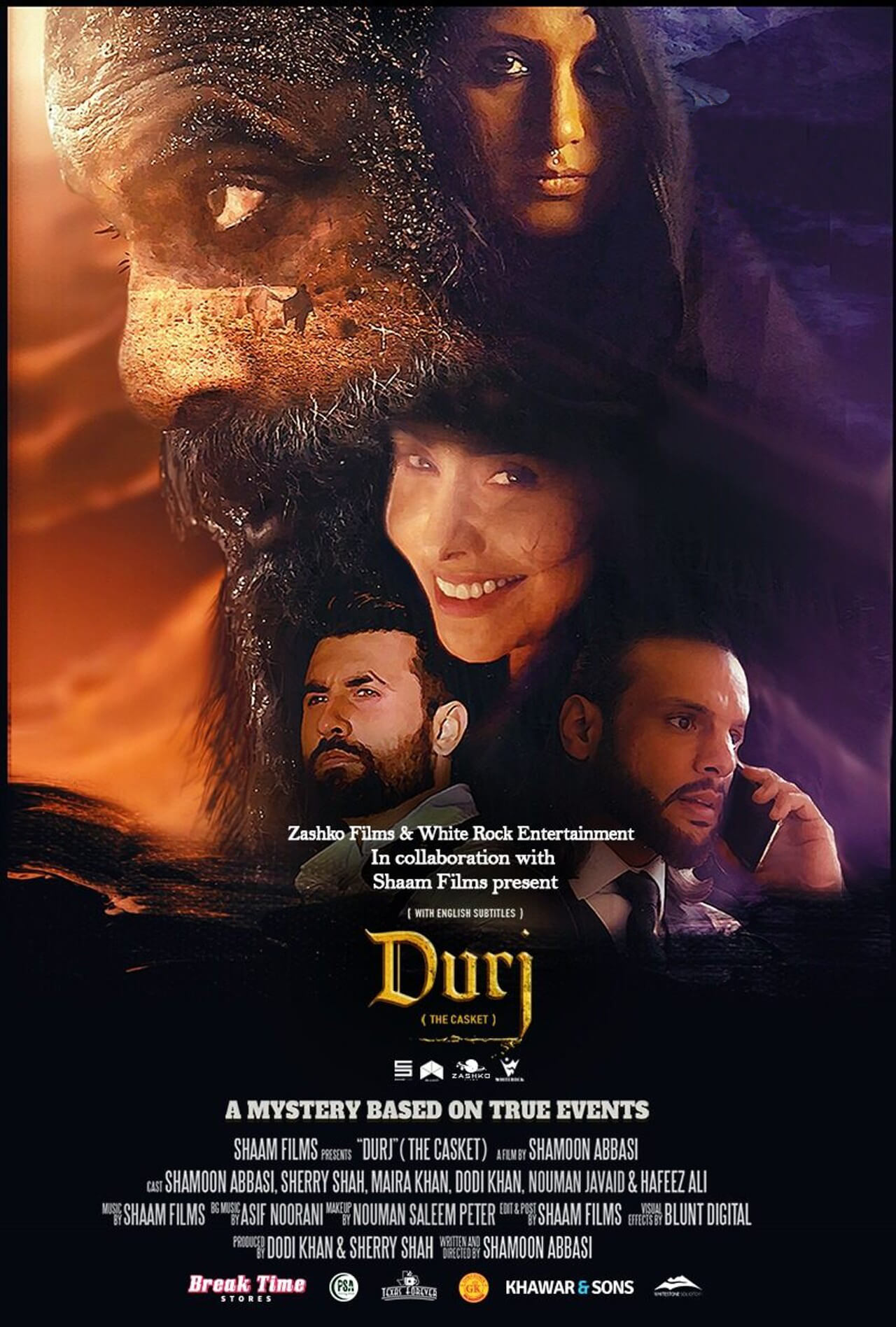 Inspired by two actual cases of cannibalism in Pakistan, particularly that of a pair of brothers from Bhakkar who devoured over a 100 corpses and were set free despite their dastardly crimes, solely because no law exists against cannibalism in Pakistan’s penal code. Shamoon Abbasi offers an interesting take in his latest psychological horror-thriller, that is – as bizarre as it may sound – almost humane, and without glorifying the subject.

Durj must be lauded for its creativity and commitment, more so since it’s a low-budget film that has been shot against the breathtaking barren backdrop of Balochistan and parts of Sindh. However, there are glitches in certain sections of the story’s timeline, that make a few of the sequences confusing. The weakest link in the story is Dr Farah’s character, and her dialogues. Her acting is below par compared to the others and she does not come across as a psychologist. By comparison, model-turned-actress, Sherry Shah’s physical transformation and performance as Laali is palpable. Shah gained 18kg and allowed her long locks to be shorn for the role.

Initially banned by Pakistan’s Central Board of Film Censors (CBFC) – it was cited as being “inappropriate” for public viewing – Durj was subsequently cleared by the Sindh and Punjab censor boards. The world censor boards however, gave the film a 14A certification, which meant that it could be viewed by children above 13 years. Abbasi went ahead with the film’s international release on October 11, in Canada, the US, Norway and Denmark. After its international release, Shamoon Abbasi took to social media and eventually, the Pakistani censor board relented and allowed its local release.

The film tackles a gruesome subject that has never been touched upon before which the Pakistani audiences may find unpalatable. That could be one of the reasons why Durj has performed so dismally at the box office, despite all the hype. But the film delivers a powerful message, nonetheless, on poverty and societal neglect. Durj has been well received in the international film community and, hopefully, it will fare better after its Netflix release.