A few years ago, I visited Hong Kong for the first time and found it so efficient, functional and shiny that I don’t remember much from that visit except for the variety of cuisine on offer. Earlier this month, when I boarded a flight to give a PEN-sponsored lecture about Literature and Human Rights at Hong Kong University, I was aware that the place had livened up quite a bit. “It’s not the kind of ugliness, you are used to in Pakistan,” a journalist friend based in Hong Kong assured me. “It’s a very Hong Kong type ugliness.” It did seem that even in their mass protests for democracy, citizens were practical and functional; they were working five days a week, then raising hell over the weekend.

I arrived on Sunday night and my hosts had hoped they could make use of the next five days when Hong Kong went to work and people came out to protest during their lunch hour.

I checked into the Hong Kong University hostel, blessed them for their super fast internet and went to sleep. In the morning, I was woken up by urgent messages from my hosts, warning me not to go out of the hostel, as there were widespread protests in the city. But it’s Monday, I said. “There has been shooting. Police have shot protestors.” Anybody killed? I asked.“No, they were shot in the legs, but this has never happened before. Don’t leave your room for now.” For a Karachiite, that’s usually the cue to leave the room. I watched the video being sent by my hosts. Police had shot an unarmed protester at close range. I ventured out, the University was deserted. I came across some students erecting barricades. I exaggerate; these seemed more like art installations as they comprised classroom furniture, umbrellas of every imaginable colour, scotch tape and ribbons. What was going on? Police might raid the university, they have issued warrants against five students, I was told. The students were rolling out contraptions made with three-inch long nails and rubber bands to welcome the police vehicles.

I tried to tell them that I come from a city where Rangers have made their home in Karachi University and when they need to pick up someone they don’t bother with warrants. In fact, in Balochistan there are universities where half the boys in any given class have been missing, and neither teachers nor parents know where they are.

Are my Hong Kong friends over-reacting a little bit to a simple law and order situation? I got a short lecture. The police has no business entering universities. Never has police entered this campus. Remember Tiananmen Square? That movement was mostly led by students, and even then the police didn’t go into the universities; they had to write letters to the authorities if they wanted to interrogate students. And that was mainland China and this is Hong Kong.

A few days later, the police would besiege the Hong Kong Polytechnic  University called PolyU, and the students would respond with improvised cannon balls, shoot fire-lit arrows and deploy giant catapults to halt them. This resistance strategy comes from students who have grown up watching The Hunger Games, a local journalist told me. 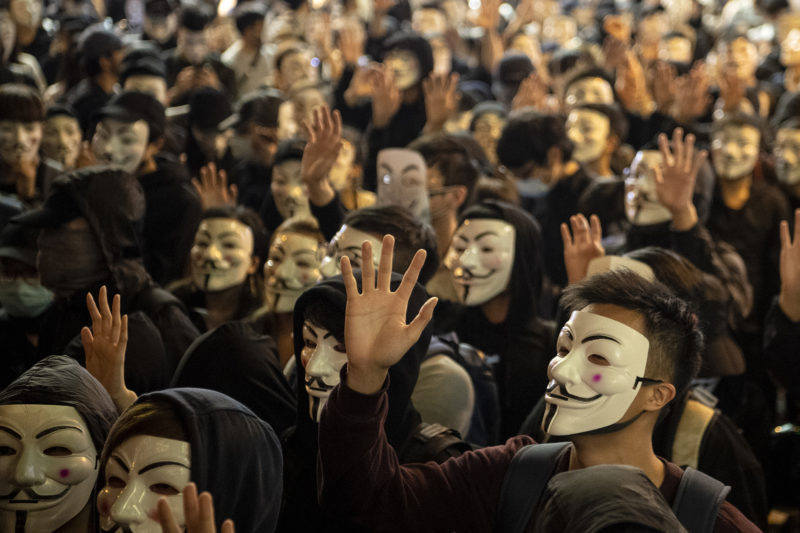 Protesters wear Guy Fawkes masks, popularised by the ‘V For Vendetta’ comic book film, as they gather in the Kowloon district of Hong Kong on November 5, 2019, to mark a month after a colonial-era Emergency Regulations Ordinance to prohibit the use of face covering at protests came into effect.

As the protests raged in the city, I retreated to my room and watched a police official addressing a marathon press conference. What is he saying, I texted my hosts. He was giving figures about tear gas rounds lobbed, cans of pepper spray used, and the number of rubber bullets fired. This was accountability at work. First you shoot us, then you tell us that we spent so much of your money shooting you, said my host. There were also figures about the number of people arrested and their ages, they ranged from age 10 to 64.

Your lecture can’t be held at Hong Kong University, I was told by my hosts, because the administration has decided to shut down the university, fearing an all-out confrontation between police and the students. I have a nice balcony in my hostel room, I joked; maybe some of us can gather there and I can give my lecture. We can stream it on Facebook, one of the organisers suggested and I suddenly realised it was a bad idea. You guys are constantly criticising the Chinese government, and I can get away with criticising the Pakistani government and occasionally Pakistan’s military establishment, but I can’t hear a word against our only ally in the world, China. As they looked for alternative venues, I managed to find my way out of the university and met up with local journalists and writers who offered to show me around Hong Kong. What’s there to see, I asked. Protests, they said; these days that’s the only tourist attraction in town. They opened their phones, there were apps to tell you where the protests were happening and apps to tell you where the police was about to raid. There was a big protest in central Hong Kong and that’s where we went. Hundreds of students had blocked the main road and were chanting pro-democracy slogans, wearing their banned black masks. One protester carried an American flag. That’s really going to make the Chinese authorities angry, a journalist told me. The roadblock itself seemed like a giant art installation. Some students were digging out the red bricks from the pavement, others were erecting them on the road like Stonehenges; yet another group was tearing down bamboos from a nearby scaffolding and putting them on the Stonehenges.  Armani and Apple stores in the background had shut down. On the giant TV screen in the Armani store window display, models walked their TV catwalk. Someone had sprayed on the screen: Police shoot us. They are also well paid. 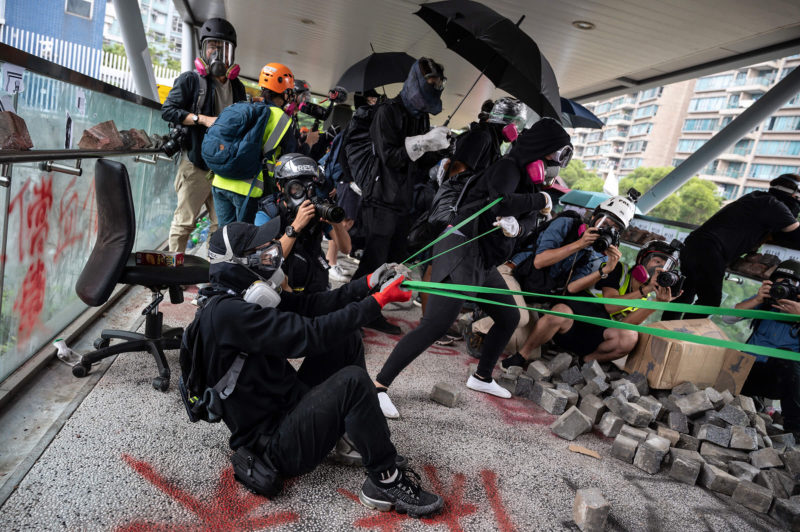 There was a rumour that police would arrive any minute, but they didn’t. Someone offered to show me the Captain’s Bar at the Mandarin Oriental, apparently a big Hong Kong landmark. At the bar, fellow journalists explained the genesis of the pro-democracy movement. Apparently, China believes that these people have had too much freedom and this was the time to bring them into the fold. A Pakistani businessman I would meet later said: “What is wrong with being like Shanghai or Beijing? It’s not so bad.” But Hong Kong’s young had no interest in becoming Shanghai. They wanted to remain Hong Kong. “What do they want to do? Burn Hong Kong down so that China can’t have it,” a pro-China businessman asked me. But  Hong Kong is too pricey to burn down. Outside the Mandarin, I had seen a small group of students trying to set a phone booth on fire while shouting who needs this phone booth. They didn’t seem to have any petrol, only matches and lighters and some paper, the fire fizzled out right in front of my eyes. One of the protesters posted on a bridge shouted something in Chinese. The protesters started running for cover in the side alleys. My eyes started watering. “It doesn’t smell like the teargas we are used to in Pakistan,” I said. I also told them that teargas sounds quite retro, we have water cannons. They have them too, I was told but for now, wear this, a journalist thrust a gas mask in my hand. 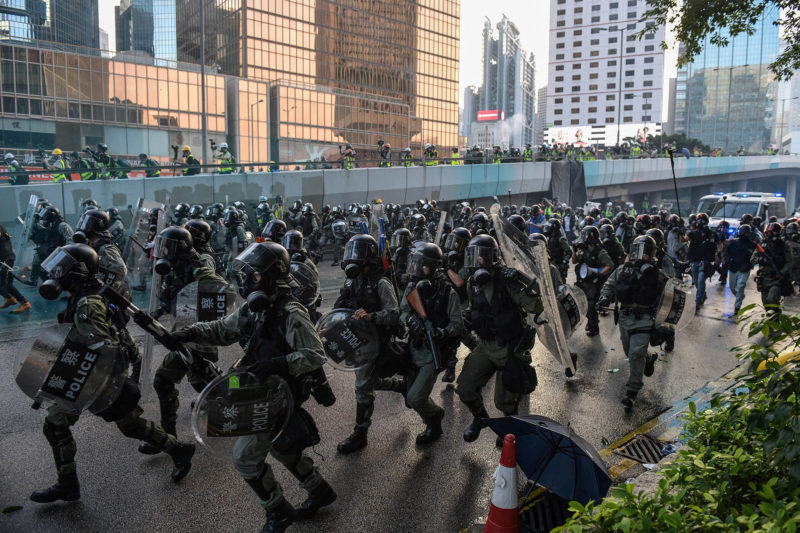 And then I saw the Hong Kong special police in action, gas masks, full body armour, batons. They are called Raptors and when I saw them descending on the remaining protesters in the side alleys, I realised why they were called Raptors, because not only did they want to beat the hell out of the protesters, they wanted to do it in style.

In the end, my lecture took place in a bookshop, and this being Hong Kong the bookshop was situated on the 27th floor of a building in an industrial area. We talked literature, we talked human rights, we talked China and Pakistan. A local journalist pointed out that the local elections were only 10 days away and the result would be seen as a referendum on China’s power grab in Hong Kong. The pro-Chinese administration was arresting and disqualifying pro-democracy candidates. They have learnt from their friends in the Pakistani establishment, I told my hosts.

The elections were held last week and despite their half-hearted attempts at rigging, pro-democracy candidates won an overwhelming majority. Obviously, China still has a lot to learn from the Pakistani establishment on how to manage elections.