Once known as the picturesque ‘City of Gardens’ famed for its shade-giving old trees, Lahore is now a city of signal-free roads, concrete fly-overs – and smog. Prime Minister Imran Khan, in a recent address to officials of the International Union for the Conservation of Nature, said that in the last decade almost 70 per cent of Lahore’s tree cover was cut down to make room for new roads and vehicles owned by a rapidly growing population. It has resulted in Lahore becoming unbearably polluted in the winter months. A thick haze descends upon the city and with citizens suffering from headaches, burning eyes and sore throats, many have resorted to wearing tight-fitting N95 masks (the only ones that work) when venturing outside and buying indoor air-purifiers for their homes if they can afford it. 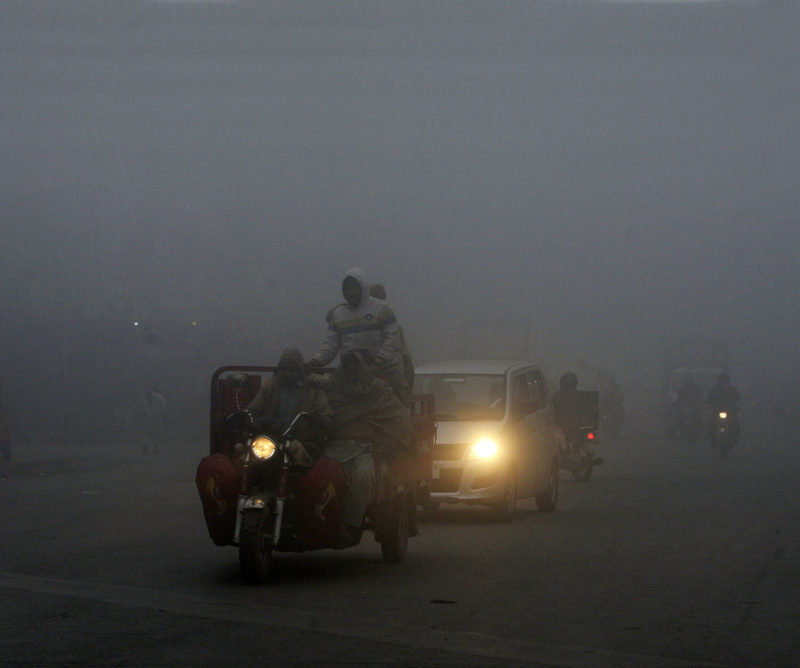 Air pollution is actually a year-round problem in Pakistan’s congested cities, choked with increasing emissions from vehicles, industries, brick kilns and power plants. During the rice harvesting season in October/November, when the rice stubble in the Punjab is burnt by farmers to clear the paddies, the pollution worsens. “In Lahore, the smog has increased in intensity, frequency and the number of days it lingers. The biggest contributor to the smog is transport, followed by steel industries, brick kilns and crop-burning, according to the Smog Commission set up by the Lahore High Court in 2017,” explained Malik Amin Aslam, the Advisor to the PM on Climate Change. Worldwide, it is estimated that around 4 million deaths occur due to air pollution. “It is a silent killer and a serious issue for Pakistan.” 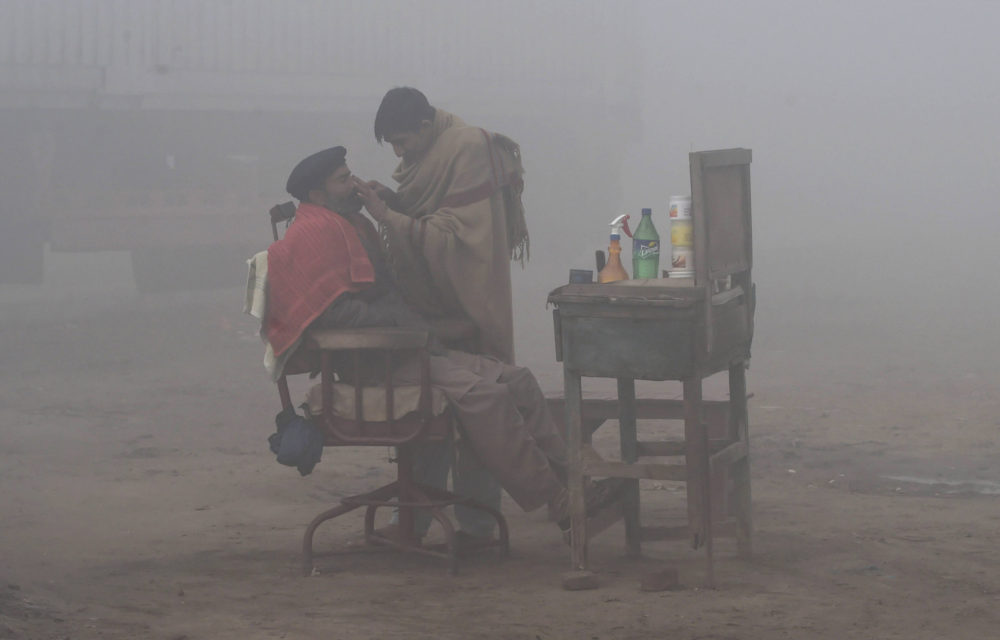 On November 6, there was a huge spike in air pollution in Lahore when the easterly winds changed direction, bringing in pollution from across the border.

According to Aslam, more data is needed to pinpoint the exact sources of the pollutants. For example, nearby Delhi has 37 air-monitoring stations and they have discovered that the burning of paddy stubble in Indian Punjab contributes to between a fifth to a third of the air pollution in Delhi these days, according to a recent report in the Hindustan Times. The report suggests replacing rice with millet, which anyhow requires less water to grow. In Lahore, there are only four official air-monitoring stations set up by the Punjab Environment Protection Agency. “We need more high quality air-monitoring stations and actionable data. The World Bank will be providing 30 air-quality monitors (10 for Lahore) under the Punjab Green Development Programme which should be on the ground in the next six months,” explained Aslam. “We have our own air pollution in Lahore but when cross-boundary pollution adds to it, the situation becomes unbearable.”

On November 6, for example, there was a huge spike in air pollution in Lahore when the easterly winds changed direction, bringing in pollution from across the border. By the evening, the city was cloaked with dense, black smog. Citizens felt it was like smoking an entire pack of cigarettes in one day; there was outrage on social media with people calling it an “air-apocalypse.” Air pollution levels spiked to over 1,000 on the Air Quality Index (AQI) on privately owned air monitors across Lahore, which are all linked to the Air Visual app. The outrage on social media led to the PTI-led government in Punjab shutting down schools. Environmentalists in Lahore have, in fact, been running a vigorous social media campaign since October this year, calling upon the PTI government to do more to tackle the smog situation.

Many of them have independent air quality monitors installed in their homes so they can keep track of the AQI and the particulate matter in the air, measured by PM 2.5. They have in the last month held press conferences and seminars at various local universities and hospitals. They have also signed a petition and presented it to the government. This is more or less the same group, ClimateActionPK, that organised the climate marches in Pakistan back in September as part of the global climate strikes called by the teenaged Swedish activist, Greta Thurnberg.

One of the local activists who is now on the Smog Committee set up by the Punjab government last week to look into the smog crisis, Attiya Noon, says, “For those asking why it’s important to close schools during hazardous smog: School buildings are designed to be open for ventilation for large numbers per room. It is not possible to close classrooms up to the extent that you can in your homes. The movement and waiting time for children around schools is lethal for children even for short amounts of time, given the higher AQI around them due to congestion of traffic. Lahore has the highest rate of drop-off and pick-up cars per child in the world. We see an immediate drop in AQI, for example on Saturdays, when offices are open but schools are closed. There was a big jump in AQI when schools reopened after a break. Countries like China, Iran and Thailand have regularly used school closure as a way of bringing down the AQI. It is known as a smog emergency protocol and has a legal basis.”

In the winter months, the smog only lifts when it rains or a strong wind blows it away. Otherwise the AQI stays in the 200-400 range, which is unhealthy and hazardous for Lahore’s citizens, especially the old and the very young. The pollutants cause asthma, bronchitis, pneumonia, eye infection and other more serious diseases. During this season, Delhi and Lahore routinely top Air Visual’s daily ranking of the most polluted cities in the world. The unhealthy AQI will probably stay in this range until February when it starts to get warmer and wetter in Lahore. Actually it is temperature inversion in the dry and colder months which exacerbates the pollution when a layer of cold air is trapped by warmer air above it. In the summer months, the pollutants can rise up with the warm air and quickly disperse into the atmosphere.

At a recent seminar on smog organised by the Sustainable Development Policy Institute (SDPI) in Islamabad, the former head of Pakistan’s Environment Protection Agency, Asif Shuja Khan, stated that a rapid increase in population in Punjab has led to an increase in the use of vehicles by 268 per cent in the last 15 years (motorbikes by 439 per cent, public transport by 167 per cent and private vehicles by 327 per cent). He added that there is a 12 per cent increase each year and the corresponding increase in fuel consumption is enhancing emissions. Pakistan’s coal power use has also gone up from 0.5 per cent in 1976 to 11.59 per cent in 2018. Coal-burning is one of the most polluting fuel sources in the world. “And we have yet to count the effects of the China-Pakistan Economic Corridor, when one trillion dollar trade through trucks will take place from China to Gwadar.” He would like the Pakistan Clean Air Programme (from 2005) to be revived. Before the 18th Amendment to the Constitution was introduced, this programme succeeded in removing lead in gasoline and attempted to bring Pakistan’s vehicles to Euro II standards of petrol quality (India is now on Euro IV). “After devolution, no one took responsbility for this programme. We didn’t move up from Euro II and we couldn’t even stop 2 stroke vehicles (polluting rickshaws),” he explained.

Imran Khalid from SDPI agreed that it is our development pattern that is heavily polluting – and in many cities we don’t even have proper waste disposal and continue to burn our waste, adding to the air pollution which occurs all the time. “Air pollution affects us all the entire year and not just those living in Lahore. Karachi is only saved by its sea breeze, which takes the pollutants out to sea. Even Islamabad’s air is unhealthy on many days of the year.” According to him, the poor quality fuel used in Pakistan is the biggest issue that no one wants to address. “Our fuel is very poor by European fuel standards and we need to improve our fuel quality as soon as possible.” 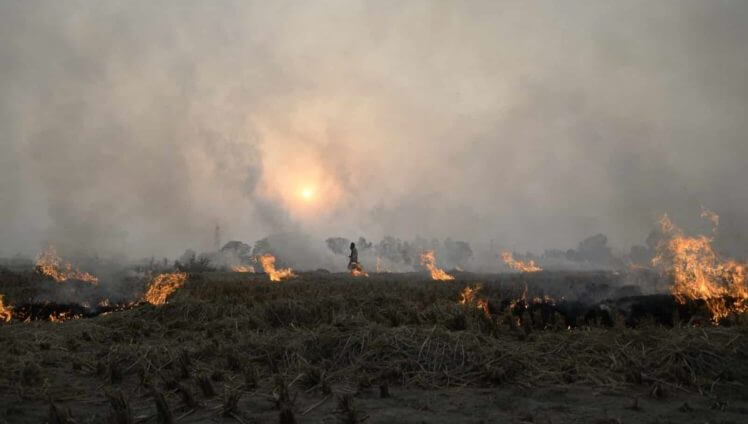 It will be very expensive to upgrade our refineries. However, at the Smog Committee meeting in Lahore, chaired by Hashim Bakht, the Minister of Finance in the Punjab, Malik Amin Aslam said that he would try to push for it at the federal level. In the meantime, he pointed out that the World Bank’s Punjab Green Development Programme will enhance EPA’s capacity by installing more air monitors and introduce vehicle inspection systems in the Punjab in the coming months. The vehicle inspection will be sourced out to the private sector and each vehicle will be required to have a “health certificate” as part of their yearly token. The programme will also provide a 15-million-dollar fund to shift away from polluting technologies used in steel furnaces and brick kilns and provide subsidies to farmers to move away from crop-burning within the next year.

Aslam is also planning to plant urban forests in Lahore from February next year and wants to set “clear timelines/targets” to tackle the smog. “Look, decades of bad development created this issue. We need to set our development right and the PTI government wants to lead on this. The cabinet has already agreed to an ambitious electric vehicle policy, which envisions the manufacturing of e-vehicles in Pakistan with China’s collaboration. Investors are excited – there are two crores polluting two-and three-wheelers and 30 lacs cars that can be shifted to e-mobility. It can help us in lowering our emissions levels. And we intend to take up transboundary smog as a bi-lateral issue with India, whenever it is possible. Malaysia and Singapore have a transboundary haze agreement so it can happen.”