The video blackmail scandal at the University of Balochistan (UOB) made national headlines. However, it was not the traditional media, which broke the story of this shocking incident. It was only when online media platforms broke the story that the print and electronic media started covering the scandal. Had it not been for digital journalists the story would not have become national news.

Following the decline of the traditional media in Balochistan, digital media is taking over as an alternative source of news.

In this article, the term ‘digital journalism’ has been used loosely to cover online news websites and social media accounts used for journalism. The genre of digital journalism has found space due to the decline of the conventional media in Balochistan. Even today more than 100 newspapers and magazines have active declarations – a legal right to publish. However, the newspapers available at stalls are not more than a dozen. Moreover, most of these publications do not manage to sell their daily papers in triple digits.

Likewise, the state of the electronic media is also not very heartwarming. Almost all news channels of the country had their bureaus in Quetta. However, in the last one year, they have had to scale down their operations due to the so-called financial crunch of the media. Several journalists have been laid off and some of the bureaus have also been shut down. Given the depressing scenario, even those journalists who are employed in TV channels do not feel motivated enough to do their jobs as reporters satisfactorily. 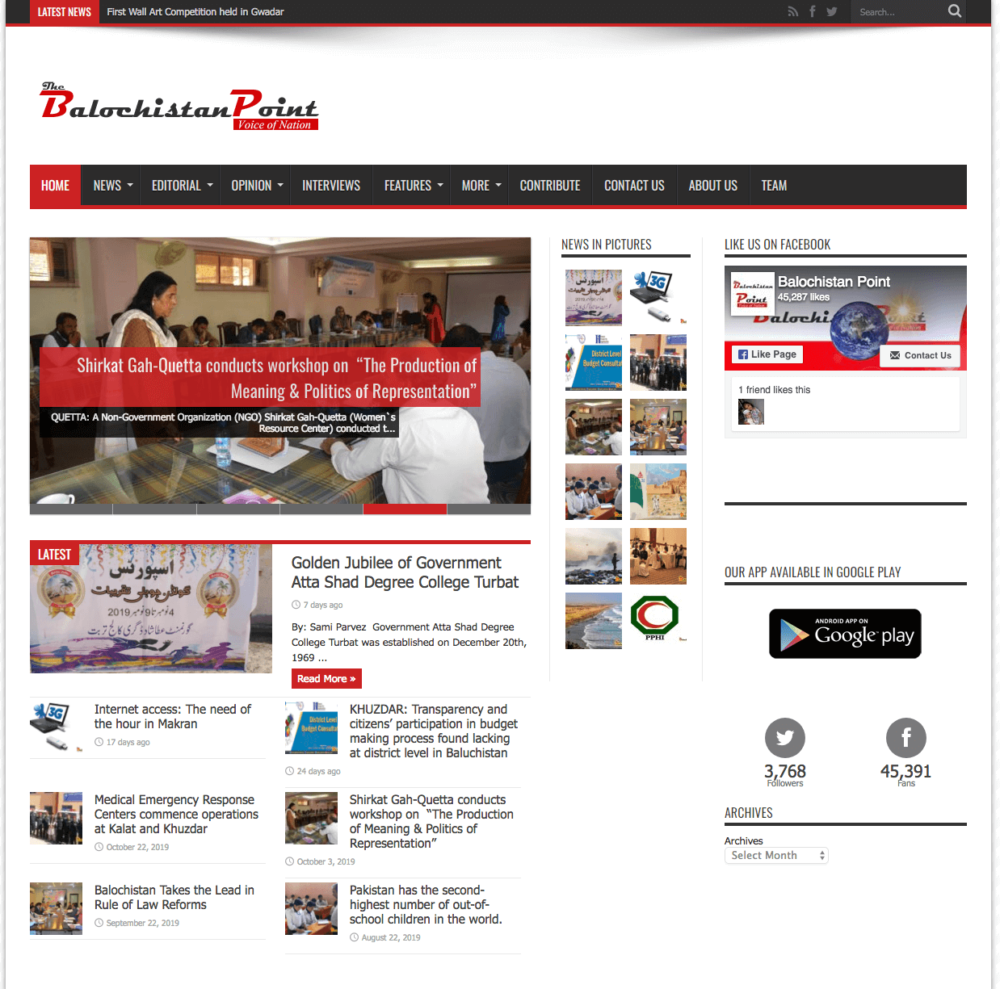 Today, there are more than a dozen online newspapers in Balochistan in English, Urdu and also in the Balochi and Brahvi languages. Out of 33 districts of Balochistan, there is not a single district that does not have its news pages on Facebook and Twitter, which publish the latest news updates. These social media news outlets provide a better, quicker and more comprehensive coverage of the news of the peripheral districts of Balochistan. They have effectively filled the vacuum created by the lack of coverage of Balochistan by the so-called mainstream media. This means that even with the traditional media in a state of crisis and operating under state-imposed censorship, the news coming out of Balochistan has not remained hidden from the world, thanks to the digital media. 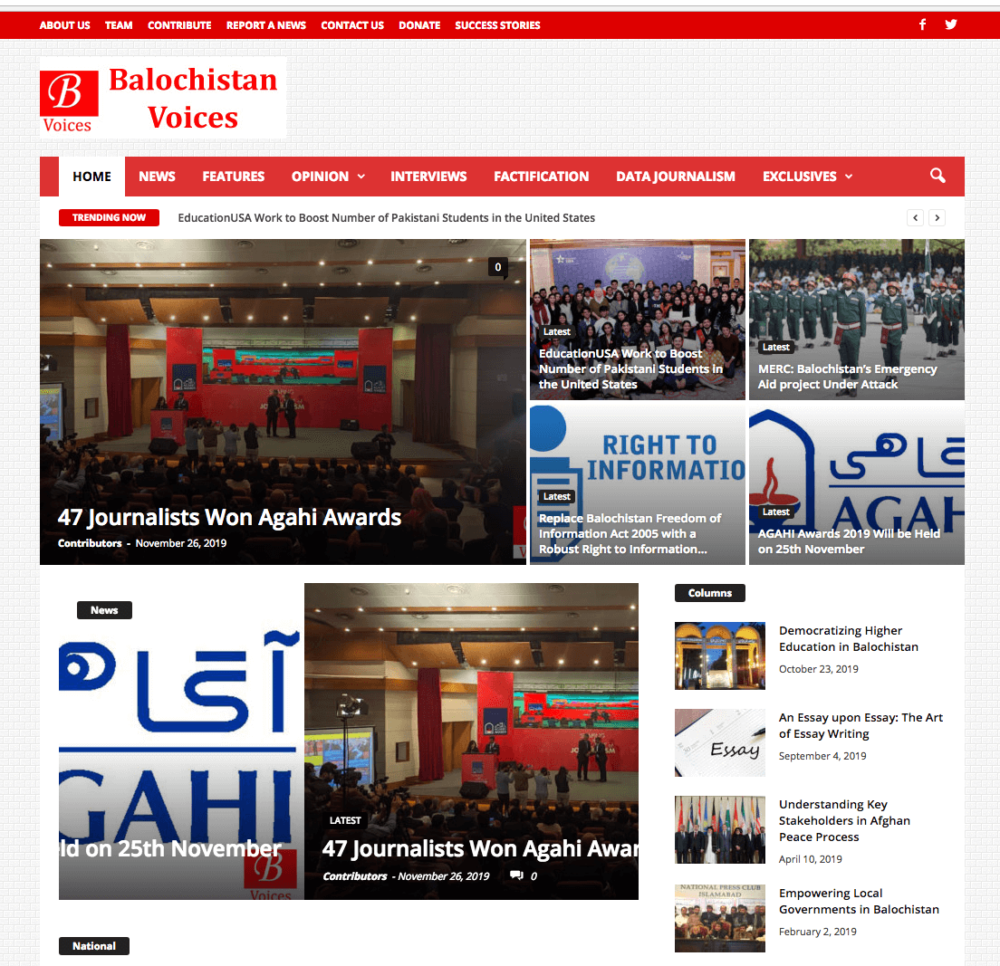 Sami Zarkoon is the convener of Civil Society Balochistan, a loose coalition of civil society organisations in Balochistan. He is a full-time activist and needs to rely on the media for the success of his work. He believes that the unregulated digital media of Balochistan has proved highly beneficial for activists like him. “For the last few years, we are not unduly worried about the non-coverage of our events by news channels, because we now have the digital media at our disposal,” he tells Newsline.

Over the years, Civil Society Balochistan has been instrumental in raising funds for cancer patients and recovering girls kidnapped from Balochistan. Zarkoon believes that digital media is responsible – to a large extent – for the success of the activism of his organisation. “In the absence of digital media, our activism will be completely ineffective because traditional media cannot report on what we protest about,” he says.

Not only has digital journalism helped in civil activism, but it has also contributed to fighting censorship in Balochistan. The traditional print and electronic media are heavily censored and they cannot report adequately on the pressing issues of Balochistan. However, digital media does not face similar restrictions. Although online news websites that cross the red line,are also blocked from time to time, they have the option of disseminating their content through Facebook and Twitter, which are not easy to block. Hence, digital journalists are able to report on the issues which are tantamount to crossing the red line.

Moreover, digital journalism has also opened up a world of opportunities for citizen journalists. There are many budding journalists who want to join the industry but find it hard due to the limited opportunities available in traditional journalism. However, the advent of digital journalism has changed the equation and now anyone who is interested can become a citizen journalist just by setting up a website or a social media account. This has democratised the sources of information dissemination, which, in turn, has empowered the common man.

While digital journalism has been beneficial in that it has brought down the barriers to one’s entry into the media, it has also been a source of problems at the same time. The digital media is unregulated in Balochistan – as in the rest of Pakistan – and therefore it is easy to abuse this platform. It has been used to defame, blackmail and carry out false propaganda against opponents, because there is no concept of gatekeeping and checks and balances as there is in the case of  the traditional media. In fact, many people have set up digital media platforms in Balochistan just to blackmail government officers and politicians and extort money from them. This is the most undesirable consequence of the rise of digital journalism in Balochistan.

Veteran journalist Shahzada Zulfiqar, who has been covering Balochistan for more than three decades, is also critical of the rise of the digital media in Balochistan. He disagrees with the notion that digital media can be an alternative to mainstream media. “Most people in Balochistan do not have access to internet,” he says, “so there is no way internet journalism can be a substitute for television and newspapers.” He maintains that digital media is only good for activism and commenting on news events.

Zulfiqar further adds that the real issues of Balochistan are enforced disappearances, economic exploitation and political manipulation, but these are not highlighted by the digital media. He also laments the fact that the advent of unchecked online news sites has compromised the quality of journalism in Balochistan. “The dark side of social and online media is that anything can be published without any sense of responsibility, and that’s bad for society as a whole,” he says.

Notwithstanding Zulfiqar’s view, digital media has become a force to reckon with. Today, one cannot visualise a scenario without digital media; there would be a complete blackout of the pressing issues of Balochistan for the outside world. Despite its many flaws, it is digital journalism, which is making it possible for people in the US and Europe to remain updated regarding happenings in Balochistan on a daily basis. Due to its effective use, the Pakistan government is looking for different ways to block digital news media, which speaks for the success of this platform.

Lastly, although digital media has filled the gap in terms of news coverage of Balochistan, it has failed to address the financial crisis in the media industry. An overwhelming majority of digital media journalists earn nothing or very nominal amounts from their platforms. This means that as of now digital journalism is not a viable source of livelihood for the journalists. Consequently, no journalist will remain in this field for long, and this makes digital media in Balochistan financially unsustainable.