For Surjit Singh Bajwa, a 78-year-old Sikh from India, who crossed the Indo-Pak border on November 9, following the opening of the Kartarpur Corridor, it was a walk that afforded him an opportunity to directly seek the blessings of Guru Nanak, the founder of his faith. He wept, he cried, he laughed – all at once – wiping his white, wet beard as he moved to one of Sikhism’s holiest sites in Pakistan – Kartarpur Sahib, a gurdwara so close he could stand at the border and gaze at its four cupolas, and yet so far. 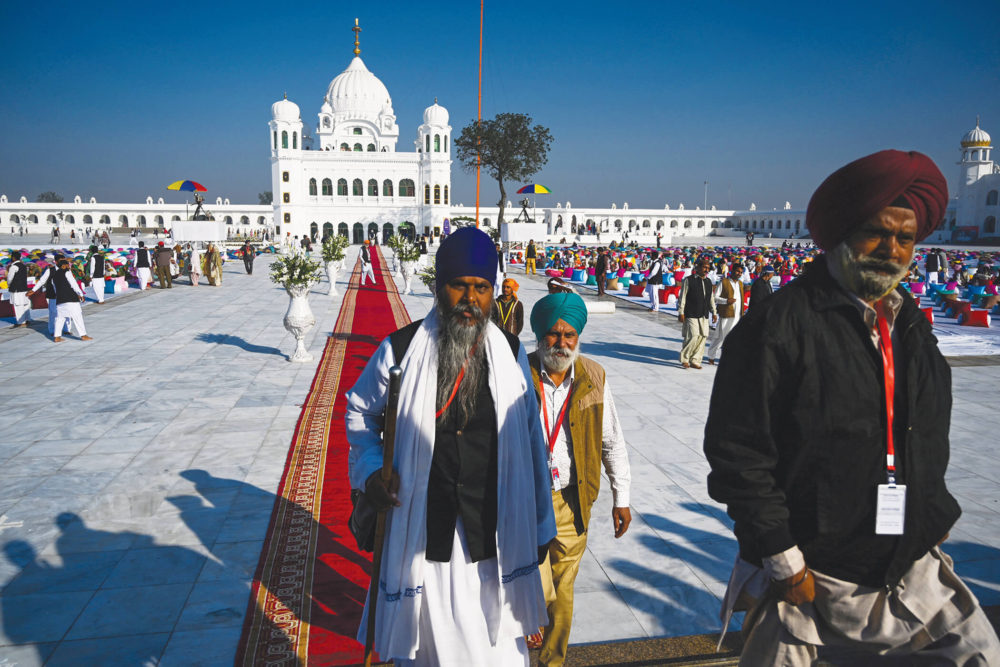 Bajwa was among the hundreds of Indian Sikhs who joyfully made the historic pilgrimage to Pakistan on November 9, passing without visas through a secure land corridor between the Indian town of Dera Baba Nanak and the Sri Kartarpur Sahib Gurdwara, Guru Nanak’s final resting place, which Pakistan had opened for Sikhs from India. This allowed them to visit the shrine in Kartarpur, a small town just four kilometres inside Pakistan where Sikhism’s founder Guru Nanak is believed to have died. The white-domed shrine – one of the holiest sites for nearly 30 million Sikhs around the world – has held a special significance for Indian Sikhs who initially had to secure a visa, travel to the Pakistani city of Lahore and then painstakingly drive to the temple or be content with viewing it through binoculars from India. Former Indian prime minister Manmohan Singh, who was also among the first pilgrims, called it a “big moment.” In 2006, a bus service between the Sikh holy city of Amritsar in India and Nankana Sahib was inaugurated by him.

The Kartarpur opening came just days ahead of Guru Nanak’s 550th birthday on November 12. Sikhs from around the world had started arriving in Pakistan much ahead of the celebrations, which hold huge significance for them. An estimated 7,000 – including those from across the world, besides India and Pakistan – attended the inauguration of the Corridor by Prime Minister Imran Khan. 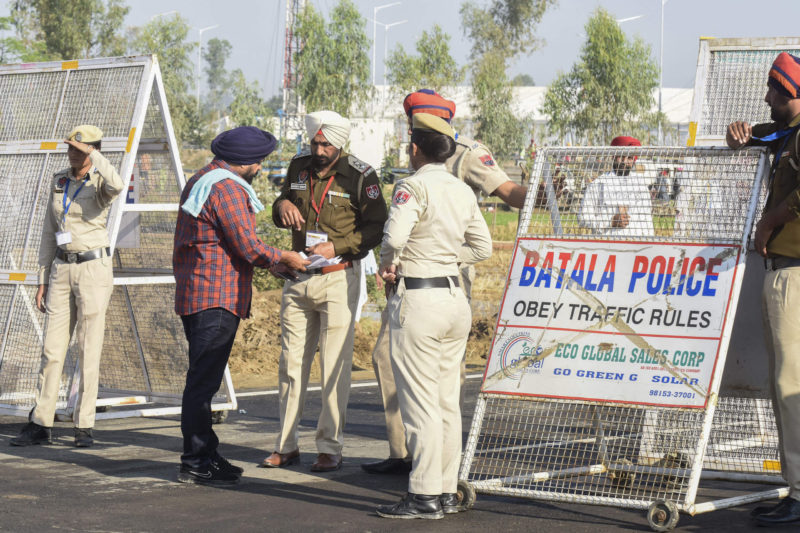 There are an estimated 20,000 Sikhs in Pakistan. And they descended on the Pakistani city of Nankana Sahib, located about 75km from Lahore, for Guru Nanak’s 550th birth celebrations, along with those from the Middle East, Europe, the United States, Canada and from neighbouring India. Nankana Sahib has nine gurdwaras. A vast complex, with large manned gates, marks the spot where Guru Nanak was born. It is called Gurdwara Janam Asthan. On the city’s eastern side is Gurdwara Balila, where he played as a child.

Sikhs consider Pakistan as the place where their religion originated. Over the past few years, Pakistan has renovated several smaller gurdwaras as well that have been lying in ruins for decades. The Gurdwara Beri Sahib in Sialkot, commemorating Guru Nanak’s visit to the city, has recently been renovated and opened for Sikh pilgrims. Gurdwara Sacha Sauda in Farooqabad, located about 40km from Nankana Sahib, venerating an important event from the life of the Guru, has also been restored and opened for Sikh pilgrims. Commemorating one or other aspect of Guru Nanak’s life, some 14 gurdwaras have been renovated and opened for pilgrims. In Hasan Abdal, 48km from Rawalpindi, lies a gurdwara known as Panja Sahib, which houses a sacred rock with the handprint of Guru Nanak. Twice a year, Sikh pilgrims visit this gurdwara from all over the world. Gurdwara Dera Sahib Panjvin Patshahi – the shrine of Guru Arjan Dev (1563- 1606 A.D) – is situated opposite the Lahore Fort near Badshahi Mosque in Lahore. This gurdwara, which has a highly attractive gilded dome, was built by Maharaja Ranjit Singh in memory of the Guru, who compiled the Adi Granth, the principal part of Sikh scriptures. His followers assert that this is the same spot where Guru Arjan Dev miraculously disappeared in the waters of river Ravi in 1606 AD. The samadhi or mausoleum of the Sikh ruler Maharaja Ranjit Singh is also located here. 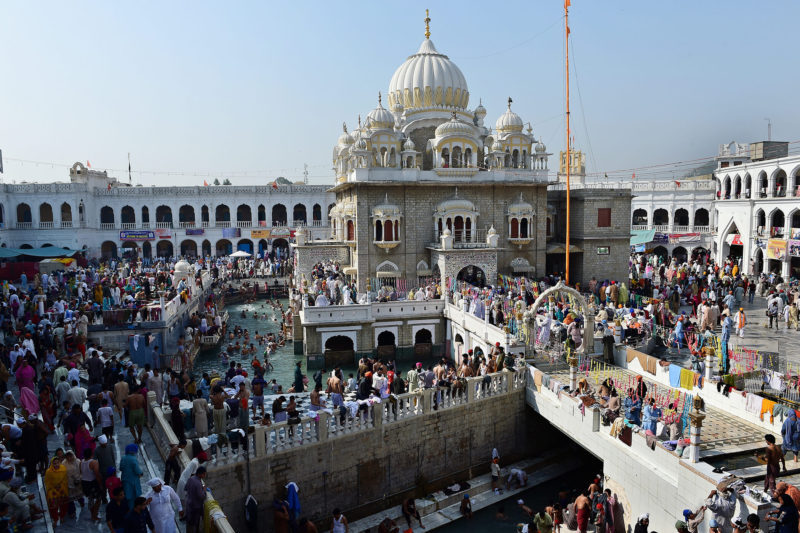 Besides the Sikh gurdwaras of historical importance, Pakistan, which is located in a region that has been home to the world’s other two major religions – Hinduism and Buddhism – for centuries, promises travellers an unparalleled experience. Besides a magnificent collection of mosques and Sufi shrines, it also boasts Hindu temples and Buddhist monasteries.

The ancient Hindu temple complex at Katas Raj, in northeastern Chakwal district, is one of the holiest sites for Hindus in South Asia. The followers of the faith equally revere the water of a lake in the temple that they believe was filled with the tears of Shiva, one of the principal deities of Hinduism. In Karachi, a 1500-year-old Panchmukhi Hanuman Mandir has an original statue of the Hindu deity ‘Hanuman.’ The Hinglaj Mata Temple in Balochistan also holds significance for Hindus. 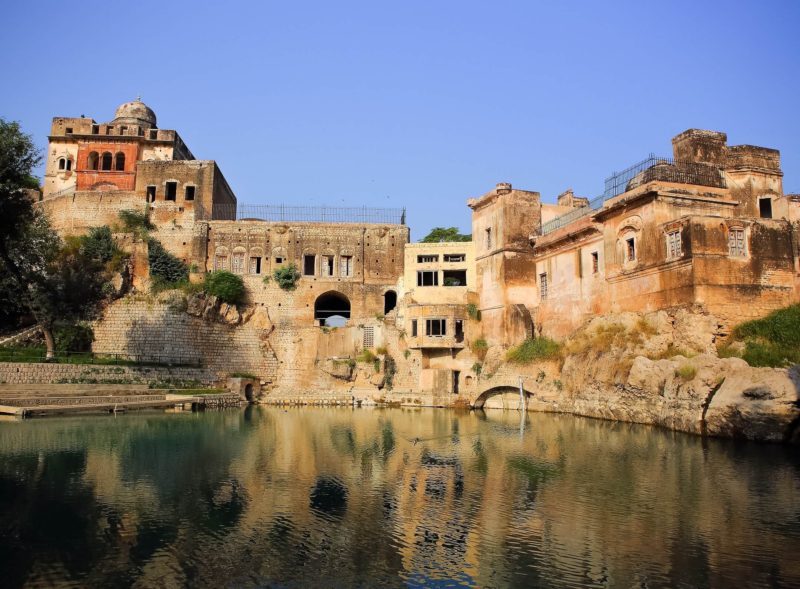 The Katas Raj Hindu temple complex in Chakwal district is one of the holiest sites for Hindus in South Asia.

In Takht-e-Bahi – a small scenic town 160 kms from the capital, Islamabad – stand large to medium-sized stupas of Gautam Buddha, the founder of Buddhism. Other heritage sites from the northern Gilgit-Baltistan region and the Swat valley are indicative of the extinct civilisation in this region. Taxila, 27 kms from the country’s capital Islamabad, has a Mesolithic cave and the archaeological remains of several Buddhist monasteries. In 2017, Pakistan unveiled the remains of a 1,700-year-old sleeping Buddha near Haripur, in Khyber Pakhtunkhwa province. The 48 foot-high Kanjur stone Buddha is from the 3rd century AD, the remains of the world’s oldest sleeping Buddha. Korean Buddhists trace their religious origin to the area that is now Pakistan. The Korean monk Hyecho was said to have travelled to the area that now comprises Pakistan 1,300 years ago. 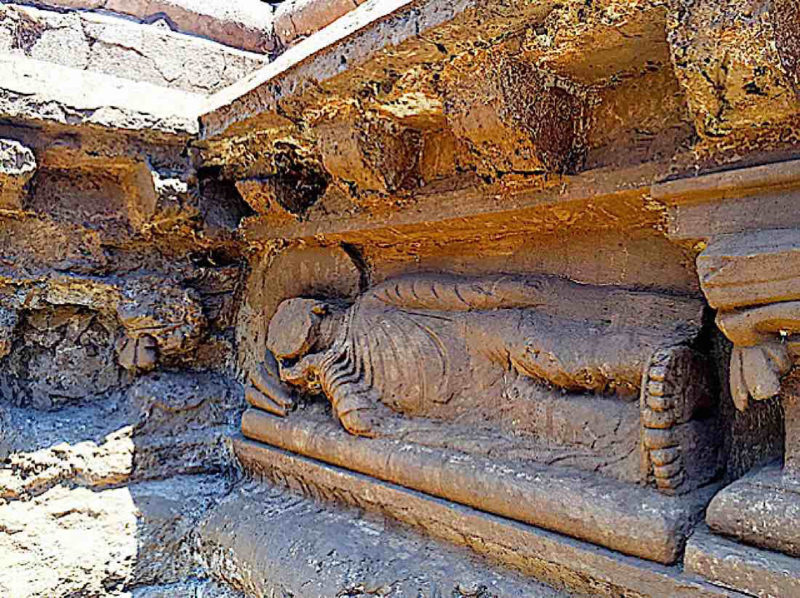 A small version of the 45-foot sleeping Buddha discovered in Bhamala.

Pakistan is fortunate to have the religious sites of some of the greatest religions of the world.

And yet its tourism sector presently contributes only 2.8 per cent to the country’s gross domestic product compared to South Asia’s regional average of 3.5 per cent. At world average rates, if international tourists were to come to Pakistan, it could contribute $3.5 billion to the GDP, which would be equivalent to the value of Pakistan’s largest current export item: cotton. Increased employment and economic activity in the areas housing these religious sites would be an additional benefit.

Pakistan has great potential for religious tourism. The law and order situation has improved. The government has announced a new visa policy – a plan to provide online visa facility for 175 nations – and has relaxed the system of No-Objection Certificates for certain regions. Pakistan should go for a sustainable tourism policy, one that leads to cross-sectional and regional employment generation, that directly contributes to the national economy and government revenue, the currency inflow and infrastructure investment.