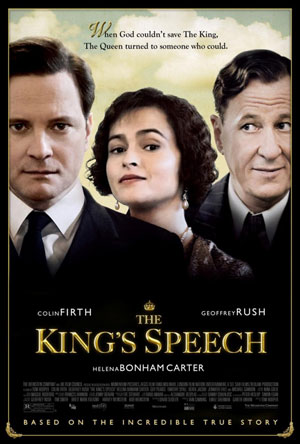 The much-acclaimed The King’s Speech is based on the life of King George VI, the stammering monarch. However, rather than focus on his position when enthroned, it narrates events from the period leading up to this event, from his being compelled to take the throne on his brother’s abdication, to his preparation to ready himself for the position — a vital part of which is seemingly flawless articulation. It is a personal story, an endearing tale of friendship, familial ties, the pressure of being a member of the royal family and, of overcoming the odds. And it is the depiction of a story, which has received the royal nod of approval from none other than the daughter of the film’s main protagonist: Queen Elizabeth II.

When his older brother David (Guy Pearce) abdicates the throne to marry his twice-divorced American sweetheart, Wallace Simpson, second in line to the throne, Bertie (Colin Firth) is thrust at the helm of affairs. For the retiring Bertie, this is an unmitigated nightmare. In modern England, it is no longer enough for a king to simply pose on horseback. The demand of the day is that monarchs must present themselves before their subjects and address them on the airwaves. For Bertie, public speaking is a source of great embarrassment: since the age of five, he has stammered.

Bertie’s concerned wife (today she is more commonly known as the Queen Mum), played with great aplomb by Helena Bonham Carter, has contacted every doctor worth their name to treat her husband, but to no avail — until she hears of a certain therapist, Lionel (Geoffery Rush). The self-taught Lionel is not a doctor and his unorthodox methods of treatment make him suspect in many eyes. Nonetheless, the unconventional system of therapy he has devised has seen some success and so after several refusals and even an occasion of storming out of the cheeky-bordering-on-impertinent therapist’s office, Bertie finally agrees to Lionel’s treatment.

This is a journey packed with endless light moments. The king-in-waiting is made by Lionel to roll on the ground, scream out of an open window, do breathing exercises with his wife perched on his stomach and encouraged to swear, rant and rave, among other exercises. The therapist also uses psychotherapy on Bertie and through the course of the treatment, he makes it clear in no uncertain terms that he will not brook any flouting of his rules. His insubordinate attitude often causes Bertie to lose his temper, like the time Lionel seats himself on the king’s chair while preparing the latter for his coronation speech. However, eventually, the daily encounters between the odd couple lead to an enduring friendship.

Colin Firth, Helena Bonham Carter and Geoffery Rush all act out their parts with effortless ease — not surprising, given their impressive body of work. We’ve seen Firth play a stiff, reserved member of the gentry in Pride and Prejudice, and while some parts of his portrayal of Bertie as King are reminiscent of that, he is also shown as the father who gets down on his knees to enact a bedtime story for his two young girls even though he is dressed to step out for dinner. We see him as a vulnerable human being who breaks down in tears in front of his wife when particularly stressed. And he is depicted as a man struggling with low self-esteem — not least because of his stammer — and his constant struggle against it, especially while maintaining the outwardly stiff, monarchial appearance required of British kings. It is a role that clearly demands versatility, which Firth has accomplished with class.

No less deserving of praise is Rush, and it is the teamwork between him and Firth that makes The King’s Speechthe excellent film that it is. The most powerful scene in the movie, perhaps, is the last one in which the king, aided by Lionel, addresses the nation — announcing to his subjects that Britain has entered the war (World War 2). He has to sound convincing and it is truly a speech fit for a king.