Revolutions are no longer just televised. As we speak, the wheels of history are roaring toward unprecedented shifts in the status quo that is drastically altering the world as we know it. As multitudes in Libya follow Egypt and Tunisia with the passionate cries of liberty and freedom from oppression, the world, glued to the TV and the Internet, can’t help wonder, what next? In Yemen, Bahrain and Algeria, movements are gathering momentum and catalysing change throughout the Middle East and North Africa, reminiscent of the Velvet Revolution when Communism fell in Eastern Europe. The monarchies and dictatorships that have characterised government in the MENA (Middle East and North Africa) region are now facing their biggest challenge yet — not from the west or the fragile swings of the bipolar world, but the collective, conscious will of their own people.

It was said in Louis XIV’s reign that when France sneezed, the rest of Europe caught a cold. The same could be said of the Middle East today. Arguably one of the most contentious hotspots in the world today, any dramatic shift in the Middle East’s fortunes ultimately triggers instability in the world economy with precarious shifts in international oil prices. While any movement toward democracy is progress that should be embraced, the implications of violence and uncertainty loom strong. Egypt has yet to display any concrete indications of coherent institutions guaranteeing the fruition of democracy. With control still with the army, it is a matter for posterity to decide how momentous or detrimental Mubarak’s departure will be.

The emergence of people’s power on the streets of Libya, after the fall of Ben Ali and Hosni Mubarak spell a tumultuous time for Muammar Gaddafi, the eccentric and flamboyantly dressed strongman who has dominated Libya for 41 years. The Libyans, long oppressed under a brutal police state with little economic or social amelioration, are not alone in their desire to see Gaddafi go. America has a long history of dispute with Gaddafi.

His role in bringing the African Union together has been overshadowed by his bizarre actions and statements in power.

Only recently with Libya’s cessation of its Atomic Weapons Programme and cooperation over the Lockerbie bombing had Gaddafi been considered “acceptable to remain,” provided he was no longer belligerent.

However, now the situation looks bleak for Africa’s longest-serving ruler. He appears to have lost the support of many of his long-time cronies, while the east of his country has spiralled into open rebellion. Internationally, the UNSC has unanimously imposed sanctions on Gaddafi, frozen his assets and referred him to the ICC (International Criminal Court). After four decades of power, if Gaddafi were to step down or be forcibly removed, who or what would replace him? 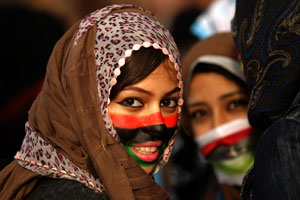 It is important to note that the real challenge never exists solely with removing a recalcitrant leader. It has happened numerous times in the past and will continue to occur as long as the obdurate and selfish nature of man prevails. Gaddafi’s defiant stance against his own people is but a temporary complication that will be eventually resolved. The real challenge is laying the seeds of successful democracy. Surrounded by authoritarian countries with no experience with democracy, the Libyans have a long road ahead of them. It is exciting to imagine the dawn of a new era sans Gaddafi, but one must be prudent and not too romantic. It is one thing to take to the streets and demand that the time of change is nigh. It is a very different matter altogether to ensure that institutions provide a stable, representative government with transparent politicians working in the peoples’ interest. Engaging social consciousness from an apathetic or ignorant society with little experience in political activity to a dynamic democracy requires time, effort and education. The events in Tunisia and Egypt were romantic and inspiring. But they were just a struggle. The real struggle of nation-building and mutual cooperation has only just begun. All these countries now embracing a changed tomorrow have a long road ahead of them. Becoming protesters overnight does not necessitate good governance. And often, we confuse protests and want of democracy with the capacity of effective rule.

As Pakistanis, we are familiar with the failings of democracy. True democracy has occurred twice in our short history. The first instance was orchestrated by a man who lost an election, but triumphed as a champion of the masses. He was eventually removed and hanged by a man in khaki. When true democracy returned again, it bought with it two inheritors who went back and forth playing politics like a see-saw with all of its carefree frivolity. Excessive ineptitude, corruption and inaction resulted in the jubilant return of another man in khaki. This should indicate how troublesome democracy can be if left fragile and immature. When people’s power re-emerged in Pakistan in 2007, the departure of the man in khaki bought back democracy as if it was a long-awaited blessing. One has yet to see its benefits. Democracy is easy to want, but not easy to implement. Substituting a dictatorship with a tenuous democracy sounds ideal, but it is perhaps not the best answer. The events in the Middle East and North Africa spell hope, but hope is not enough to alter the myopic nature of man.

Already termed the White Revolution, the movements convulsing the MENA region will have far reaching implications for the future. For one, the era of dictatorships and police states monopolising power may be a thing of the past. Jordan and Saudi Arabia are already attempting to appease their citizens. Jordan is mulling over constitutional monarchy, while Saudi Arabia is promising municipal elections which barely empower the people. But then again, as the champion of the Muslim world and bosom buddies with America, it would require a lot to irk King Abdullah into implementing change.

Despite the perception that the House of Saud is venal with a government that endorses gross human rights violations, the Americans will not prefer a replacement to the aging Saudi monarch or his myriad family members waiting in line for the throne. Sharing a 1,100 mile border with Bahrain, the Saudis would impugn a democratic regime to emerge in a fellow GCC country dominated by Shiites that could shift strategic ties to Ahmadinejad’s Iran or Assad’s Syria. As for Yemen, its location on Saudi Arabia’s southern flank will make the Saudis squeamish about anything that drastically affects the regional status quo. Should a spillover affect America’s greatest strategic regional ally, it will be a delicate balancing act for the Obama administration to manage between supporting democracy and human rights, or protecting the Saudi’s (and the petroleum economy’s) interests. 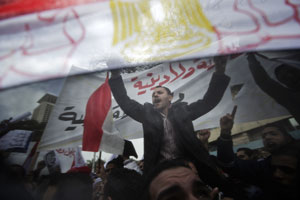 And yet, the revolution unfolds on our television screens threatening to change the faces of those leaders we have long grown familiar with. But these mini-revolutions only scratch the surface of the problem. Revolutions do not just affect political systems; they alter mindsets, ideologies and deeply affect the societal structure. Each major historic revolution has brought with it a drastic change of ideology and restructuring of society. The French Revolution abolished monarchy and aristocracy while the Russian Revolution replaced monarchy with Communism. The Iranian Revolution took it one step further and replaced the Shah with a theocracy. For the so-called White Revolution, to succeed, it is not just the leaders who have to go. Handing power to the people by passing on the means of production through societal development has to ensue in order for true progress to take root. Otherwise, it is merely reminiscent of another Uganda or Cambodia where Idi Amin or Pol Pot were removed but the ever lasting seeds for an effective polity were never planted.

In Libya, Egypt or Tunisia, an alleged revolution is not enough. As Gaddafi spurs his supporters for one last stand chanting, “The time of victory has come. Forward, forward, forward. Revolution, revolution,” his words could not be more prophetic. This revolution is not just limited to the streets, but people’s hearts and minds. Removing authoritarian regimes is just the first step. The revolution will never succeed unless awakened political consciousness empowers average citizens to vest their interests with that of the collective.

Yet, as now familiar images of the masses clamouring for change flood TV and news channels across a variety of media, one can’t help being moved by the beautiful and inspiring underdog struggle of the people against all odds. As thousands and thousands take to the streets at the peril of their lives, ensuring their rights, their voices and their dreams for posterity are recognised, make no mistake — the Revolution will not just be televised, it will be Live.