With an aging aircraft fleet, over-sized staff strength, poor on-flight services, alleged corruption and huge financial losses, the Pakistan International Airlines (PIA) now appears a shadow of its impressive past. From its lofty slogan “Great People to Fly With” to the present request to “Come, Fly With Us,” the national flag-carrier’s operations and management nosedived in recent years and it now struggles to remain afloat on the back of heavy government subsidies.

However, one of the severest blows to PIA’s operations and reputation came in the wake of a four-day workers’ protest and strike that began on February 8, over the planned handing over of some key international routes to Turkish Airlines under a code-sharing formula. The protest not only affected the airlines’ operation, with more than 400 international and domestic flights being cancelled, inflicting more than 250 million rupees of direct losses, but also resulted in the unceremonious ouster of managing director Aijaz Haroon, who had long been the target of workers’ wrath for pushing “unpopular” reforms and disciplinary measures.

The government, bowing down to the workers’ pressure, announced that it would scrap the planned code-sharing deal with Turkish Airlines and removed President Asif Ali Zardari’s hand-picked managing director, Haroon. In addition, PIA’s new management also moved fast to appease labour unions by accepting some of their controversial demands that included exempting union leaders from routine duties.

In an attempt to win staff support, the new managing director, Nadeem Khan Yousufzai, who like his predecessor is a pilot and a hand-picked man of President Zardari, promised concessions and facilities for workers, which the airline, in its present fragile position, appears unable to afford. The promises include easy house and car loans, allowances for employees’ weddings, children’s education and daily essentials from the state-run utility stores.

However, the labour’s seal of power at PIA is being seen as more ominous for the country’s economy as it has effectively sealed the fate of reforms at PIA, which suffered a staggering 67.31-billion-rupee loss during the last five years. The airline registered a loss of 11.69 billion rupees in the first nine months (to September 2010) compared with 10.77 billion during the same period a year ago.

A combination of factors, including unprofessional management, unrestrained trade union activism, political interference and corruption, have effectively blocked any hopes of a turnaround in the national airline’s fortunes where every effort at reform hits a dead end.

According to a former senior PIA official, the Turkish Airlines deal was a recipe to pull the airline out of the red. “PIA has been losing passengers to other airlines, especially the ones from the Middle East, because of its small network and lack of frequency to major world destinations,” said the former top official, (who asked not to be named). “The deal with Turkish Airlines would have given PIA that reach.” 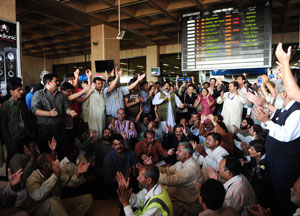 Labour power: Protests and strikes bring PIA, and travellers, to a halt in February 2011. Photo: AFP

For PIA, with its fleet of 40 aircraft — having an average age of 20 years each — and inability to induct new planes because of financial constraints, the deal with Turkish Airlines was an easy way to increase its reach to more than 100 destinations where it does not fly, he said.

PIA planned to surrender some of its prestigious, but less profitable, loss-making or less frequented routes including New York, Chicago, Barcelona, Amsterdam and Milan to Turkish Airlines, which had daily flights to these destinations against the national carrier’s once or twice a week flights. It would have helped PIA to cut operational costs and earn 20% commission on each of its tickets sold beyond Turkey, including destinations in Africa, South and North America and Europe where it does not operate flights. Under the proposed deal, PIA would have flown passengers to Istanbul and Turkish Airlines would have taken them to other cities from there.

It appeared an easy and a sure-shot way to increase PIA’s revenues and profits, but trade unions were only concerned with possible downsizing.

Suhail Baloch, president of Pakistan Airline Pilots’ Association (PALPA), says that PIA should not surrender its routes as getting them back in the future would be expensive and difficult. “We are not against code-sharing, but against giving routes to other airlines.”

“There are other ways to cut PIA losses and make it profitable,” he adds. “To start with, stop the leakages, which are worth two billion rupees every month; stop serving hot meals on domestic flights; stop giving newspapers, except during morning flights. But the former managing director never listened to us. He wanted a pocket union.”

But senior officials of the management say that the employees’ proposals hardly offer a proper solution to PIA’s current predicament. Instead, they blamed trade unions for many of the ills gripping the airline, where the ratio of employees per aircraft hovers at around 430 against the international standard of 200 to 225.

Yes, PIA remains hugely overstaffed with its strength of 22,000 employees — out of whom around 4,000 were regularised only recently by President Zardari. Earlier, in 2008, the government reinstated hundreds of sacked employees with full back benefits, burdening the airlines with unplanned expenses.

PIA insiders say that the number of employees remains three to four times higher than international standards. “For instance, internationally giving a clearance certificate to an aircraft is the responsibility of one engineer. In PIA, five engineers do this job, each clearing one particular operation of an aircraft. Haroon’s management wanted to end this and get more work done from under-performing employees,” says another senior official.

However, union leaders argue that PIA’s salary bill was around 16-18% of its expenses — really low compared to other international airlines which have a salary bill of 30-35%.

Baloch said that the salary bill was not a burden and PIA can afford to keep 22,000 employees in a country where joblessness remains rampant. But management officials argue that good professionals leave the organisation for good airlines and PIA remains stuck with a bulk of average and below average employees — most of whom are political appointees.

The former managing director’s efforts to use technology to run its systems including that of the crew management were also bitterly opposed by trade unions. “Despite the availability of a computerised system, crew management in PIA was done manually, which resulted in abuse of the system and out-of-turn assignments,” says the official. “There was a time when key flights to the US and Europe were being sold. There was a lot of corruption and only union-connected employees managed to get good flights. The implementation of the computerised programme stopped this, disturbing many of the crew and especially those affiliated with unions.”

PIA officials admit that irregularities and corruption increased in the national airlines following the lifting of the ban on trade unions in 2008. Unions tried to dictate and interfere in management work, officials allege. There was resistance to every move aimed at reform — from selecting hotels at foreign destinations to the ban on the use of business class seats — even on domestic routes, for PIA pilots and ground engineers, which came at the cost of losing revenue passengers, they add. Baloch challenges these allegations, saying that cases should be brought against those charged with corruption.

Scandals including the one in which employees were found selling staff emergency tickets to ordinary passengers and pocketing the money, and loopholes from procurement to the maintenance departments, and vested interests prevent any initiative which aims to stop the rot, PIA sources say. “There was even resistance when the management tried to get old employees to vacate women’s hostel rooms,” said the official.

Since the lifting of the ban on unions, PALPA has gone on a go-slow twice and carried out a full-fledged strike.

PIA appears to have become unmanageable because there are irregularities, corruption and nepotism at every level. Experts say that management has become a specialised and professional job and political appointees are not capable of doing that job. From the top management to the board of governors, there has been nepotism in appointments.

PIA’s existing board of governors includes a ginner from Multan, an artist, an owner of a foam manufacturing factory and a Lahore-based businessman. They have no experience in running an airline. Their only qualification is that they are friends of people in power.

No wonder the PIA lacks a proper marketing strategy. All thanks to their rickety old airplanes and many overweight and old cabin crew members who have been allowed to fly due to a controversial Supreme Court order. The future of the national carrier appears in the doldrums as the management and the government both remain reluctant to take tough and bitter decisions which are needed to change the fortunes of PIA.

This article was originally posted under the headline “Broken Wings” in the March 2011 issue of Newsline.