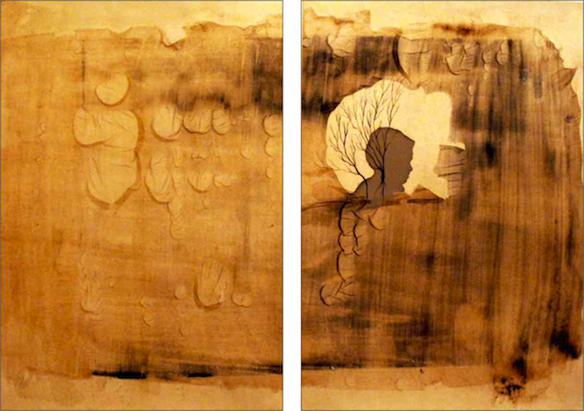 In her first solo exhibition, Alia Bilgrami explores the notion of displacement, articulating the feeling using symbols of places in which she has lived: there is the maple leaf from Montreal, where she was born; the map of Karachi, where she grew up; and the tulip from her current home in Islamabad. In this solo show, titled ‘Tulipmania,’ the tulip features as a metaphor as it was a symbol of love in the East: in both Persia and Turkey, and cultivated as early as 1000 AD. Much later, it was appropriated by Western Europe, including the Netherlands in the 17th Century, where it ostensibly turned into a symbol of capitalism as ‘Tulip mania’ spread all over the continent. This aspect of her work reflects how cultural differences affect the way we perceive and create symbols. She is interested in using the tulip more in her work because of the extensive hybridism that was involved in creating different varieties that were then bought, sold and fought over for exorbitant amounts. This lends it political connotations too — when particular natural or man-made resources are coveted to the extent that wars are waged to acquire them.

Currently the new work combines contemporary miniature painting, drawing and photography. Bilgrami earned a MFA from Central Saint Martins College of Art & Design in London in 2010 and before that a BFA from Indus Valley School of Art & Architecture in Karachi. Over the past two years, she has been experimenting with and trying to push the boundaries of contemporary miniature painting. In this exhibition, these works are meant to evoke a sense of belonging, or one of being scattered. The young artist admits that fragments from her own sense of dislocation are discernable but still says that her art “is open to interpretation.”