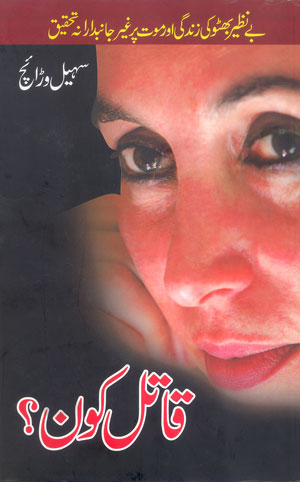 The title of Suhail Waraich’s seventh book is slightly misleading. Qatil Kaun is not just a magisterial investigation into Benazir Bhutto’s assassination, it’s also a celebration of her life, a lament for her cruel and untimely death and above all, a personal, deeply moving memoir of the author’s long association with Benazir Bhutto. As a political reporter, Wariach followed her career for more than a quarter of a century and interviewed her on- and off-the-record dozens of times.

As soon as casual readers see the title of this book, they will want to know who the murderer is — Zardari? Musharraf? CIA? Baitullah Mehsud? That man with the sunglasses seen taking aim at her in the TV footage? Depending on their political affiliation, people already seem to have made up their mind about who was responsible for her death. However, if you are genuinely curious, then reading this book will take you as close to the killers, their facilitators and protectors as you’re ever likely to get. Waraich methodically follows every single clue, every lead and traces the footsteps of all the potential killers. He comes up with a list of foot soldiers who carried out the actual attack, then tracks down their handlers among the maddeningly complex world of Pakistani militants. And he doesn’t stop there, he traces these jihadi godfathers’ handlers in the Pakistani intelligence agencies as well. At the end of it, we confront the frightening reality that all the main suspects have been killed. Suhail Waraich doesn’t give us any conspiracy theories, his investigation is based on official documents, forensic reports and personal interviews. Your head is likely to spin as you go through the huge cast of unlikely collaborators and see how our establishment is able to create an atmosphere in which not only our country’s most popular politician can be killed, but all the evidence can be wiped out with heinous efficiency.

Before he became a Geo TV celebrity with Aik Din Geo Kay Sath, Suhail Waraich was known for his encyclopedic knowledge of Punjab politics and his in-depth interviews with Pakistani politicians. Somehow, even the most reticent ones opened up to him and ended up shining a light on some forgotten episode of Pakistan’s secret political history. This book gives a clue about his technique. It’s quite simple and basically journalism 101. Once you ask a question, you should listen to the answer. You don’t need to be a historian, but you should make sure you give your reader some context. Try and keep your own prejudices in check; as a journalist you came to ask questions, not to boast that you already have all the answers.

Waraich is among the few political reporters who don’t hate politics and politicians nor pretend to love them. Many journalists who spend too much time around powerful people tend to become power junkies. In today’s TV talk era, many start believing that they are the powerbrokers; others actually start projecting their own half-baked biases as the people’s voice. In this age of unchecked demagoguery, Suhail Waraich has an old-fashioned deference for his subjects. But he is no sycophant. He never shies away from asking the tough question, but he is always polite. In Qatil Kaun, more than once, he asks Benazir Bhutto and her confidantes why she has the reputation of being stingy with money?

There are a number of touching insights into his relationship with Benazir: family problems are shared, political advice sought and given, lunches and snacks shared. There is a hilarious moment when, according to Waraich, he tries to do a Jeremy Paxman on Benazir — the aggressive, pit-bull style of journalism when you ask the same question repeatedly, not in the hope of getting an answer but to prove that the person you are interviewing is avoiding the question. Almost in tears, Benazir gives him a dressing down. Later, Waraich spends an anguished night trying to decide whether he should include the scolding in the piece that he is writing based on the interview.

His personal relationship with Benazir, his instinctive empathy with her politics might make the reader think that Waraich is a borderline jiyala. But they should remember that his last book, Ghaddar Kaun, was based on his series of interviews with Nawaz Sharif when he was in exile in Saudi Arabia. It was also a best-seller. There are few leading journalists in Pakistan who can claim to have that kind of access on both sides of Pakistan’s political divide.

The book is quite dazzling not just in its scope and size, but even in its design. In an old-fashioned kind of way when books were probably designed around the text rather than the other way round, the book is full of pull-outs, interviews and pictures never seen before. Pages can be unfolded to reveal FIRS, charts of a blow-by-blow account of the moments leading up to the assassination, and claims and counter-claims by competing factions within the PPP. Suhail Waraich gets independent handwriting experts to examine Benazir’s will as well.

Waraich’s investigative method in this book resembles the work of the foot-trackers who are called khojis in Punjab and are still employed in the rural areas to track down stolen cattle and solve other crimes. Having no administrative power, a khoji uses his local knowledge of the land and follows the criminal’s footsteps, leads the victims to the criminals’ hideout and his job ends there. In this book, Suhail Waraich leads us up to Benazir’s murderers’ doorsteps and then leaves us there to decide what we want to do with them.

Muhammad Ziauddin is one of the senior most journalists in Pakistan. His career in journalism spans over 50 years. He has been associated to Dawn, The News and Express Tribune. He regularly contributes to Newsline.