On March 2, Islamabad witnessed another murder — that of Shahbaz Bhatti, Federal Minister for Minority Affairs. Forty-three-year-old Bhatti, the only Christian minister in the cabinet, had received numerous death threats from religious fanatics in recent months. After the murder of Punjab Governor Salmaan Taseer, he was aware that his life too was at risk. “They will get me one day,” he told a foreign correspondent in Islamabad, two days prior to his assassination. Close friends advised Bhatti to leave Pakistan, but he wouldn’t hear of it, even though Taseer’s assassination hit him hard. He had lost a fellow traveller in his mission.

“There is little doubt that Bhatti was killed by the same elements that targeted governor Taseer,” says Group Captain (retd) Cecil Chaudhry, a Christian leader and national war hero. Throughout 2009, Bhatti fought passionately for the rights of minorities in Pakistan, saying, “My position [as minister] cannot alter my determination to pursue justice because I live for religious freedom and I am ready to die for this cause.”

Bhatti was allegedly killed by militants because he had been campaigning to bring changes in the controversial Blasphemy Law to minimise its misuse against innocent people, including Christians, Hindus, Ahmadis — and Muslims of all sects. During the past few months, the minister had received several threatening letters and messages from Islamic militants, warning him to stop campaigning against the Blasphemy Law. In an interview with the Christian Post, Bhatti revealed that he had received a call from a Taliban commander saying, “If you bring any changes in the Blasphemy Law or speak on the issue, you will be killed.”

The attack was carried out in the I-8/3 neighbourhood by a group of men in shalwar kameez with black shawls covering their faces. They ambushed the minister when he was proceeding to his office from a rented house where he lived with his mother and siblings. (According to one newspaper report, he was using his official residence as a smokescreen to protect himself from potential assassins). According to eyewitnesses, four men in a white Suzuki Mehran intercepted his car at around 10:50am, disembarked from it, and sprayed Bhatti with bullets. Police sources say, the gunmen had been waiting in a car at the corner of the street. The post-mortem report showed that Bhatti sustained 30 bullets and all his vital organs had collapsed. Bhatti’s driver Gul Sher was saved because he ducked when the assassins opened fire. Bhatti was driven to the nearby Al-Shifa Hospital by Gul Sher, where doctors pronounced him dead on arrival. 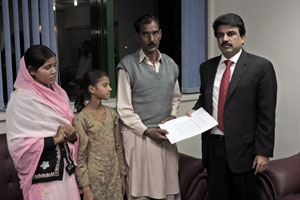 There was no security escort accompanying Bhatti when the attack was carried out. Reportedly, the two security patrolling vehicles, carrying police and FC personnel, had been directed by the minister to wait at his office. But in private conversations with journalists and diplomats, the late minister had expressed dissatisfaction over the security provided to him by the Islamabad police. Apparently, he had asked for greater security cover and a house in the ministers’ enclave — none of which was provided to him.

Suspected Islamic extremists from the Tehreek-i-Taliban Pakistan (TTP) reportedly left a pamphlet at the scene of the murder that sent out a chilling message: “All those who try to change Pakistan’s Blasphemy Law will be killed. We will not spare anybody involved in acts of blasphemy. With the blessings of Allah, the mujahideen will send each one of you to hell.” The pamphlet blamed the government for putting Bhatti, an “infidel Christian,” in charge of an unspecified committee that was tasked with examining the Blasphemy Law. Predictably enough, the prime minister publicly denied that any such committee had been constituted. Furthermore, he informed the religious leaders that the government had no intention of changing the Blasphemy Law.

Meanwhile, at least one police official was reported to have said that the style the pamphlets were written in and the manner in which they were distributed did not match the style of TTP and may have been an attempt to throw the investigators off track.

The identity of Bhatti’s killers remains unknown, but the Islamabad police have registered an FIR against four “unknown” persons on the complaint of his brother, Sikandar Bhatti. Police have also released the sketch of at least one of the alleged killers.

Bhatti was the second Pakistani Christian to hold the post of a federal minister. Before him, J. Salik had been inducted by the late Benazir Bhutto in her federal cabinet. Shahbaz Bhatti joined the Pakistan People’s Party (PPP) in 2002 and was elected member of the National Assembly on a reserved seat for minorities. He was appointed Federal Minister for Minority Affairs in 2008, and was also included in the downsized federal cabinet last month. Bhatti was the only Pakistani to receive the prestigious International Religious Freedom Award for rendering services to the Christian community. He boldly defended Aasiya Noreen (aka Aasiya Bibi), a Christian mother of four, sentenced to death for allegedly blaspheming against Prophet Muhammad (PBUH).

As news of Bhatti’s assassination spread, Christians and human rights activists held protest rallies and candlelight vigils against extremism and terrorism across the country. With both Bhatti and Taseer gone, the Christians now find themselves in an increasingly vulnerable position. “We feel bewildered and defenceless. We are living in a climate of fear. Who will fight for our rights,” says Peter Jacob, executive secretary of the National Commission on Justice and Peace, a human rights body of the Catholic Bishops’ Conference of Pakistan. “This country is now at the mercy of terrorists, who feel free to kill high-ranking personalities.”

In a joint statement, Archbishop Lawrence John Saldanha, chairperson of the Pakistan Catholic Bishops Conference, and Shahid Meraj, representative of the Church of Pakistan, remarked: “Bhatti’s assassination underscores the need to protect the lives and rights of religious minorities. We would like to appeal to the federal and provincial governments to wake up to the challenge of protecting the citizens of Pakistan. If the country becomes a killing field of democrats and liberal individuals, it would embolden all those criminals who are trying to take charge of the country.”

The Vatican also expressed outrage at the killing. In a statement, Vatican spokesman Federico Lombardi dubbed the murder of Bhatti as a “grave act of violence” which “demonstrates that the Pope’s consistent addresses regarding violence against Christians and religious freedom have been justified.” In Washington, Secretary of State Hillary Clinton called the assassination “an attack not only on one man but on the values of tolerance and respect for people of all faiths.”

Bhatti’s murder is another indicator of the growing intolerance in society. Extremist elements are gaining ground, while liberal voices are being stifled. Sarfraz Clement, a Christian social worker, laments the fact that “along with the assassins, some lawyers, journalists, political parties and state operatives are not only supporting and glorifying extremist groups, but are openly propagating hatred and intolerance among Pakistanis. They are equally culpable for Bhatti’s murder.”

Christian Church leaders argue that the government needs to go beyond the rhetoric of “minorities are enjoying all rights in the country” when they are not, and take practical steps to ensure that this is done.