October 20, 2009. It was a normal academic day for thousands of male and female students of International Islamic University, Islamabad (IIUI), at least until 3 p.m. when the calm and serene atmosphere of this prestigious institution was shattered by twin suicide bombings that killed six people, including three girls, and left dozens of others injured.

The government functionaries were quick to blame the Tehreek-i-Taliban Pakistan (TTP) for the attack with Interior Minister Rehman Malik saying once again, “All roads lead to South Waziristan.”

The twin bombings also prompted the closure of hundreds of schools and colleges throughout the country until October 25.

The assault on the university, an international seat of Islamic learning, shocked not only the Pakistani nation but also other Muslim states, which send hundreds of their youngsters every year to this institution for quality education in key educational fields ranging from Arabic language and Islamic civilisation, Shariah law and Islamic studies to basic and applied sciences, management sciences, languages, literature and the humanities.

With financial assistance extended by Saudi Arabia, the foundation of the Islamic University was laid on November 11, 1980. According to the university’s website, “The desire to produce scholars and practitioners, imbued with Islamic learning, character and personality, and capable to meet the economic, social, political and intellectual needs of modern times is the aim of this university.”

The IIUI campus, located on the outer edges of Islamabad in Sector H-10, is an impressive, spacious set of dark brick buildings and has more than 17,000 students, including 6,000 women and 2,000 foreign students — from 45 different countries — most of whom are from China and Africa.

The suicide blasts at the IIUI campus on October 20 occurred in quick succession in segregated blocks for girls and boys.

A bomber, who managed to reach the women’s section of the campus, was intercepted by a worker, Pervez Masih, when he tried to enter the girls’ cafeteria.

The bomber blew himself up at the gate and it is believed that if Masih had not stopped him, the death toll would have been much higher as at the time of the assault more than 50 students were having lunch at the cafeteria.

The other bomber, who according to the police was carrying around eight kilograms of explosives, blew himself up outside the office of the chairman of the Shariah department killing two persons. The blast also created a big hole in the office and cracked its wall.

Says Shaukat Ali, a student of Shariah law, “I was reading a book in a nearby ground when I heard a huge explosion. I rushed to the spot where I saw at least two dead bodies and pieces of flesh and blood all over. It was horrifying and it will haunt me forever. People were screaming and they were crying for help. First I decided to take refuge but then I changed my mind and helped move the bodies to the ambulances.”

Another student questions why his university was attacked. “Ours is an Islamic university and it has nothing to do with the secular norms and values despised by the Taliban, so why were our innocent friends killed? People from all over the world come to study here and a majority of them are from Muslim countries,” he says.

Stunned but not broken, the IIUI students staged a bold comeback by holding a protest demonstration against the terrorists on Monday, when the university was reopened. Said Dr Anwar Hussain Siddiqui, president of the Islamic University, “The terrorists could not shake our determination to spread knowledge or prevent us from discharging our responsibilities to save Pakistan by spreading the true spirit of Islam that advocates peace and harmony in society.”

Students and faculty members raised slogans against the surge in terrorism in the rally led by Dr Siddiqui and demanded that the government provide complete security to educational institutions.

Investigators firmly believe that the Waziristan-based militants were behind the attack. However, why an institution that has been sympathetic to the causes dear to the heart of the Muslim ummah and which had been supportive of the mujahideen in the days of jihad against the Soviet Union, was targeted, remains unclear.

“It’s not only a renowned Islamic institution today but its past is also well-known to many in this country and especially to those linked with jihadi organisations. We know and they [militants] know that there was a time when this university served the jihad against the Soviet Union,” says a security official involved in the investigation.

“The university’s students, back in those days, openly backed the cause of jihadis and some of them would hang portraits of Osama bin Laden and his other comrades in their hostel rooms,” he adds. 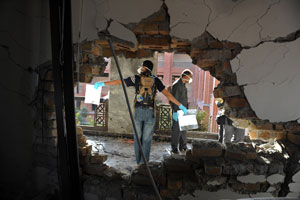 Renowned Muslim scholar, Al-Qaeda leader and Osama Bin Laden’s mentor, Abdullah Azzam, was also a lecturer at the university before the mujahideen waged an armed struggle against the Soviet invasion of Afghanistan back in 1979.

“Perhaps, the militants loathe the touch of modernity added to the ambience of the Islamic University in changing times or perhaps they feel angry over losing the support of thousands of its students to their cause,” says the security official.

Security analysts like Brigadier (retd.) Mahmood Shah believe that the militants have no love for a modern, updated interpretation of Islam, which is contrary to their strict understanding of faith.

“They have been attacking schools, mosques and religious institutions they believe to be working against the interests of their brand of religion; so the attack on the Islamic University should be seen in that perspective,” says Shah. “Many Islamic scholars in this country do not subscribe to the religious beliefs of the Taliban and Al-Qaeda, which is why they are being attacked and killed. While people in institutes like the Islamic University talk logically about religion, the Taliban talk illogically about religious matters which leads to a huge mismatch between the two views.”