Every age has a defining ideology and, in the present climate of shifting realities, it is the mantra of relativism that has hit fertile ground. A considerable amount of young art is centred on ideas relative to individuals, cultures, time periods and contexts. Chawkandi Art’s recent show, “Figure of Speech” by Abdullah Syed and Roohi Ahmed, expounds on current perceptions through a personalised vocabulary of symbols and metaphors that have relevance to the artists’ oeuvres yet are still open to viewer’s interpretation.

As an exhibition, “Figure of Speech” comprises a vast body of prints, embossed prints, objects and related material accumulated during the two artists’ residency at the Cicada Press, a research group within the School of Art at the College of Fine Arts (COFA), a faculty of the University of New South Wales in Sydney. Segmented into their work, the collection is threaded with symbols and references individually specific to both artists but which are later employed in a collaborative process as well. Initially, multiple articulations confuse the onlooker, but when examined in context, the contents spread into several strands of thoughts, conversations, views and musings that the artists had purported on the basis of new research or because of its linkage with their previous work. 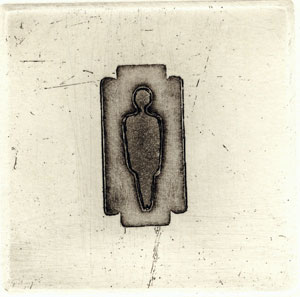 The needle image is synonymous with Roohi’s repertoire by now, as she has explored it at several levels and under various guises as a tool for inflicting pain and as an instrument for garnering divisive elements. In this show, her regimental grouping of needles surrounding the figure-and-leaf image invokes a hostile environment in which human life is under constraint and attack. Subsequent, exultant works like ‘Cascade’ and ‘Few Leaves on the Ground’ show the artist liberating herself from belligerent forces by identifying with pliant organic references. Myths and folklore associated with trees and the seasonal fall of leaves as symbols of renewal, rejuvenation and restoration support her quest for life-enhancing metaphors. This desire to reinvent herself within the comforting confines of nature rather than the rigid material world becomes more evident in works like, ‘Leave me Be’ and ‘Turning Over a New Leaf.’ These messages give voice to the feelings of a nation under siege as much as they speak for the human psyche under duress. The body and soul exploration is yet another area of investigation that has been manifest in Roohi’s work for quite some time and she carries this forward in her engagement with the leaf. She says, “The figure and the leaf are about the ephemeral nature of life and the similarity of the life force behind the two elements. It is also about the coming together of the two areas of my interest and establishing a link between the two. There is another kind of mapping happening here, which I am currently exploring.” 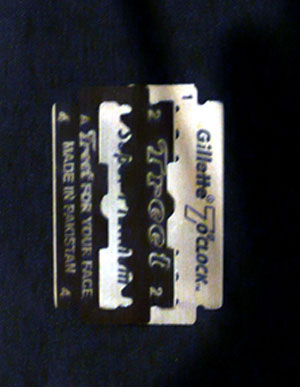 Abdullah Syed’s anchor piece, ‘The Buzzword’ is a portfolio of seven etchings evolved from the beehive grid. In the fine and applied arts, the lucid modular structure of the beehive had a considerable influence on the architects and artists who founded the Modern movement. But other than this, the beehive is also seen as a model for an ideal society, while honey and wax have provided the basis for countless positive metaphors of sweetness and productivity and Syed’s use of the grid conforms more to this cultural significance. Playing on the Islamic reference to the bee and its usage by the Muslim organisations as a symbol of struggle and martyrdom, and  to President Bush’s much publicised ‘Beehive theory,’ he has compiled a collection of seven buzzwords: ‘jihad,’ ‘fatwa,’ ‘war on terror,’ ‘axis of evil,’ ‘weapons of mass destruction,’ ‘Islamophobia’ and ‘us and them.’ Other than illustrating the power of words as agents of propaganda, the hexagonal etchings on paper contain a host of pictorial references/puzzles that allude to the misconceptions, disinformation and paranoia central to the ongoing conflict between the Muslim world in this region and the western super powers.

The hand-woven traditional prayer rug (evolving from an earlier paper sculpture, Flying Carpet series) is also patterned along the lines of what appears to be a linear modulation of the honeycomb grid. Technically, it is the necker cube lattice referencing the core Islamic geometric pattern of tessellation, which is based on the belief that Allah is the one and only and has an infinite presence. The pattern is therefore composed of multiples of one element, a point and a line. Regarding the imposition of the Kaaba motif, Abdullah points out that “The traditional image of the Kaaba (meaning cube) on the rug provides a focus for the person praying. However here, it acts as a spectacle, a focal point from where the design radiates and to where it converges back.” The prayer rug installation object is essentially meant to highlight the supremacy of the geometric grid as a Muslim invention first, and a component of modernist minimalism later — another pointer elucidating the nitty gritty of the east-west divide. 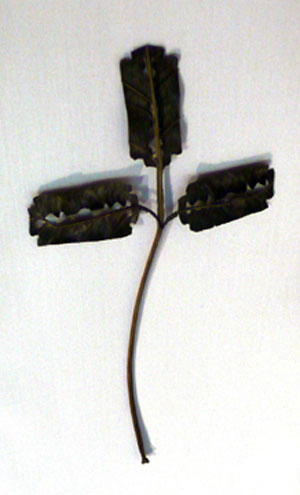 The beehive metaphor has most commonly been used by critics of Bush’s policies, and Syed’s silkscreen print ‘Hive,’ depicting a swarm of bees attacking a hive constructed of blades, implies how ineffective Bush has been in his bee-killing sprees. The blades variously used by the artist as an injury-causing implement and as a cleaning/shaving tool, in this print refers to the aggressors under assault from the victims.

In the collaborative works, the blade, cube and rug are juxtaposed with the leaf, body and needle image. An uneasy mix of the mechanical and the organic, the works are thought-provoking in some instances but their impact is diluted by the profuse and larger presence of individual art works.

Having established their credentials as educators and curators, Abdullah Syed and Roohi Ahmed are among the few young artists of Karachi who have the capacity to go beyond their personal art practice to contribute to the uplift of art in this city. Committed to a professional work ethos, their ideas are technically and conceptually researched (albeit, too intricately at times) and currently they are bracketed in the ‘artists to follow’ category, where their progress will be watched with interest.