From where do the Pakistani Taliban and other extremist groups get billions of rupees to bankroll their huge terror network, which has tentacles from the Khyber Pass to Karachi and from Chaman to Lahore? After all, billions of rupees are needed every year not only for weapons and ammunition, but also to pay the monthly salaries of thousands of fighters in the mountains and full-time operators in the major cities, including their food, shelter, clothes and even stipends to their families — if a militant dies in the line of terrorism.

Baitullah Mehsud, the former leader of Tehreek-i-Taliban Pakistan, alone, reportedly left more than Rs 3 billion worth assets in cash and kind, which also become a source of dispute among some of his followers. And we are talking about only one key commander. The highly decentralised networks of militant groups have more than one legal and illegal source for generating funds.

According to security officials, local and foreign Islamic charities, donations collected by Islamic seminaries and mosques affiliated or sympathetic to one militant group or the other remain the key source of income of these groups. Although the previous military-led government managed to remove the donation boxes kept in shops and main markets across the length and breadth of the country, the clandestine funding continues in the name of building mosques or helping the poor seminary students.

From the collection of hides of sacrificial animals during Eid-ul-Azha to the Islamic donations of zakat and fitra, the radical groups manage to divert a major chunk from all religious donations for themselves. Then there are those philanthropist Muslims — especially among the traders and business circles — who dole out huge amounts in cash and kind to such groups or individuals. Additionally, there are some leading politicians in Pakistan who have donated or purchased property for hard-line clerics in major cities. One of the beneficiaries of such largesse by a well known politician affiliated with the previous military-led government is none other than the family running Islamabad’s Lal Masjid.

There is no way to monitor or tap the flow of money coming through these seemingly innocent channels, which ends up in the coffers of the Taliban, Al-Qaeda sympathisers and other shadowy militant groups.

The Pakistani Taliban militants and their sympathisers also raise billions through smuggling narcotics, extortion and the illegal taxes they impose in areas they control. In the Swat region, before the army weeded out the terrorist network earlier this year, the Taliban earned up to Rs 260 million a year through the sale of narcotics.

But as the going got tough for these extremists in recent months, they went for a string of bank robberies and kidnappings to raise funds, declaring these acts as justified, say police and security analysts. 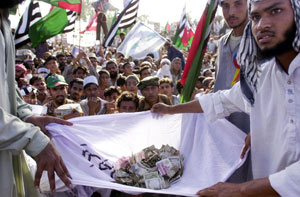 Under their controversial version of Islam, the Taliban authorised the looting of banks saying that their mode of business is against the teachings of Islam as it is based on “usury.” However, moderate Islamists say there is a difference between the usury prohibited under Islam and interest-based modern banking. However, Qari Hussain, the Taliban mastermind of suicide bombings in South Waziristan, issued the controversial edict of looting banks, saying that it was an “indirect form” of holy war, report security officials.

In the last year or so, the police have busted at least four major networks of the Taliban and arrested their sympathisers who were involved in several bank robberies and kidnappings in the commercial hub of Karachi.

Raja Omar Khattab, a senior superintendent of police, maintains that there are two types of operators engaged in fund-raising through criminal means. “One is directly linked to the Taliban while the other hails from the tribal regions. Several of them have been killed and arrested during the past few months,” says Khattab, who himself was wounded in a bomb attack masterminded by Taliban militants in Karachi on August 24, 2008, to avenge his successful operations against their companions.

Sharfuddin Memon, chief of the Citizen Police Liaison Committee (CPLC), says the Taliban have also masterminded some key kidnappings. “They target people who work with the US-led coalition in any way or those who are religious minorities, even Muslims belonging to a different sect,” he says.

Satish Anand, a noted Pakistani filmmaker, was kidnapped for ransom in October 2008 and was freed more than six months later after the payment of an undisclosed ransom in Islamabad.

Memon says that Kashmiri militant leader Ilyas Kashmiri masterminded Anand’s kidnapping along with two former army majors who have been arrested. Ilyas Kashmiri, who is affiliated with Harakatul Jihad-e-Islami fighting in Indian-administered Kashmir, has been reported killed in a US drone attack in September 2009.

But not all the victims are as lucky as Anand. Shaukat Afridi, who owned trucks carrying supplies for NATO troops in Afghanistan, was kidnapped in Karachi last year and was killed by his abductors when they were surrounded by the police. Three of the militants were also killed in the shootout in the low-income locality of Baldia Town that occurred in September 2008.

Memon says the police carried out the raid on a tip that terrorists had stored weapons in a small house and were not aware that Afridi was also being held there.

Kidnappers also operate in other cities, including Lahore and Peshawar. Security officials say that several victims win their freedom after paying millions of rupees ransom and they remain silent for the fear of their lives.

“These crimes were committed at the behest of the Taliban,” says Sehgal. In a huge city like Karachi, Taliban operators easily find safe houses and logistical support. “Many innocent people provide them shelter not knowing whether they are criminals or terrorists,” he adds.

According to the police, Islamic seminaries also provide safe hiding places for the Taliban who are on the run from the conflict area and those who want to operate in major cities to raise funds.

“This does not mean that all Islamic seminaries are involved in this or deliberately provide shelter to them … they are being misused,” says Khattab.

After the busting of four Taliban networks in Karachi, there has been a decline in bank robberies and kidnappings in recent months as the militants need time to regroup and reorganise.

Another apparent reason for them keeping a low profile in Karachi are the business and commercial stakes of the Pashtuns in this city. Taliban activity has the potential of sparking ethnic tensions — which leading Pashtun interest groups do not want. But the Taliban involvement in crimes to wage their unholy war remains a harsh reality. It should open the eyes of those religious parties who still think that the Taliban are friends of Islam.