After a successful showing of her work at the recently concluded Venice Biennale 2009, contemporary miniature artist Nusra Latif exhibits her new collection The Invisible Gun at Chawkandi Art in Karachi.

Part of the early group of NCA miniature art graduates who spearheaded the genre’s revival through experiment and deconstruction, Nusra Latif, a Melbourne-based artist for the past few years, continues to innovate within her chosen ambit of post-colonial critical discourse. Addressing current social, political and gender concerns through intelligent insertions of historical reference, she brings the same lively mix of the traditional and the contemporary to her technical application as well. Building her narrative with extracts of conventional miniature imagery, visual data of colonial India, organic (often ornamental) foliate pattern, silhouettes of figurative and animal forms and contemporary juxtapositions of flat colour tonalities, she opts for compositions that are open to several readings. 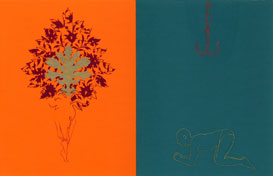 The current body of work, The Invisible Gun, conforms to her practice of using coded imagery to enticing brain-teaser effect, and the miniatures succeed in drawing in the viewer on the strength of their considerable visual appeal. Nowhere near as sinister as the title The Invisible Gun suggests, the paintings explore the colonial imbroglio through recourse to a gamut of familiar but diverse graphics emanating from the historical and cultural landscape of the region. Picture play of the lota, takht, armour and sword images invokes the history and current state of power politics in the ‘Rules of Warfare’ paintings, the ‘Regal Blessings’ and The Invisible Gun series. The boat and water indicators and the English Rose garden painting/drawing of Her Majesty’s regiment, reiterates colonial intervention and our subaltern status. If this is the premise of The Invisible Gun, then it is only partially addressed as the rest of the miniatures stray in other directions. 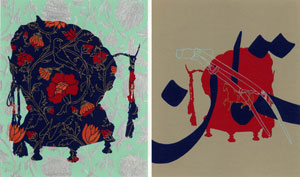 The use of decadent imagery is deliberate — it is visually attractive and connects with the traditional miniature but beyond that it is also a symbol of colonial baggage that has lost its essential value or purpose now that time has moved on. Paintings like ‘Some Old Things’ and ‘Shipping the Memories’ question the validity of objects that speak of another age. Having lost their efficacy, these remnants of the past can either survive as artifacts or be discarded altogether. The artist seems to be exploring sentiments of nostalgia and practicality from various aspects. Yet another set of paintings like ‘Shipping the Desirables,’ ‘A Very Subtle Pain’ and ‘A Thousand Summers’ appear autobiographical in nature. They speak of the diasporic existence, the pangs of dislocation and readjustment to a new set of rules and requirements. 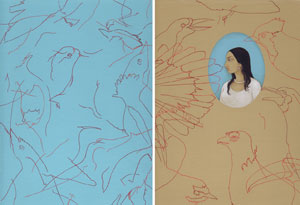 Technically, Latif uses a pictorial fragment from a Mughal or Rajput miniature as a starting point and then builds her composition, layer by layer, with contemporary art-making strategies. By far the most appealing of these ploys is the overlay of single-line drawing she spreads quietly around, over or alongside her disparate but finely worked pieces. The linear network has a conceptual reference and it also brings cohesion to the fragments. This is not a fine brush, miniature-induced line but a graphic art-inspired, thicker, uniform and plaint contouring executed with considerable ease and perked up with colour. The artist’s attractive chromatic choices and their flat, bland applications to optimise impact is another significant move towards contemporary art practice. Similarly, incorporation of other mixed-media devices like prints and collaged effects and minimal recourse to traditional miniature-making trace the gradual progression of her oeuvre away from detailed and specific references to relatively ambiguous and more abstract forms.

Exploring the traditions of Mughal miniature-painting and colonial imagery is common to most contemporary miniature painters, but Nusra Latif is among the few who have evolved a distinct signature. Defining her work motivations she states, “My presence as a woman, as an Asian, as a Muslim, as a migrant, as an ex-colonised, as a dark-skinned individual and as a painter determine the course of images I make.”