It’s kitschy, it’s catchy and the entertainment-starved Karachi audiences have lapped it up. But the fact remains that Made for Stage Productions’ second musical offering Mamma Mia didn’t quite have the oomph of their debut show Chicago. IfChicago was sassy, stylish and tongue-in-cheek, then Mamma Mia is its still-a-trifle-gauche-younger sibling.

The smash hit musical built around the music of the Swedish singing sensations ABBA, who ruled the music industry in the late ’70s and early ’80s with their easy-on-the-intellect lyrics and melodious tunes, is unabashedly lowbrow. The simple storyline, idyllic Greek island setting and happily-ever-after ending offers an unpretentious, escapist experience bathed in the warm, nostalgic glow of ABBA’s greatest hits.

However, the Karachi adaptation of this musical lacked some of the snap and sparkle that would have swept audiences away. The plot centres around a young girl, Sofia, who lives on an island getaway with her mother Donna. Sofia is about to get married to the love of her life, the stud appropriately named Skye. But while her mother is busy planning the wedding, Sofia has other plans afoot. Having read her mother’s diary, she discovers that she has three potential fathers and determined to find out which one is in fact her parent, she invites all three to her wedding. Mayhem obviously ensues when Donna is faced with three former paramours while her two best friends, a motley assortment of her employees and Skye and Sofia’s friends provide more riotous fun.

Perhaps the Sunday night show, which I attended, was the wrong night to pick since the cast had already completed a matinee performance earlier that day. The cast and musicians seemed to take a while to find their groove and the performances became much stronger in the second half of the show. Rachel Viccaji put in a consistent effort as Sofia but Kiran Chaudhry as Donna veered from just about adequate to extremely impressive. Kiran boasts weighty credentials; she is the lead singer of her own band and has been trained to sing by maestros like Ustad Fateh Ali Khan. Unfortunately, her rendition of the title song “Mamma Mia” was completely uninspired. She seemed to race through it and, for some reason, the director had her render the entire song standing in one place. There was no choreography and the actors remained static throughout this energetic number. With her powerful and unusual voice, however, Kiran redeemed herself in the second half of the show and came into her own with numbers like the gently reminiscent “Our Last Summer” and the sweeping “Winner Takes it All,” in which she modulated her voice impressively. The emotional “Slipping Through my Fingers,” sung while Donna helps her daughter get ready for the wedding, was also sensitively rendered and both Kiran and Rachel exuded an emotive energy to create a very touching scene.

Donna’s friends, who come to the island to attend the wedding, put in delightfully ditsy performances. Zoey Viccaji was a riot as the many-times-divorced Tanya, who can still pull in youthful admirers while dispensing tips on clothes and make-up. As for Sanam Saeed as Rosie, a no-nonsense, independent sort, her expressive voice, uninhibited body language and sheer stage presence made her stand out in this comparatively minor role. In fact, the interaction between the three friends and their star-spangled, retro performance to “Super Trooper” made for some of the most fun moments in the show.

Of the three potential dads, Akbar Merchant brought an endearing quality to the role of Harry Head Banger, while Saad Rahim Zubair used an Aussie accent to round out the outdoors type character of Bill. Aly Mustansir as Sam, Donna’s love interest, had the least quirky character which was perhaps why he played his role very straight and a bit flat. None of the three impressed in the singing department, however, but we must make allowances for the fact that they are, after all, amateur actors with day jobs. Omar Bilal Akhtar, who is also the music director of the show, was the only male actor who could break out into song with confidence as he is the lead singer of his own band and a professional musician. 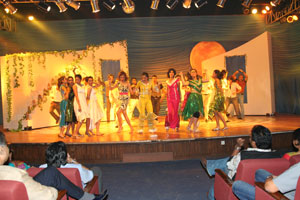 Director and choreographer Nida Butt had managed to rope in raw young dancing talent who did some impressive flips and cartwheels. Overall, the sultry island numbers were effectively choreographed and well executed, but a few weak dancers lowered the impact. It was also good to see Nida Butt strutting her stuff on stage in a couple of numbers, showing the rest of the cast how it is done. Her natural flair for dance, the training she has received and her passion for the art were all in evidence.

Special mention must be made of the innovative sets of Mamma Mia. The set managed to capture the quintessence of Greek island life with its whitewashed Mediterranean walls and bright blue trim. The designer had basically employed one large revolving background which was creatively manipulated and a few effective props were thrown in as the need arose.

One sour note was the fact that while tickets are sold with the understanding that seating is free depending on who gets there first, audiences showed up early only to find that the best seats in the house, comprising several rows, were reserved for the shows sponsors who strolled in minutes before the curtain went up. Considering that all the tickets cost the same amount of money, this was not just grossly unfair but an unprofessional move on the part of the organisers.

With Chicago, Made for Stage Productions raised the bar for theatre productions in Pakistan. They have only themselves to compete with and one hopes that they will take some constructive criticism to touch new heights in the future.