“Children are the purest form of human beings, they are so passionate; they’ll tell you exactly what they think”

Khaled Anam has an opinion on everything and he doesn’t shy away from speaking his mind. He is passionate about children and it is apparent throughout the interview. In fact, he is passionate about quite a few things: politics, music, parenting, environment, education and even dogs.

His new music album ‘Ray’ Say Rail Chali is geared towards children between the ages of five through 10. Abroad, children’s educational music and programming has been popular since the ’80s, just the way it was in Pakistan back in the day. However, after the likes of Sohail Rana, not much work has been carried out in this genre for a decade or so. Khaled, who has been at the forefront of children’s music and was even involved in the Urdu version of Sesame Street, called Open Sesame, has introduced his album hoping to bridge the gap between then and now. Here, Khaled Anam speaks to Newsline about his experience of working with children and why he prefers to work in this genre of music to others.

Q: You just came out with an album ‘Ray’ Say Rail Chalithat caters to children. What made you want to compose songs for children?

A: Nobody knows Urdu rhymes while everybody is familiar with the English alphabet and rhymes. It came as a shock to me when I realised that I, too, had forgotten my Urdu alphabet, as had my wife and children.

After Sohail Rana, Shoaib Hashmi, Nahid Niazi and Uncle Sargam in the programme Kaliyan, not much work has been done in this genre — and this, too, was back in the ’80s. Their music was extremely popular and their contribution to the field was phenomenal. And it pained me to think that it had stopped. When we were kids there was so much happening, but while our children are growing up there is nothing. Why?

I felt the need to create specific children’s music, keeping in mind their age. Music that would communicate our values and culture — not the stuff promoted by Star Plus or Hollywood. All the beautiful poetry by Allama Iqbal for children has been forgotten. That is a huge part of our culture and heritage, we should try to preserve it and make it known.

I have composed and written the music and songs on this album. It took me a few years to come out with it. I still have another 300-350 songs ready for a second album. I’ve collaborated with Afshan Ahmed and Beena Benjamin on ‘Ray’ Say Rail Chali and for the second one, I plan to have Alamgir sing a couple of the songs.

Q: What has been the response to your album?

A: I think, so far, it’s been pretty good. This is the first proper children’s music album after Sohail Rana’s. I recently attended the Society of Pakistan English Language Teacher (SPELT) conference where they were extremely taken by my album. Whatever little stock that EMI took with them, was sold in a jiffy and they [SPELT] said they wanted to distribute it to schools. We want the parents to be involved as well, because unless the parents know about it, it won’t make a difference. Parents have the buying power for kids so young. 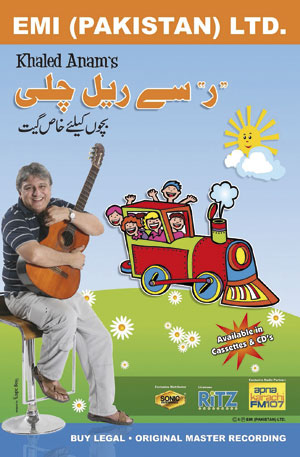 Q: Why have you, till now, focused only on TV shows for children?

A: Unfortunately, children’s programming has never been given a major slot on TV and for some reason this audience is also the most ignored demographic. The first job for all newcomers in the industry is to work on children’s programming, after which they move on to dramas, etc. Working with kids is considered to be unglamorous, almost like being a primary school teacher. No one pays much attention to the profession (and professionals) that build the foundation of the children’s character and personalities. Millions of rupees are spent on promoting songs that are, well, temporary and don’t help us in any way. We need to push multinationals and other major companies into sponsoring or promoting children’s programming. It’s a question of the future of the country and our children.

Q: What made you want to work with children?

A: Working with children has always been a passion. I took care of all my nieces and nephews, so I was really good around kids. And I realised children need their own space, some kind of a platform where they can be themselves. As a kid I used to hate how teachers would treat us: don’t make any noise, fingers on your lips, all that. Too much authority stunts their personality.

I have also produced music that was not for children, but it was not something I wanted to pursue; I wanted to concentrate on this demographic instead. When you leave this world, you have to leave behind a signature. Your work is your signature and I believe that it should be something substantial.

A: There was a lot of music in my house during the ’60s and I grew up listening to The Beatles, Cliff Richards, The Rolling Stones, Mehdi Hasan, Kishore Kumar, Lata Mangeshkar, Madam Noor Jehan …

On a trip to the UK, my dad brought back a double LP album of children’s songs, about 200 of them. I couldn’t get enough of those songs. I used to take a wire, stretch it over a wooden stick (use it as a guitar string) and play with it. I would hold a badminton racket to my ears and play with the different sounds the wire made. That was music for me. I think I’m a born musician.

Q: Has fatherhood changed your perspective on your music?

A: It has definitely given me more insight. Children are the purest form of human beings, they are so passionate; they’ll tell you exactly what they think, unlike adults who tend to be hypocrites or diplomatic.