“It was the severest hail of bullets I have been under in my career as a soldier. They seemed to come from all directions, intense and unending. It felt like being in the siege of a whole battalion.” This is how a colonel described the attack on the General Headquarters (GHQ) on October 10 by a band of 10 terrorists. Similar narratives are heard from those who have witnessed or have been caught in a string of daring terrorist attacks across Pakistan.

In multiple attacks in Lahore, including one on the Manawan elite police training academy, the audacity, if not the skill, of the terrorists matched that of those who had taken on the army’s citadel of power. Not much different was the successful hit-and-run killing of a brigadier and his driver who were taken out in broad daylight by a team that took barely three minutes to finish their deadly task and flee the scene of the crime. In case of the murder of Balochistan’s education minister, the precision of the hit was that of a consummate killer.

Investigators poring over the trail of evidence gleaned from these incidents agree that all the sleeper cells of the terrorists have been awakened, and while they involve different terrorism tactics types of terrorism — suicide squads, death squads, snipers, Improvised Explosive Device (IEDs) specialists, mass car bombers — they all appear to be coordinating their efforts and sharing information.

“We believe that while different in nature, the terrorist activity has a pattern that we cannot ignore: accuracy of information, detailed nature of the plan of action, selection of the time of strike, motivation of the executors and the communication support system, both at the spot and remotely, has striking similarities. Even if they are not getting directions from a single source, their handlers certainly are coordinating notes and helping each other out,” says a senior intelligence official deputed to look at linkages among diverse organisations across Pakistan. 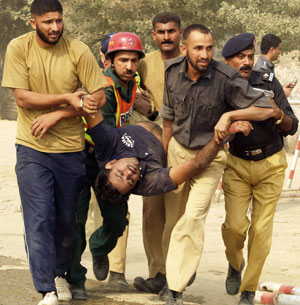 But clearly not every target is of the same value. Just like the army’s hunt for high-value targets, the terrorists too have their list of priorities. For them, hitting the GHQ was the equivalent of knocking out Baitullah Mehsud. And if they were able to hold hostage one or two top generals (who by some accounts were sitting a stone’s throw away, including the Chief of Army Staff General Ashfaq Pervaiz Kayani), that would have approximated the government’s yet-to-be-achieved aim of capturing Ayman al-Zawahiri.

“Not all of these operations have the same purpose. Target killings, slaying of police officials and suicide attacks at checkposts are meant to weaken the resolve of organisations that form the softer tier of state authority. Hits against military officials and bombs in public places are meant to spread fear in homes and generate family pressure. The most important aim is to prove that a nuclear-armed country and its custodian force, the army, has a bleeding underbelly, and there is nothing it can do about it,” says a top-ranking military official in the NWFP.

If that is the aim of the terrorists, they haven’t done so badly in pursuit of their objective. The suicide attack on the checkpost at Kamra, at the entry-point of the country’s prestigious Pakistan Aeronautical Complex, a strategic military asset, got global tongues wagging about the next likely target: Pakistan’s nuclear installation. In the wake of the attack, Indians lost no time to refer to the vulnerability of Pakistan’s nuclear installations. The remarks were strongly rebutted by the spokesman of the Pakistan Foreign Office, but the damage was already done. Pakistan seems to be losing the battle of perceptions that the terrorists are waging about the crumbling of the internal ring of the country’s security. 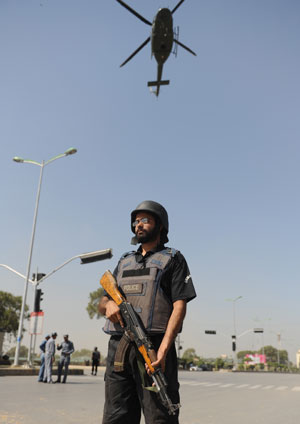 Intelligence reviews of the events of the past one month also suggest a frightening pattern of intelligence lapses and administrative failures. The possibility of an attack on the GHQ was debated in the columns of newspapers long before it took place. In the files of security agencies, some assessments had marked the probability of the attack as “high.” At least one memo called it “imminent.” But these warnings did not translate into adequate action.

“We are closely studying the melting away of the first ring of protection and how certain checkposts became ‘cold’ and did not adequately engage the attackers. Apparently, one of the snipers positioned at the top of a building on the inner circle, too, did not respond. It was a close call and we cannot afford another one,” says an army official who has access to the Terms of Reference of the ongoing investigation into the embarrassing incident.

In less spectacular incidents, the inability of the security agencies to pre-empt and anticipate terrorist activities is just as stunning. The Manawan Police Academy hit, while handled well by the forces deployed at the location, was planned and carried out without any advance and informed warning preceding it.

A Lahore-based intelligence official explains this omission in some detail: “It is not that we are not getting enough intelligence reports. There are dozens of them every day. Even as I speak to you, there are three sitting on my desk. But the problem is that these are too general and give broad time frames: a week, 10 days, sometimes even longer. We cannot lay security rings around potential targets for this long. We don’t have the number of forces to mark and protect each post,” he says, frankly admitting that there were just not enough resources in the kitty to take extra security measures.

Resource crunch makes even timely intelligence ineffective. This is what is happening in the NWFP, a province devastated by multiple terrorist attacks, each deadlier than the other. The latest one, in the busy Meena Bazaar, one kilometre away from the houses of the governor and chief minister, houses of the corps headquarters, and the formidable headquarters of the Frontier Corps, had been on the intelligence radar screen for some time. But in the end, a young man was able to park an explosives-laden vehicle at the cross-section of four streets bustling with women and children. The blast produced Peshawar’s worst calamity: 120 dead and over 250 injured. The locals call the event qayamat, the day their world ended. 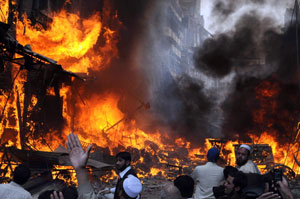 “We have intercepts that prove that this attack has links with South Waziristan militants, who are now bringing the war to the cities hitting innocent people, women and children to incite the public against this operation,” says an intelligence source in Peshawar. These accounts do not tally with what intelligence and security sources in Islamabad are saying.

Asked whether such charges have been brought before US administration officials and the government of Afghanistan, he answers, “Not recently. In the past, only once President Karzai was confronted with this type of evidence [with regard to previous incidents] and he did not know where to look.”

The range of suspects drilling holes in Pakistan’s internal security perimeter is bewildering. From Al-Qaeda leaders to Central Asian thugs to Arab militants, Baitullah Mehsud’s men to sectarian terrorists and jilted Kashmiri fighters to hardened criminals — the list is exhaustive.

“We hope to cut off their links with each other by destroying their sanctuaries and this is what the South Waziristan operation is all about. The attack on GHQ was planned and rehearsed, and it went through several phases of approval and counter-checking before being put in action. We believe that this was all done in Waziristan and we will deliver them a knockout punch there,” he adds. 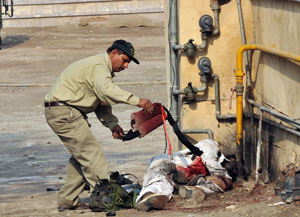 This determination is laudable, but it is not enough to deter the terrorists or their international backers from causing mayhem in mainland Pakistan. Security officials seem to be caught in two minds whether or not to play up the foreign hand factor. Security officials cite several reasons for this confusion. “We are observing restraint in our reaction. We have the capability to retaliate [against foreign forces destabilising Pakistan], and at another time we would have, but now when foreign interests would want us to be further cornered and declared the source of all regional trouble, it is best to play down [their involvement in Pakistan],” says a high-ranking military official.

The other reason for not raising the issue of export of terror inside Pakistan is the apprehension that this might distract national focus from the operation in Waziristan. For now it helps the ongoing military campaign to keep the pressure on the Mehsud-area-based Tehreek-i-Taliban Pakistan by channeling public anger towards the enemy within.

This strategy hinges on the assumption that the people will take the rising cost of this war in their stride and that the nation will continue to bite its upper lip even as heaps of dead bodies grow all across the country. The assumption will only remain tenable if the spiral of urban terror begins to come down. But if schools stay shut, business remains sceptical and civilian leaders are unable to keep the public morale high, repeated terrorist attacks could sink national mood into the depths of despair. Achievements in the highlands of South Waziristan, carefully released through controlled cameras, are not enough to counter the impact of urban terror landing at the people’s doorsteps. Every time terrorists succeed in the cities, the battle in Waziristan looks that much more remote and, for some even purposeless. This is the weakest link in Pakistan’s war against internal terrorists; something which the enemy knows all too well.

Related article from the November cover story: The Long Haul.