It’s a cliquish society that we live in. Art patrons, buyers and enthusiasts generally belong to the well-heeled circle. Once artists are absorbed into this coterie, their art is more than just self-expression. The creative artist will be caught up in a whirlwind of fame and fortune, and gifted the glamourous life of a celebrity.

Amid the blur of activity in Karachi, you can glimpse artists of a different kind. Travelling through the heart of this metropolis, your eye may stop at a handful of artists who work by the roadsides in their preferred spots along the heavily-trafficked thoroughfares. You may observe them as perhaps a feature that adds to the quaint landscape of old Saddar. But as they sit by the road day in and day out, engrossed in their work, they are comfortably distanced from the wheeling and dealing of art agencies and galleries, nearly oblivious to the commercial rat race and even to the deafening city din. 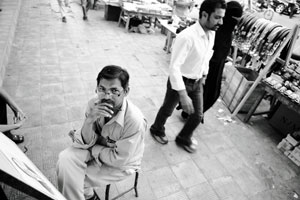 Khalid Shaikh, hailing from Sukkur, is one such artist. He sits outside Chotani Jewellers on Zaibunnisa Street. His open-air studio reflects the organised mess of an artist: scattered around his easel are portraits of all sizes in piles that are propped against the wall and a bunch of photographs clipped together. He is immersed in his work — a 20Ã—28 portrait on canvas, in pencil — when I interrupt him for a chat. Portraits are the forte of artists like Khalid. They generally have customers who bring them photographs of family members, girlfriends and boyfriends to sketch a likeness, which they keep as mementos for themselves or gift to their loved ones.

Khalid has had a keen interest in painting and drawing since childhood and single-mindedly followed his heart in pursuing his interest. When there’s a will, there’s a way, he believes. He set up his easel by the roadside first on Tariq Road for a brief period and then moved to his current spot on Zaibunissa Street about 32 years ago. The appreciation he receives for his work is what keeps him going, he says, as he is devoted to his art. Fate led him to find art virtuosos whom he could learn from: such as Eqbal Mehdi and Mohammad Rustom. He did not receive formal training but instead it was ‘dostani shagirdi’ in the presence of these esteemed artists that honed his skills.

Further down the road from Khalid, sits Ashraf Sahab. An elderly man, who sits absorbed in his work, spectacles perched on the bridge of his nose, utterly oblivious to the wailing sirens and cacophony of sounds that plays out on Saddar’s roads. Painting was an interest for him since sixth grade and ultimately turned out to be more than just a hobby. Hailing from Mirpurkhas, Ashraf’s affinity for art grew to the extent that he left school and taught himself to draw and paint. He moved through many jobs, including sign boarding, operator and factory work, but in 1980, he finally heeded what he believes to be his calling and settled on becoming an artist, setting up his work in Bohri Bazaar.

His spot was nearly cosy — at the risk of sounding incongruous — as he had chosen a nook outside a luxury watch boutique opposite Kashmir Emporium, which had a window display wall, skirted with a marbled, low ledge, making for a good makeshift bench. On this bench were Ashraf’s painting materials, pencils and brushes, and on the adjacent wall hung portraits by the artist in various media, from charcoal to oil, of familiar celebrities.

An influential teacher for Ashraf was Mohammad Rustom, who had a studio opposite the Parsi temple in the ’80s. Ashraf’s visits to the studio were the educational training that strengthened his painterly skills. His other teacher was a man known as Khalid Ustad. 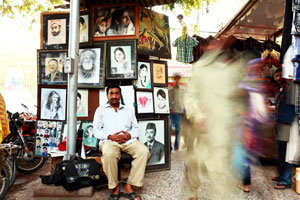 At the corner of the city’s famous Zainab Market sits Mohammed Zaffarullah. Of all the street artists in Saddar, he has the largest number of works on display under an old, gnarled tree that stands at the curb of the road. Unlike Ashraf and Khalid Sheikh, Zaffar graduated from the Government College of Lahore in 1983. Four years later, he decided on a change of scene and moved to Karachi to see how his art would fare in the metropolis. He tries to keep up with what is happening on the art scene internationally through any magazines and books that he can find and constantly strives to evolve his work through creative experimentation.

I broach the money-making aspect of their profession with a preconceived notion: each of them would repeat the woes of not making ends meet in this time of staggering inflation and inadequate earnings. I am moved to find that these artists reflect the old-fashioned image of the artist thriving on his passion rather than the cash it earns him.

They are all surprisingly at peace with themselves in the profession they have chosen, what it earns, and even their status in the art world. “This is what we worship,” say Khalid and Zaffar. Their conversation, in fact, reveals a spiritual inclination in their understanding of life. Khalid believes, “You naturally grow towards what you love most in life. God keeps showing you the roads that lead to it.” He gives the example of the incident that led to Eqbal Mehdi taking him under his wings. Khalid had learnt of Mehdi and tried to visit the great artist in order to express his reverence for him and to learn a few tricks from him if possible. He was barred entrance from his house twice. Then his work caught the eye of the wife of then IG Sindh, Aftab Nabi. She asked him whether he had made any oil paintings; he hadn’t but he told her how much he desired to learn. Khalid’s patron came back a day later and informed him that she had spoken to Eqbal Mehdi who had agreed to teach Khalid oil painting. From that day Khalid was ushered into the Mehdi house.

Ashraf reminisces of the old times when foreign visitors flocked to Karachi and he and other roadside artists had many customers. Ashraf says Arab sheikhs comprised the largest number of customers as many would come down to Karachi for business. He recalls being handed tons of photographs by the Middle Eastern tourists and given two months’ time to make their portraits. But that was then and in his words, “phir tou Kalashnikov aur heroin ne zamana badal diya, aur ab dhamakon ne.” These days, he says, galleries are more the rage and attract art lovers. “The ‘dish’ families go to art galleries, and you hardly ever see any foreign tourists on the streets.” The dwindling number of visiting foreigners has certainly affected business.

Zaffar adds, “Our country loves art but is too poor to invest in it or promote it.” Khalid, meanwhile has a different view. He says people in Pakistan just don’t understand art, therefore artists like him are not promoted as much as they can be. In a foreign land, he feels, there is more appreciation of all sorts of creative arts, even if it is occurring by the roadside.

But these artists have shown steadfast loyalty to their creative work despite the changing times. Why have none of them thought of switching to something more lucrative? They work on an order basis, charging minimal prices, ranging from Rs 1,000-6,000, for portraits. As Zaffar puts it, “Jo naseeb main hai, woh maalik ne dena hai.”

Like Khalid, Ashraf hopes his pictures can one day make it to the galleries and receive the recognition of art buyers. Zaffar has already had a couple of his paintings sold through a gallery, but he prefers to cater to the passersby who stop by his makeshift studio at Zainab market. His involvement and interaction with people coming and going every day inspires and energises him. Their “silent appreciation” encourages him and he is able to enrich his portraits with the various expressions he notes on the faces that pass him by. “I take pleasure in the fact that my work provides happiness to others.”