Bomb blasts occurred frequently in Balochistan in the days leading up to May 11, raising fears that elections may not be held in the province at all. However, despite all odds, voting did take place and while the turnout was a record low, there were relatively few casualties, dispelling the fear that these would be the bloodiest elections in the province’s history.

All the nationalist political parties, except for the Balochistan National Party-Mengal (BNP-M), scored well and clinched a considerable number of seats, thereby enabling them to position senior parliamentarian Dr Abdul Malik Baloch of the National Party (NP) in the race for the position of Chief Minister. Pakhtunkhawa Milli Awami Party’s (PkMAP) Mahmood Khan Achakzai himself nominated Dr Baloch as CM to PML-N’s Shahbaz Sharif on the latter’s visit to Quetta to discuss the formation of a coalition government.

Even though the PML-N enjoys a majority in the Balochistan Assembly, party leader and Prime Minister-elect Mian Nawaz Sharif too nominated Dr Abdul Malik Baloch to head the three-party ruling coalition in the province. PML-N heavyweights Sardar Sanaullah Zehri and Nawabzada Changez Marri had been wrestling with each other for the top post, but Nawaz Sharif went ahead and nominated the Baloch nationalist, thereby winning the hearts and minds of the Baloch people and hopefully paving the path for peace and development in the trouble-stricken province. During deliberations on CM nominations, Zehri, PML-N’s provincial president, and Marri, the party’s provincial general secretary, gave each other stiff competition for the position. However, in doing so they shot themselves in the foot as the PML-N central leadership used the in-fighting as an excuse to forward the name of a non-PML-N leader.

The party contends that for a strong and enduring coalition government, as well as to show genuine political leadership on Balochistan-related issues, it is necessary to let nationalists form the government with support from the PML-N. Nawaz Sharif not only proved his generosity by surrendering the CM post to the National Party but took it one step further by granting governorship to the PkMAP. Now in return, both NP and PkMAP have to demonstrate the same spirit the PML-N leader exhibited, by accommodating PML-N members in the cabinet. If they do so, the present tripartite government may last long. But if they don’t, the lack of PML-N representatives in the cabinet may cause the party to have a change of heart and they may even retract their nomination. 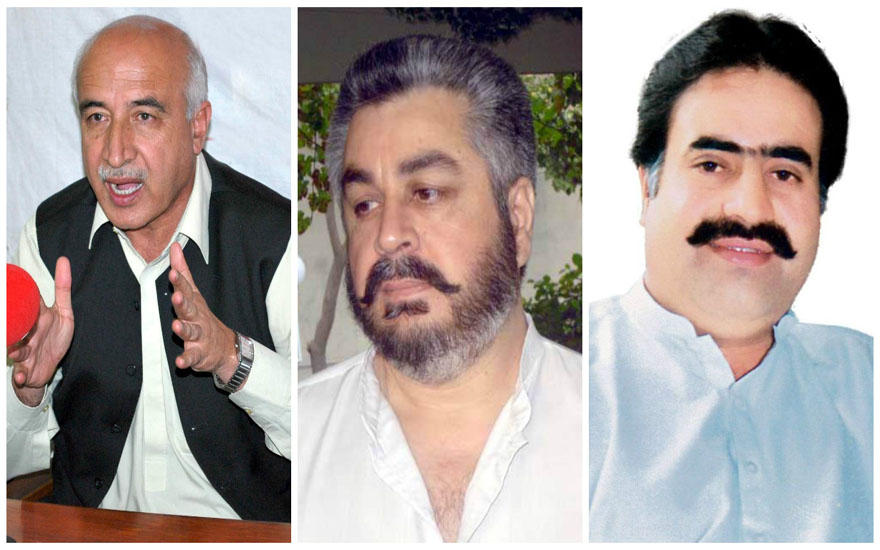 Even though the PML-N enjoys a majority in the Balochistan Assembly, Prime Minister-elect Nawaz Sharif nominated National Party’s Dr Abdul Malik Baloch to head the three-party ruling coalition in the province. PML-N heavyweights Sardar Sanaullah Zehri and Nawabzada Changez Marri had been wrestling with each other for the top post, but Nawaz Sharif went ahead and nominated the Baloch nationalist, thereby winning the hearts and minds of the Baloch people.

“We expected to get the chief minister’s post as we were in the majority, but our party leader gave it to the National Party. We then thought PML-N should have governorship in Balochistan, but again the office went to PkMAP. In order to accommodate the PML-N, who are in the majority, the offices of speaker, deputy speaker, senior minister and other important portfolios such as power and development, finance, education, health etc. should be given to it,” said Nawabzada Lashkari Raisani, a PML-N leader.

A university professor, who spoke on the condition of anonymity, added “By nominating a Baloch national, Nawaz Sharif wants to give a message to the Baloch people that he is sincere to resolve the Balochistan problems by giving authority to one of their own. And if he (Dr Malik) fails, PML-N and Punjab should not be blamed.”

Initially, PkMAP had emerged as the largest group after the elections by obtaining 10 out of a total of 51 Balochistan Assembly (BA) seats, and three out of a total of 14 seats in the National Assembly (NA). However, PML-N, which got nine BA seats and one NA seat, went on to assume majority in Balochistan after being joined by five independents and getting four reserved seats, thereby raising its number from nine seats to 18. However, PML-N did lose one seat when MPA-elect Ghafoor Lahri was disqualified by the Supreme Court in a fake degree case. In the NA, it has a total of seven seats after four independents, including former prime minister Mir Zafarullah Jamali, joined the party and it was allotted two seats from the reserved seats for women and minorities.

After the two-day meeting of their central committee on June 2 and 3, Mengal said that the party has decided to consult all their district level workers on whether their newly-elected representatives should resign or join parliament. The consultation process will take 26 days and the announcement will be made on June 30.
“We have participated in the elections in wake of the assurances by political forces, particularly PML-N, that we would be allowed to play our political role freely. However, we have irrefutable evidence that intelligence agencies turned our victory into a defeat in order to keep us out of parliament,” party chief Sardar Akhtar Mengal told Newsline.

Even though the PML-N enjoys a majority in the Balochistan Assembly, Prime Minister-elect Nawaz Sharif nominated National Party’s Dr Abdul Malik Baloch to head the three-party ruling coalition in the province. PML-N heavyweights Sardar Sanaullah Zehri and Nawabzada Changez Marri had been wrestling with each other for the top post, but Nawaz Sharif went ahead and nominated the Baloch nationalist, thereby winning the hearts and minds of the Baloch people.

The National Party, led by Dr Abdul Malik Baloch, is going to head the ruling coalition in Balochistan, vowing to provide the people of the province with rule of law, good governance and a corruption-free coalition government. It is the first time a middle-class politician will lead a government mainly comprising nationalists, which negates the perception that only an individual with a strong tribal background can rule the troubled province — majority of which is still under tribal influence. PML-N’s Zehri, who had his eyes set on the chief minister post, can do little now but accept the nomination of Baloch.

The major challenges facing the ruling coalition include recovering the thousands of missing Baloch persons and preventing further abductions; putting a stop to target killings, particularly of the Hazara/Shia community; providing an effective and corruption-free governance; and ensuring the proper use of development funds. The outgoing Nawab Aslam Raisani-led PPP government, although enjoying complete support of the federal government, completely disregarded such public issues. Out of 65 total members, it had 58 members of its own coalition in the provincial cabinet, and it distributed Rs 30-36 billion annually among the 65 members, including the speaker — a massive theft of public funds.

Jamiat Ulema-i-Islam-Fazl, which has always had nine MPAs in government since 1988 except for the 36-month tenure of Nawab Zulfiqar Ali Magsi, might not even be included in the coalition this time. Both NP and the PkMAP, who are the biggest political rivals of JUI-F, insist on keeping the Jamiat out of the government by terming it the root cause of all the ill-practices during previous governments. The two major ruling parties have also convinced PML-N not to include Jamiat if a durable ruling coalition is to be formed in Balochistan. PML-N has already offered JUI-F to join its government in the centre, but the latter is said to be demanding a part in the provincial coalition as well.

As in other parts of the country, some political parties are staging protests against the elections in Balochistan, calling them fraudulent. The parties who believe the elections were rigged include Jamiat Ulema-i-Islam-Ideological (JUI-I), BNP-M, Hazara Democratic Party, Pakistan Tehreek-e-Insaf and Ahle Sunnat Wal Jamaat. Most of them question the PkMAP bagging 10 seats in the provincial assembly, especially since the party won only four seats in the 2002 elections.

“How is it possible that PkMAP candidates were declared successful even from Baloch-dominated areas such as Quetta-Chaghai? How can this be acceptable to the local people?” asked JUI-F candidate Hafiz Hamdullah.

According to data provided by the Election Commission of Pakistan, the overall voter turnout was around 43% in Balochistan. The lowest turnout, 1.16%, was recorded in the restive Awaran District, where the winning candidate Mir Abdul Quddus Bizenjo of PML-Q polled only 544 votes out of the total 54,109 registered voters, while the runner-up candidate, Mir Ali Haider (NP), got only 96 votes. The highest turnout, 66%, was observed in the Barkhan District, where JUI-F’s Sardar Abdur Rahman Khaithran won 16,941 votes from a pool of 49,123 registered voters. For PB-50, the winning PML-N candidate Akbar Askani received 1,385 votes out of 92,485 registered voters against his immediate rival Akram Dashti of NP who polled 1,369. Rahmat Ali of the NP was declared winner with 2,073 out of 41,310 registered voters. In NA-271, PML-N’s General (R) Abdul Qadir Baloch won with 7,388 out of 124,457 registered voters. In the Makran region the turnout was approximately 12% while in central Balochistan (Mastung, Kalat, Khuzdar) it was 20- 22%. Eastern Balochistan — Kohlu, Dera Bugti, Barkhan, Naseerabad, Jaffarabad, Sibi, Jhal Magsi and Bolan — only fared slightly better with a turnout of 28-30%.

The separatist groups, however, are not ready to accept the ECP figures and they assert that the Baloch population did not participate in the elections since it was actually aimed at hampering the Baloch struggle for independence. According to them, the turnout was under 5%.

“To cover up its failure in getting the Baloch population to vote and to legitimise the election results, the state of Pakistan showed a 43% turnout to the rest of the world,” said Khalil Baloch, a central leader of the Baloch National Front.

In a bid to frighten people out of voting, the separatist groups and militant organisations blew up polling stations, attacked election offices/rallies and staged a three-day strike from May 9 to 11.
“The state organisations succeeded in conducting elections at all costs while the Baloch militant groups succeeded in ensuring a low voter turnout, thereby both proved their capabilities,” summed up a senior journalist, who spoke on the condition of anonymity.