Such was the impact of the Pakistan Tehreek-e-Insaf’s spectacular victory in the May 11 general elections in Khyber Pakhtoonkhwa that its strength in the new 124-member provincial assembly, jumped from zero in the previous elections to 55 seats this year.

The gap between PTI and the second placed Pakistan Muslim League-Nawaz (PML-N) was significant, with the latter managing to win only 17 seats in the provincial assembly.

PTI won 17 of the 35 National Assembly seats from Khyber Pakhtoonkhwa (KP) and also won one out of the 12 seats in the National Assembly from the Federally Administered Tribal Areas (FATA), where political parties were allowed to field candidates and operate legally for the first time since Pakistan’s independence.

The PTI’s ‘tsunami’ inflicted damage on every political party in the province, though the Awami National Party (ANP) and Pakistan People’s Party (PPP) suffered more than the others. The ANP in particular faced its worst ever defeat, winning one meagre seat in the National Assembly out of 35, whereas in the 2008 general election, it had won 10 NA seats. In the Khyber Pakhtoonkhwa Assembly, ANP managed to only secure four seats compared to the 31 elected seats it had won in the previous legislature. It also failed to win any seat in FATA and Sindh and managed to secure just one provincial seat in Balochistan. 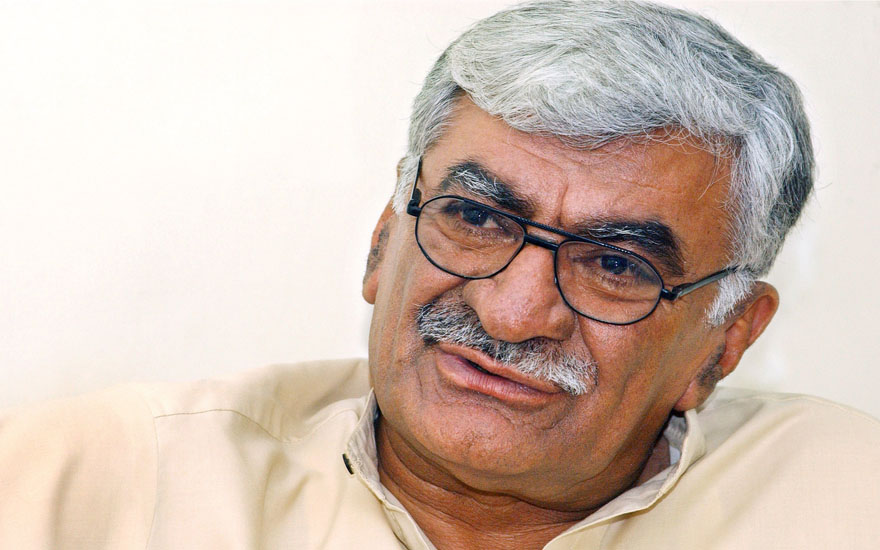 The party’s crushing defeat has pushed the ANP into the political wilderness and prompted some of its workers to call for the resignation of the party head, Asfandyar Wali Khan, and provincial president Afrasiab Khattak. Asfandyar Wali not only lost his home seat in Charsadda but trailed at third position behind the winner, Maulana Gohar Shah of the JUI-F, and runner-up, Fazal Mohammad Khan of PTI. Afrasiab Khattak, who is a member of the Senate, did not even contest the assembly election.

A few months ago, ANP was the dominant political and electoral force in KP with a visible presence in Balochistan and Sindh. It was PPP’s senior partner in the coalition government in KP and its nominee, Ameer Haider Hoti, was the first chief minister belonging to the ANP as well as its predecessor nationalist parties since Pakistan’s creation in 1947. The ANP also enjoyed power as part of the PPP-led ruling coalition in Sindh, Balochistan and the centre. However, its crushing defeat has pushed the ANP into the political wilderness and prompted some of its workers to call for the resignation of the party head, Asfandyar Wali Khan, and provincial president Afrasiab Khattak. The 64-year old Asfandyar Wali not only lost his home seat in Charsadda but trailed at third position behind winner, Maulana Gohar Shah of the JUI-F, and runner-up, Fazal Mohammad Khan of PTI. Afrasiab Khattak, who is a member of the Senate, did not even contest the assembly election. Another prominent ANP member who lost was former federal railways minister, Ghulam Ahmad Bilour, trounced by PTI founder Imran Khan, despite the fact that the latter didn’t do any campaigning in Peshawar.

The PPP also lost by a wide margin. It failed to win any National Assembly seat in KP and FATA and won only three provincial assembly seats, adding a fourth to its tally by securing a reserved seat for women. The party’s provincial president, Anwar Saifullah Khan, who was aiming to become the chief minister, lost from two provincial assembly constituencies in his native Lakki Marwat district. In fact, the Saifullahs failed to win any seat as even his brother Salim Saifullah, the PML-N candidate for the National Assembly seat from Lakki Marwat, lost to the JUI-F head, Maulana Fazlur Rahman.

The JUI-F also suffered at the hands of the PTI as several of its candidates considered front-runners in their constituencies were defeated by unknown young men fielded by Imran Khan. Maulana Fazlur Rahman was confident that the JUI-F would emerge as the single largest party in the province as he felt it was his party’s turn to rule KP after the expected defeat of the ANP and PPP in the polls. But that didn’t happen, and so shocked was the Maulana by his defeat that he refused to accept PTI’s mandate to rule the province. He had done his utmost to stop PTI’s march to victory by telling voters that voting for Imran Khan was un-Islamic as he was “a Jewish agent.” He also got some religious scholars to issue a decree before the polling day to question Imran Khan’s beliefs in regard to the finality of Prophethood after accusing him of having a soft corner for Ahmadis. One of the scholars, Maulana Sher Ali Shah, later withdrew his ‘fatwa’ after talking to Imran Khan over the phone. The decree and Maulana Fazlur Rahman’s appeal to the electorate didn’t work as voters, including an unprecedented number of women, came out in record numbers to vote for the bat symbol without even bothering to find out about the candidates fielded by the PTI. It was a vote for Imran Khan as the voters seemed determined to punish the ANP and PPP for misrule, poor governance and corruption, and to refrain from giving a chance to parties such as the JUI-F, Jamaat-i-Islami (JI) and PML-N, who have been tried in the province in the past and have failed to deliver.

Though the JI made a comeback in its strongholds of Upper Dir, Lower Dir and Buner after having boycotted the 2008 general election, it too lost some seats to the PTI which it was hoping to win. After the election, the JI made an alliance with the PTI for formation of the provincial government by adding its eight provincial assembly seats to the PTI’s 55. It was rewarded with three berths in the cabinet and some of the choicest portfolios, including finance, which will be handled by the JI’s central deputy head Sirajul Haq, who was also a senior minister in the previous KP government.

Aftab Sherpao’s Qaumi Watan Party (QWP) also lost a few seats to PTI candidates in the polls. It won 10 seats in the provincial assembly and later made a deal with the PTI to become part of the coalition government. In return, it too was given three cabinet positions with Sherpao’s son, Sikandar Sherpao, hoping to be designated as senior minister for the irrigation, power and energy portfolio.

Though it has performed well in the area, the PML-N conceded seats to the PTI in its stronghold of Hazara division, after having been put on the defensive by those demanding the creation of a Hazara province. The PTI won two out of the seven National Assembly seats from the Hazara division and bagged a few provincial assembly seats as well at the expense of PML-N. 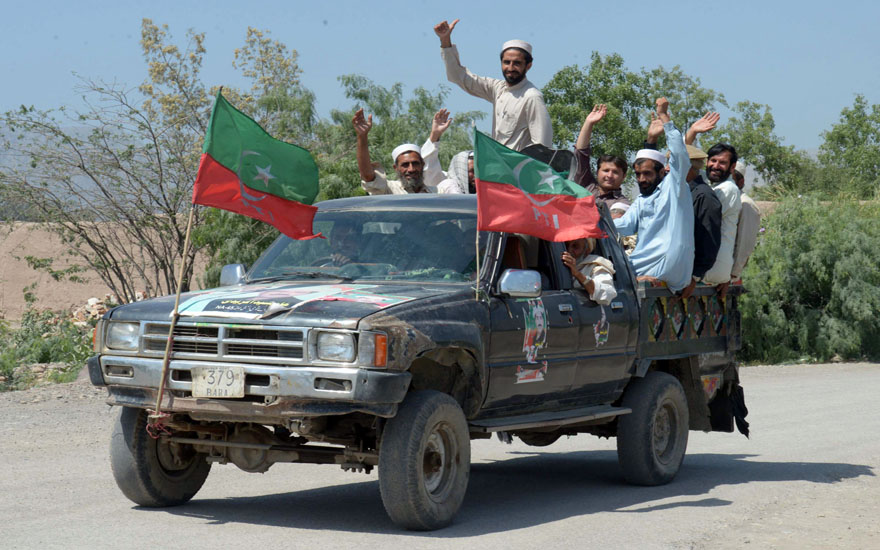 Voters, including an unprecedented number of women, came out in record numbers to vote for the bat symbol without even bothering to find out about the candidates fielded by the PTI. It was a vote for Imran Khan as the voters seemed determined to punish the ANP and PPP for misrule, poor governance and corruption, and to refrain from giving a chance to parties such as the JUI-F, Jamaat-i-Islami (JI) and PML-N, who have been tried in the province in the past and have failed to deliver.

The PTI will have to strike a balance between its ‘old’ and ‘new’ members while putting together the cabinet as the loyalists associated with the party for many years are opposed to giving a major share to the newcomers. Pervez Khattak’s nomination by Imran Khan for the chief minister’s office also generated controversy as the old party activists were hoping that Asad Qaiser, who has been with the PTI for almost 17 years, would be given the job. Another argument made in Qaiser’s favour was that he had defeated Pervez Khattak, who joined the PTI 18 months ago, in the intra-party election for the office of the provincial president and was, therefore, more popular and deserving for the chief minister’s job. Though Imran Khan managed to satisfy Qaiser by offering him the speaker’s position, the tussle between the old and new members of the PTI is far from over and is likely to resurface.

PTI, as the senior partner in the coalition government, is now being put to the test. However, it cannot have a free hand in implementing its manifesto as its allies — QWP and JI — would also want to implement their own manifestos. The resource-deficient KP would also have to maintain friendly ties with the PML-N led federal government, which will not be easy if the PTI doesn’t let go of the bitterness of the election campaign. Restoration of peace in the province would have to be PTI’s top priority to be able to do anything meaningful in terms of implementing development projects, undertaking reforms and attracting outside investment. However, the peace process cannot move forward without the support of the federal government and military, as FATA — the stronghold of the Tehreek-i-Taliban Pakistan (TTP) — is federally administered and beyond the jurisdiction of the provincial government. Ensuring an end to the US drone strikes, halting Pakistan army operations in FATA and talking to the Taliban are foreign and security policy issues with regional implications which only the federal government would have the authority to take decisions on. The PTI’s success or failure as the ruling party in KP would be the yardstick by which the electorate in the other three provinces would decide whether to vote for it in the next election or not.