How did FAFEN monitor the elections? And how did you recruit and train your staff?

We had District Long-Term Observers (DLTOs) in every district who started work in February. And for the day of the elections we had Short-Term Mobile Observers who each covered three different polling stations. We also had Short-Term Static Observers who remained in one station all day. And then in each district, we assigned a supervisor who oversaw the observers in the area. We had a detailed checklist for each kind of observer and these checklists were then uploaded to our central information system. And we had staff in Islamabad randomly cross-checking the information that was coming in.

We started this process seven to eight months ago. FAFEN comprises 42 national NGOs and each of these member organisations has been working extensively in the various areas. We have formed Constituency Relations Groups and also have youth working in various districts. We provided them all with training — although we now believe the training process should have been longer since we had around 42,000 observers. These observers were hired through our partners in each constituency.

FAFEN initially reported that there was more than a 100% turnout in 49 polling stations only to then retract that statement. What happened?

This is not the first time FAFEN has reported a voter turnout of over 100% and we also reported this in the 2008 elections. I also wrote about this but nobody took notice. The Election Commission of Pakistan (ECP) did not follow up on it and I would like to ask ECP if they have the records of the 2008 elections. If so, they can verify the voter turnout in those polling stations.

To understand why there were inaccuracies, you must know that all presiding officers are required to submit a Statement of Count, also known as Form XIV. I have a copy of Form XIV from NA-50 in front of me, which bears the presiding officer’s name and thumbprint impression. However, the presiding officer has not mentioned how many male and female voters were assigned to the station, and she’s tallied the total votes polled to be 697 whereas I calculated them to be 209. This kind of work, being done by presiding officers, has created an atmosphere of confusion. Also, the Returning Officers changed and merged polling stations without informing the ECP, so the polling scheme on the ECP’s website was outdated.

The ECP has responded to FAFEN’s report on the more than 100% voter turnout by uploading statements of counts from those polling stations on their website. They have uploaded a Form XIV which states that 982 votes were cast in a polling station, but when I counted it was 998. While it’s not a vast difference, it is still inaccurate. And you should know that you can win a seat by even one vote. There is another Form XIV which states that there were a total of 403 votes, but if you tally all the votes it only comes to 250. Also, hundreds of presiding officers submitted their tallies on white paper instead of the official form, which has resulted in a lot of confusion. I demand that the ECP take action against such presiding officers.

Once you retracted the statement, FIRs were charged against FAFEN and you also received threats.

From Lahore’s NA-122 constituency, PML-N’s Ayaz Sadiq phoned Muddassir Rizvi (CEO of FAFEN) and threatened him saying, “I will see how you live in Pakistan now.” We later traced that call back to him and he even admitted to threatening Muddassir. Two FIRs were registered in Rahim Yar Khan and 12 were registered in Lahore in various police stations. However, the sequence of sentences and the wording were the same in all the FIRs. So perhaps the man who threatened us earlier is behind all these FIRs.

FAFEN has also been accused of deliberately misleading people and that, since it is funded by the western donors, it might be pushing a foreign agenda.

This is all propaganda. Our very own ECP also gets foreign funds. So does our army. Therefore, people who live in glass houses should not throw stones. There is nothing wrong with getting foreign funds as long as they are used to serve the country’s interest.

Also, we didn’t issue any report to malign a specific party. The polling stations, which we reported with more than a 100% turnout, had winning candidates from various parties, including PTI.

In my view, these have been the most controversial elections since the ones in 1977. Right now, the PML-N is complaining that the elections were rigged against them in Sindh. JUI-F is protesting in Balochistan and KP. It seems that every party has had some complaint or the other about the elections. According to some credible sources, ECP has received more than 8,000 complaints — an unprecedented number.

However, the Human Rights Commission of Pakistan (HRCP) issued a statement saying it found no evidence of systematic rigging.

They did say that but in their preliminary report they have also said, and I quote, “HRCP finds flaws in polls.” The same report also concludes that the these elections were “poorly managed.” It is very difficult to prove if there was systematic rigging but as I mentioned earlier, most parties have had some complaint or the other. And FAFEN too has serious doubts about the Statements of Count.
If the ECP itself can upload forms on their website in which the numbers do not tally, then I have every reason to doubt the results. FAFEN demands that the ECP upload all official Statements of Count on their website. Our second demand is that all the presiding officers who presented their tallies on white paper as opposed to the official Form XIV should be taken to task.

Do you think ECP has adequately explained why there were delays in polling stations in NA-250, amongst other mismanagement concerns?

On May 11, I was in Karachi and I have yet to hear an explanation from ECP as to why polling didn’t start on time. The Chief Election Commissioner was in Karachi at the time and many high officials had their own polling stations in NA-250. Why did ECP not take action? Who was stopping them? Through Newsline, I would like to ask the ECP about the 500 monitoring teams they deployed for the elections, as mentioned on their website. I would like to get those monitoring teams’ reports uploaded on their website to read what they had to say about the elections.
Also, why was there a need to extend polling by one hour in the country? The extension was unnecessary and created confusion. Once you are in the queue you have the right to vote, even if it is after 5pm. 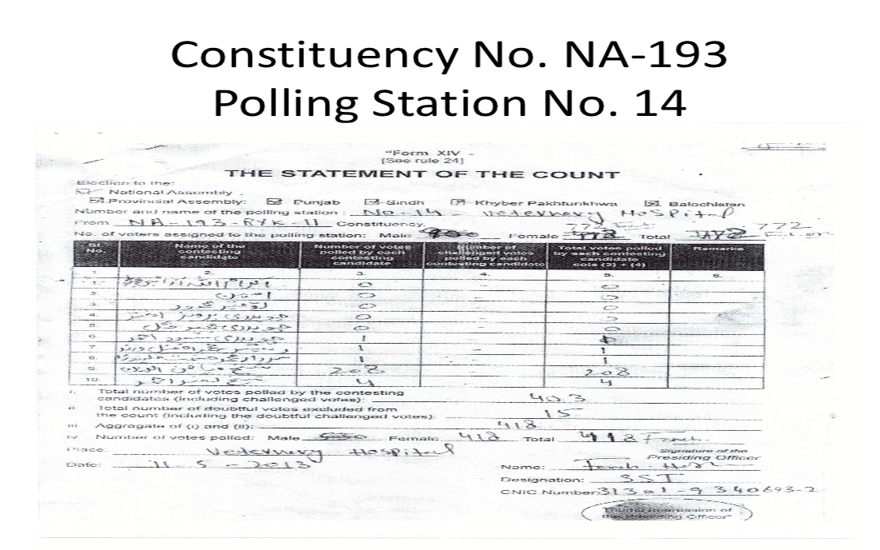 “If the ECP itself can upload forms on their website in which the numbers do not tally, then I have every reason to doubt the results. “

There has been very little coverage of the elections in Balochistan. What are FAFEN’s observations from the province?

Monitoring elections in Balochistan was not easy. The voter turnout was very low even though the ECP is showing a higher turnout. Some people secured seats by winning just a few hundred votes. And now they are going to represent the people in the assemblies — why should such elections be accepted?

What is FAFEN doing post-elections?

We have demanded that we be allowed to monitor the hearings in the election tribunals and are planning to deploy observers. So yes, we will be following up on the rigging complaints. And I think there should also be a follow up on the issue of presiding officers not submitting the official Form XIV.

But I would also like to underline that I do not think the ECP is entirely at fault in regard to the presiding officers. The district returning officer and the presiding officer are not in control of the ECP. They are judicial officers and they report to their high courts whearas the presiding officers are basically answerable to their own departments. Therefore, the ECP has very little control over the polling staff officers. This is a major problem in our election system and must be addressed. Moreover, as far as preparing of electoral rolls and elimination of fake voters is concerned, the ECP did a credible job.